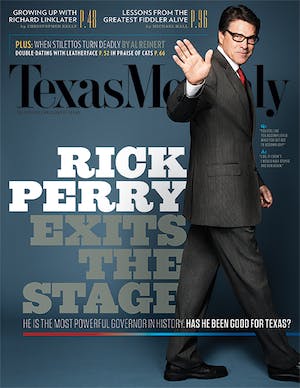 Have you ever done a steak tasting? I don’t mean just spearing a piece of meat off a friend’s plate so you can compare his sirloin strip with your ribeye. No, I mean something more like a wine tasting, where you thoughtfully plan a sampling of several steaks, from light to robust. At most steakhouses, where the highly laudable goal is consistency, a steak tasting can go only so far. But at Knife, Dallas’s wildly popular new meat mecca, totally different steaks come from three purveyors and are cooked in two distinct ways, which makes for some pretty fascinating back and forth.

Open barely two months, Knife is what’s often called a modern steakhouse, and the buildup to its arrival has been intense. The guru of the operation is John Tesar, age 56, a chef who started his career in New York, then came to Texas in 2006 and famously bounced around from Dallas (the Mansion on Turtle Creek) to The Woodlands (Tesar’s Modern Steak and Seafood) to Dallas again (the Commissary), eventually opening seafood restaurant Spoon, in late 2012. After Spoon became a major hit, Tesar was approached by the Kimpton hotel group and asked if he would do a steakhouse. Interested, but not in doing the same old thing, he embarked on a gluttonous R&D tour to see what was going on in contemporary meateries around the country.

Of his many check-ins, the key one was Mario Batali’s Carnevino, in Las Vegas. There he had the massive Riserva, a ribeye that’s dry-aged for an unheard-of 240 days. Blown away by its depth of flavor, he came back determined to incorporate a 240 into his plans for Knife, making its menu the perfect expression of the barbecue-worshipping, charcuterie-nibbling, snout-to-tail times we live in.

Happily, man does not live by meat alone, so when friends and I sat down at one of Knife’s oversized tables, the first thing we tried was a sampler of crudités—locally sourced infant carrots, celery, endive, and radishes accompanied by a punchy green goddess dip. We debated trying some of the surf offerings, like raw oysters or crudo, but we settled on an old-time crowd-pleaser, French onion soup. Mild and onion-sweet, it would have been just right except for a thatch of molten Gruyère so thick it could have roofed a cottage in Wales. Next came a salad of watermelon and heirloom tomatoes. A dusting of Spanish-olive-oil powder was great fun, but some of the tomatoes had gone mushy.

Strive as we might for variety, though, we kept going back to meat. The bacon tasting was, frankly, silly and expensive (which didn’t keep us from eating every last morsel), but the splendid nine-item charcuterie board was a steal at $24, with everything from fat-dappled Genoa and Tuscan salami to a sybaritic chicken liver mousse.

If someone in your group is just not a beef person, there are some intriguing pork entrées, including crisped meat from an eighteen-hour-braised pig’s head and wonderful sriracha-dabbed pork belly on lightly toasted Chinese buns. There’s also a serious triple play in the bacon-crusted bone marrow with San Diego uni, which should be brought to the table by a team of EMTs armed with defibrillators. The juicy whole chicken, roasted to order and served sliced atop a panzanella salad, does nicely for fans of white meat, but I found it a little monochromatic; a good way to remedy that is with a side of the terrific smoky roasted okra.

When all was said and done, though, we were there for a steak tasting, so we started with the least-pedigreed of the lot, the Black Angus flatiron (one of several steaks from 44 Farms, in Cameron). This is not just a bargain at $25, it’s a really tasty little steak. Wet-aged, it’s first moist-roasted at a low temperature, then finished over red-oak coals. Next we moved up a considerable notch, to the 32-ounce Akaushi ribeye. Supplied by HeartBrand Beef, in Yoakum, and priced at $95 for two eaters, it is conventionally dry-aged for 45 days, seasoned only with salt and pepper, and broiled. A connoisseur’s steak, it was lovely, but perhaps because of the amount of marbling, it actually had a less beefy flavor than the flatiron.

The best, however, was yet to come. (Bummer alert: this steak was the last one until October, when the supply from Niman Ranch finishes aging in-house.) Borne like a jeweled scepter from the Tower of London, the 240 ribeye arrives on a stark white platter in all its carnal glory. The color is closer to burgundy than red, a sign that moisture has evaporated, concentrating the flavor. Worshipfully, we each cut a bite. The meat was tender but firm, and the aroma earthy, like truffles and blue cheese (a refined Stilton more than a rambunctious Roquefort). The flavor was intense, and if I hadn’t known it was beef, I might have guessed elk or ostrich. It was that different. Like a fine brandy, this is a piece of meat to be savored, not to mention shared, which makes the price—$80 per inch of thickness—easier to swallow.

We took a break after the steaks so that Tesar could give us the meat nerd’s tour of “the box,” his custom refrigerator where the current batch of uncut ribeyes sit on open shelving, getting ready for their close-up. Meticulous cleanliness and climate control—36 degrees and 40 percent humidity—encourage the growth of a special white mold like the dusty-looking coating on hard salumi. Unlike the more-usual black mold, white mold allows a steak to age far longer, so that enzymes break down the connective tissue and the flavor is even more concentrated. The result is steak to the nth power.

Back at the table, fighting off a collective meat coma, we could manage only a bite or two of pastry chef David Collier’s signature Brûlée 2.0, a deconstructed tour de force consisting of brittle burnt-sugar tubes filled with sumptuous vanilla custard and accented by tart raspberry pearls.

As we left, I took a look around, realizing I had been so intent on the meat I had barely paid attention to the pleasant, modern room, with faux-finish wood paneling, industrial-style pendant lights, and a lounge with curvy taupe banquettes. Oh well, that just meant a return visit would be necessary. So many steaks, so little time.