L et China celebrate the Year of the Rooster. In Houston, 2017 will be known henceforth as the Year of the Steer. In a six-week period spanning December 2016 and January 2017, two titans of the local food scene, Ronnie Killen and Chris Shepherd, made major plays for the heart, soul, and arteries of Texas’s largest city. Killen’s entry is named STQ; the initials stand for “steak” and “bbq.” Shepherd’s baby, not yet open at this writing, will be called One Fifth Steak. Predictably, interest in the projects has verged on the hysterical. STQ’s reservation service logged more than four hundred bookings in its first hour. To paraphrase social commentator H. L. Mencken, no one ever went broke overestimating Texans’ lust for beef.

With that in mind, I walked into three-week-old STQ shortly before nine o’clock on a weeknight and stopped dead in my tracks. It looked nothing like a steakhouse! Mind you, Killen knows what’s expected in a meat palace, because he already has a huge one bearing his name in Pearland, with the expected gravitas and four-figure bottles of wine (actually, most of the list is extremely reasonable). At little STQ, there are nods to class consciousness (Frette linens, For-​tessa black flatware), but almost nothing has been done to the weathered wood siding and white subway tiles of Bramble, the location’s previous occupant. Why in the world would Killen not bother to remodel? He likes it the way it is: “It’s smaller and more modest,” he says. “It’s named STQ, but we’re more than those two things. People don’t know it, but I went to the Cordon Bleu in London and Paris. I worked at Omni hotels in Houston and Dallas and at a Ritz-Carlton in California. I like to cook Italian. I didn’t want to be hemmed in. Here, I can get back to my roots.”

As it turned out, my friend David and I had arrived way early. So we ordered a few appetizers and proceeded to parse the menu. It’s a revealing document, with greatest hits and new dishes, unified by strong Texas tics. The black-eyed-pea gumbo taps both soul-food and Cajun traditions. There is a nod to Mexican food with a short-rib tamal and brisket chili. The Deep South is represented by Vidalia onion soup. There’s even, gasp, a chicken-fried ribeye, which sounded like a waste of both a good steak and a panful of cooking oil.

After some debate, we settled on the Gulf crab cake (pictured), large pinky-white pearls of pure crabmeat lightly breaded in panko and sitting in a sybaritic pool of lemon-chive butter. Next, we distracted ourselves with an order of ravioli, the genius of which was its lush corn-milk sauce—that and strategic dabs of bacon jam on the corn-filled pasta packets. When our friends texted us that they were just a few minutes away, we hurried up with one last order, a bowl of tomato bisque, which is made from tomatoes that have been roasted over the sweet, mild smoke of smoldering hay (an ancient method made world famous by Copenhagen’s Noma). Submerged in it were toasty little American-cheese croutons, which took us back to the Campbell’s Soup commercials of our collective youth.

But then Mimi and John arrived, and it was time to get serious. Fortunately, STQ’s servers are well trained, because it takes a degree in meat science to read a contemporary steakhouse menu. Do you want a wet-aged or dry-aged steak? Is 21 days fine or is 28 days better? Do you want your beef from American or Japanese cattle—perhaps a cross between the two? Do you care about the farm that supervises the finishing? That affects the final flavor, you know. What about off-the-menu super-premium Japanese Kagoshima A5 beef, which can be yours for only $20 an ounce?

Our mission was to try as much variety as we could, though, so we started with the dry-aged long-bone pork chop. With an ax handle–like rib bone (ours must have measured five inches long), it’s not called a tomahawk cut for nothing. After oohing and aahing the presentation, we asked for the chop to be sliced. It returned to the table properly tamed, with a thin, lightly seared fatty edge embracing tender, well-marbled meat, just what you would expect from Duroc heritage hogs. 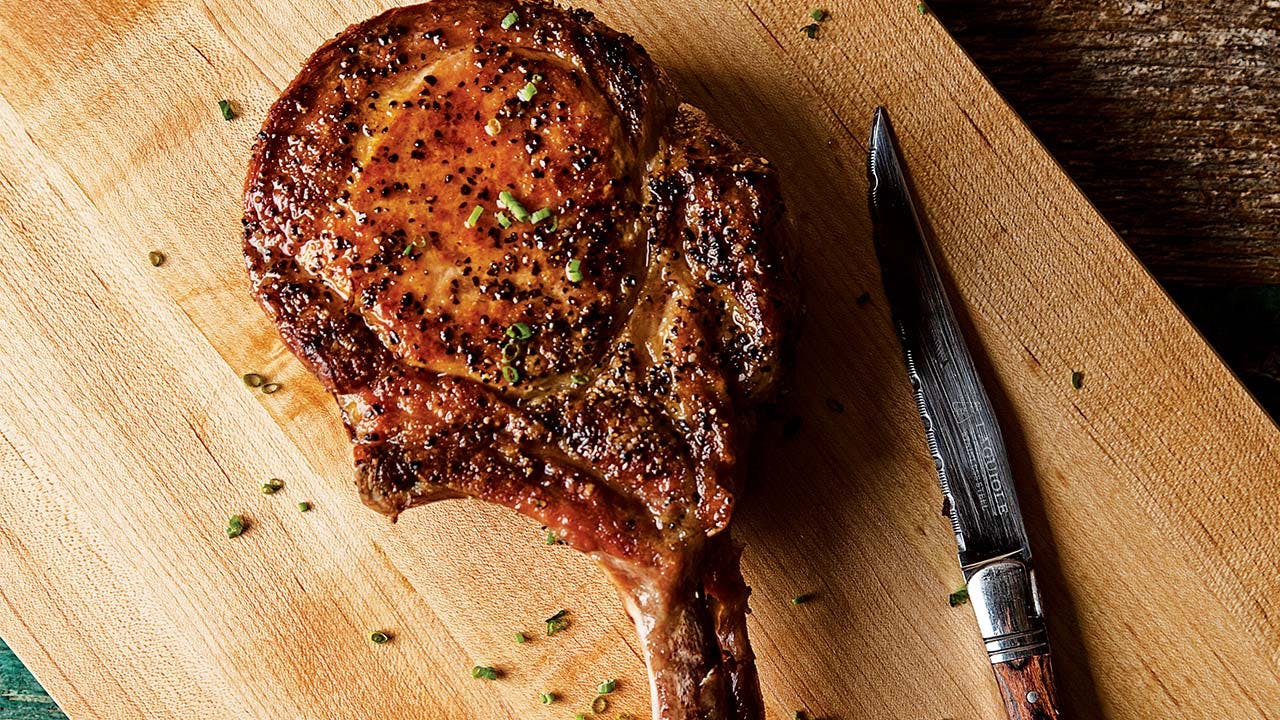 Mindful of the “Q” part of the restaurant’s name, we next ordered the smoked brisket pappardelle. Briefly simmered tomatoes and shiitake mushrooms made for a much lighter sauce than the usual marinara, but it had the effect of masking the taste of the brisket, which might as well have been sausage. Our next order, Maine lobster tail and claws, sounded like a good idea, but something had gone seriously awry. Probably we just got a bum lobster, but the texture of the claw meat was so mealy, and the flavor so off, that I fervently wished I had ordered the red snapper. On the bright side, that left more room for our choice of steak: the fourteen-ounce wagyu-Angus cross, raised on the Strube Ranch near Pittsburg, Texas. Flawlessly cooked a tad more than rare on a wood-burning grill, deep red under a peppery, salty crust, it had the scandalous richness of a ribeye and the tenderness of a filet. In short, it was fabulous. I looked at the $80 price tag and thought, “Hmm, that’s not so bad.”

But man does not live by meat alone, and we covered the rest of the table with sides: roasted brussels sprouts spritzed with red-wine vinaigrette; a wonderful bowl of cheesy, stand-up Anson Mills grits; and smoked Gouda mac and cheese, which remained its light, milky self the entire meal.

Desserts here run to hoary crowd-pleasers, like cheesecake. I was actually happy we got talked into ordering the airy croissant bread pudding, inundated with tres leches sauce and scattered with nibs of candied bacon. But the dessert that best summed up the STQ zeitgeist was the chocolate cake, an ebony-hued tour de force served under a glass dome magically filled with—wait for it—smoke. Drizzled with milk-chocolate sauce and studded with port-simmered cherries, it resembled—and this is a compliment—a birthday cake for a ten-year-old. When the four of us finished our assault, we found we were the last customers in the dining room. Laughing, we paid up and hurried out to find our cars. It had been fun ushering in the Year of the Steer.