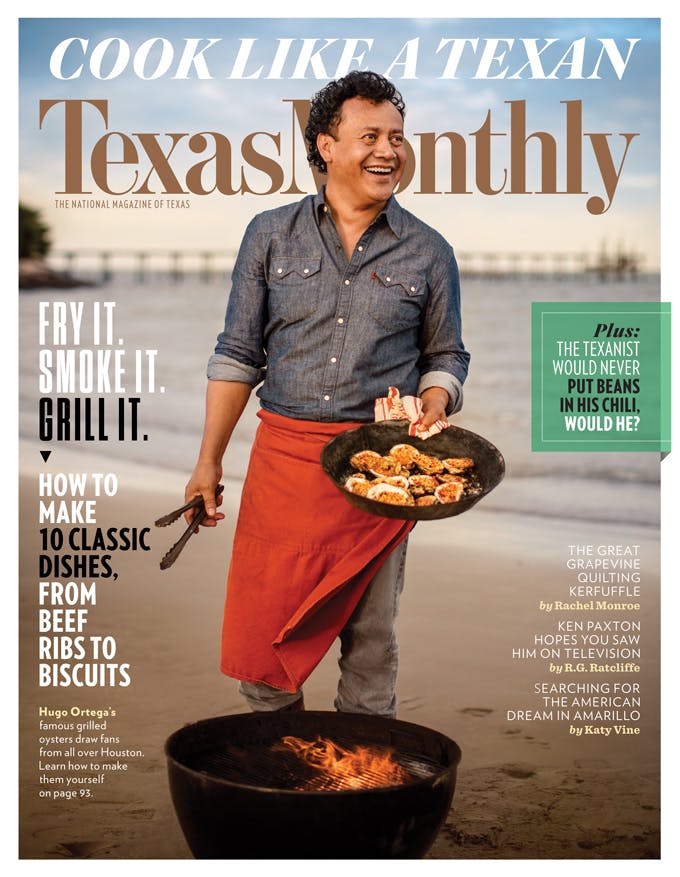 Chef Hugo Ortega of Houston came away with the honor for Best Chef: Southwest at the James Beard Awards, held Monday night in Chicago. It was a long-awaited win for the 51-year-old chef, who had been on the finalist list for past five years. Ortega and his wife and business partner, Tracy Vaught, are the owners of several restaurants in Houston, including three with a Mexican orientation: Hugo’s, Caracol, and Xochi. They are also partners in Origen, in Oaxaca.

Presented at a black-tie gala at the Lyric Opera of Chicago, and attended by the who’s who of American chefs and restaurateurs, the awards are the most prestigious in the American restaurant industry.

In his acceptance speech, Ortega got a burst of applause from the audience when he dedicated his award to the “great city of Houston” and said, “America is beautiful and I am living the dream.” He came to Texas as a teenager in 1984, working as a busboy and then as a line cook and, finally, as a chef at Backstreet Café, part of the restaurant group owned by Vaught. She recognized his talent, encouraged him to further his culinary education, and the two eventually fell in love and married.

In 2002, they opened Hugo’s, focusing on the cooking that Ortega, who grew up in a village in Mexico two hours from the culinary capital of Oaxaca, had learned from his mother and grandmother. The restaurant introduced Houston to the flavors of true Mexican cooking and became a dining destination. Its success gave rise to a Mexican seafood restaurant, Caracol. In 2017, right before the Superbowl, they opened Oaxaca-oriented restaurant Xochi in the Marriott Marquis Hotel in downtown Houston. Its menu is the most indigenous of all the couple’s efforts, with earthy mole sauces and dishes featuring grasshoppers and other insects as garnishes, as well as more-mainstream ingredients.

Texas has made a strong showing in the Beard awards in recent years, having won five in the Southwest category between 2011 and 2016. This year four of the six chefs who made the finals for Southwest were from Texas. The full list included, besides Ortega, Bryce Gilmore of Barley Swine in Austin; Jianyun Ye of Mala Sichuan Bistro, in Houston; Martin Rios of Restaurant Martin in Santa Fe; Steve McHugh of Cured in San Antonio; and Steven Redzikowski of Acorn in Denver.

Indeed, Texas has been on a roll since 2011 in the regional chef awards, winners including Justin Yu of Oxheart in Houston in 2016; Aaron Franklin of Franklin Barbecue in Austin in 2015; Chris Shepherd of Underbelly in Houston in 2014; Paul Qui of Qui in Austin 2012; and Tyson Cole of Uchi in Austin in 2011. Prior to that, there had been a seventeen-year drought, with the last Texas winner being Dean Fearing of the Mansion on Turtle Creek, in Dallas, in 1994.

To recap the highlights of the ceremony, the Best New Restaurant award was picked up by Le Coucou in New York; Outstanding Chef was Michael Solomonov of Zahav in Philadelphia; and Outstanding Restaurant was Topolobampo in Chicago.