Of all the parts of America’s economy that have been sucker punched by the coronavirus, few industries have been harder hit than restaurants and bars. And yet, few have been quicker to extend a helping hand to their own. In large cities across the country, hunger relief services have sprung up to help feed laid-off servers, cooks, busboys, bartenders, and managers.

In Texas, one of the first to launch was HospitALLity House, in San Antonio, which has been serving hot meals six days a week to members of the industry since March 20. It’s a joint project of Culinaria, a local nonprofit that in happier times puts on festive events to promote culinary education, and 43-year-old chef Jason Dady, who until last month had six thriving restaurants. Not only is he down to two that are still open, but he’s handing out free soup and sandwiches where he once sold $15 barbecue plates.

Suzanne Taranto-Etheredge, president and CEO of Culinaria, said, “Jason and I started talking about hunger relief a few weeks ago,” because they could see what was on the horizon. “Pretty quickly, we realized we should join forces.” Culinaria is now funding HospitALLity House, and Dady and the few employees he has left are prepping the food.

Funding has come from the private sector. “We had received around $30,000 in individual donations as of April 6,” says Taranto-Etheredge. But the bulk of support has come from corporate donors and local restaurants. Perhaps the most significant has been national restaurant supplier Sysco. “Between food and cash donations,” says Taranto-Etheredge, “Sysco has probably given $100,000—it’s unbelievable.” Another prominent participant has been Silver Eagle beverage distributor (which explains why people in line can get a cold Corona or Bud Light with their free meal).

Such generosity has allowed the relief effort to expand beyond central San Antonio. At the beginning of April, hot meals were also being handed out at Palenque Grill and Sweet Paris at the north side’s Shops at La Cantera. Upcoming dates are being posted on Culinaria’s Instagram account. Arrangements are also under way to provide chefs meal kits with groceries to pass along to their furloughed employees.

But the most regular meal service remains HospitALLity House. In late March, Dady talked to Texas Monthly about how it has changed his life. (For a look at what restaurants and organizations in other cities are doing, we’ve highlighted some here.)

“Folks Are Lined Up Before We Open”

This is my new life: I wake up every morning at seven o’clock, check the news, and go make thirty gallons of soup.

We kicked HospitALLity House off on Friday, March 20, and we’ve been averaging three hundred and twenty meals a day. But I know the line will get longer. A lot of people got their last paycheck at the end of March.

We’ve done brisket sliders, chicken salad sandwiches, pulled pork. No two days are alike. Sometimes there’s fruit, sometimes chips, and there’s either cold water or beer. We’re not trying to be cheffy, just serve a hot, wholesome meal. The food’s cooked fresh every day, and Bakery Lorraine has been donating their amazing breads and either cookies or desserts, like parfaits.

We’re set up on the porch of Alamo BBQ Company, which is our former barbecue place just north of downtown. I try to get over there early so I can get the water and beer iced down and the soup heated up. We started out doing two meals a day, but now we’re doing one. It runs Monday through Saturday from four to seven, and folks are lined up before we open. I’m up on the front porch, and the line forms in the front yard. It’s marked at intervals with cones placed about six feet apart.

People walk up one at a time and I ask them how many meals they need. Then I hand them covered containers and beverages and send them on their way—hopefully to go practice social distancing [laughs]. We’re using lots of sanitizer. I’m wearing a face mask. Even a long-sleeved shirt—I’m probably being overly cautious. Two of our employees are assembling meals inside, so they don’t get exposed to anything. There’s been an outpouring of support from people wanting to volunteer, but we’re keeping it small to limit contact and be super-safe.

“Keep Your Money in Your Wallet”

Every day I see uncertainty and fear on people’s faces, them not knowing what’s next. That’s why I’m trying to be super jolly—like “How are you doing!?” and “Have a great day!”—because they need to keep their spirits up and stay strong so we can all pop back up when this is over. I also don’t want to anybody to be embarrassed or feel like “I’m not homeless! I don’t need a free meal!” That’s not what this is about. We’re just saying, “Keep your money in your wallet and allow us to give you a bite today.”

The people we’re seeing are all over the board. There might be a family of four, say, a mom and a dad who worked in a restaurant and their two children. There are a lot of millennials, for sure. People in their early twenties are the biggest demographic. They worked for Chili’s, the Cheesecake Factory, Pappadeaux, steakhouses. I’ve had several housekeepers from hotels. I’ve also seen people who used to work for us.

As of about March fifteenth our company had six restaurants, five in San Antonio and one in Austin. Now we have two, both doing pickup. We had two hundred and fifty employees; now it’s down to fourteen. It was gut-wrenching to let our people go, knowing how hard they had worked and how much they cared.

It Started With Clam Chowder

When the city of Chicago shut down its restaurants, I knew it was just a matter of time. We closed our own places early in the game, in mid-March. But even before that happened, I had begun talking with Suzanne Taranto-Etheredge, who’s the president of Culinaria, about starting a meal relief program for the local hospitality industry.

It all became very real when we shut down Range, which was our largest place, a steakhouse downtown. That night or the next—the days are a total jumble—Jake and my wife Crystal and our director of culinary operations Margeaux Alcorta and I drove over there and started physically separating all the food in the kitchen into piles. What do we freeze? What can we pickle or braise? What do we give away? Throw out? We managed to save about ninety percent.

Once we had it all spread out, I realized we had a ton of clams, a ton of potatoes and onions, and a ton of cream. I was like, okay, I’m making clam chowder! That ended up being the first thing we served at HospitALLity House. We loaded everything into our catering van and my pickup truck and moved it to our commissary kitchen and Alamo BBQ.

The first three days, my brother Jake—he’s my business partner and also a chef— and I literally went and bought other necessary food and paper supplies every morning. But Culinaria stepped up right away and has been fantastic. They provided grants to pay our two cooks and buy other stuff we needed. The biggest thing they’ve done is get corporate sponsors. They brought on Sysco, which allowed us to do these great burger packages one day. And we’re getting donations from local restaurants. The Boiler House gave a bunch of really nice desserts. The Cheesecake Factory donated six hundred slices of cheesecake. Silver Eagle is providing beer.

And we have private individuals too. Several of our regular customers have pitched in with money, which has been awesome and very humbling. One donated five thousand dollars—that’s food for a week. Honestly, I think I would go crazy if I didn’t have an interest like this that was consuming me at this point. Restaurants everywhere have fallen to their knees, and we’re all faced with things we don’t want to deal with. Besides, as I keep joking, I don’t want to be stuck at home all day yelling at my kids. I want to cook for people and take care of them.

Meet the Kids—and the Dogs

Speaking of kids, there has been one little bright spot in all of this. Apparently, I opened my big fat mouth and said I would do a series of demos where I cook a meal in nineteen minutes every day for nineteen days. It started last [month] and is called “COOKING-19,” playing off COVID-19, of course. So, after I finish up at HospitALLity House, I’ve been sprinting home to do a Facebook Live video.

It starts around 9 p.m. and is super informal. One night I showed how to make fried rice; another time I did a little knife sharpening demo. Crystal and the kids—we have two teenage daughters and a ten-year-old son—are there in the kitchen, laughing and commenting; we even put the dogs on. It’s a nice distraction. Our kids haven’t been seeing their parents much during the day because we’re in overdrive trying to save our company. The series goes through April tenth and has been a good thing for all of us

Will Things Ever Be the Same?

What will the restaurant industry look like when things get back to normal? I’m afraid it won’t look or feel the same for years—two, five, ten, who knows? Independent restaurants will be smaller for sure and have lower price points—the ones that survive.

So much depends on what the federal government does. Nobody wants an industry bailout, but it might be the only way to save us. As for the private sector, there needs to be rent forgiveness across the board. What are landlords going to do? Sue every restaurant? But there’s no point worrying now, because we don’t know how long this is going to last. We will be lucky to reopen by June, and that’s if there is a miracle.

As for our restaurants, I feel like we’re creating a new business model on the fly every day—we’re down from a staff of two hundred and fifty to fourteen. We are doing curbside-only at the two restaurants that are still open, Tre Trattoria and Two Bros. BBQ Market, but last week we started a three-course-meal home delivery service that Jake’s running—that may end up being our salvation. Its focus is comfort food, like King Ranch chicken. Honestly, I’d never even had King Ranch chicken, but Crystal suggested it and the first day we sold fifteen orders. Maybe we’ll change the name of Range to King Range Chicken—that’s where my mind is going these days. I just hope we can save half of the six restaurants we had. If more survive, that’s gravy.

In the meantime, thank goodness for HospitALLity House. I took Sunday off, woke up Monday feeling great, and jumped back in. It’s the right thing, the humanitarian thing to do. At the end of the day, it’s the epitome of the hospitality industry.

(HospitALLity House is located at 511 E. Grayson, San Antonio. Open Mon–Sat 4–7. Proof of employment—such as a pay stub—at a restaurant or bar is required. Donations may be made here.) 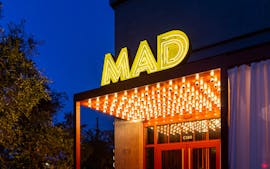 By Patricia Sharpe and Lawson Freeman 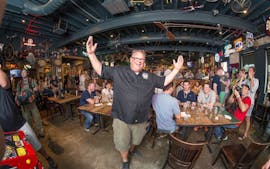