The exotic Texas feast was inspired by Seven Fires, an award-winning cookbook by Francis Mallmann, which included visual and written descriptions on roasting “una vaca entera”-­–an entire steer. “We looked at that and said, ‘That’s the coolest thing. We’re in Texas and we’re big beefeaters and cookers. We obviously have to do that,’” Louis Lambert of Lamberts Downtown Barbecue said.

Before the Texas chefs could cook the 900-pound animal, they first had to research how to build the contraption that would suspend, flip, and roast the steer on the “long, low, and slow” twenty-hour fire. The finalized contraption is the brainchild of Will Bridges and his father of the Bridges Ranch, who first studied the apparatus from Seven Fires and enlisted Spillar Custom Hitches to design and build a “bigger and better” Texas version.

“You’re roasting a 900-pound animal over open coals, and in order to suspend it and also turn it, [the device] has to be an engineering marvel,” Lambert said. “The guys went through three or four different renderings trying to reinvent the wheel, but when it was all said and done we went back to what was basically done in Seven Fires, but modernized it a bit.”

Last month, the team held a trial roast and cooked half of a steer, roughly 350 pounds. Lambert said he was “pleasantly happy” with the results and believes that a successful steer roast entails cooking each portion-–from the short ribs, rib roasts, briskets and tenderloins-–to each cut’s ideal tenderness and temperature. “It’s not extremely scientific in that you have to know by looking, feeling, and touching. For the first ten hours or so, you don’t even develop a brown, crisp crust on the steer,” Lambert said. “It’s almost instinctual, knowing when it’s done. I’ve cooked thousands of pounds in my career and all the different parts, but never all at one time.”

Seven Fires wasn’t the only place Lambert had ever heard of a steer roast. In fact, he learned through research that early Texas governor inaugurations often include a steer roast at the Capitol. He also remembers a scene in the classic Texas film Giant in which cattle ranchers spin and roast a steer on a spit. “I’ve seen photographs from the old barbecue days of it being done,” Lambert said. “In the old days, it was more economical to buy the whole steer since you didn’t have access to boxed beef. That’s why they would do the whole carcasses when they did big barbecues.”

The Vaca y Vino dinner is a culinary event Lambert and the rest of his chef crew hope to establish as an annual steer-roast, “For a guy who has cooked beef for years, I think this is going to be a fascinating experience.”

Click here for more photos of the trial roast, and watch a video below: 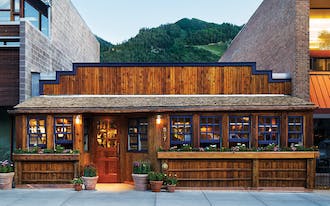 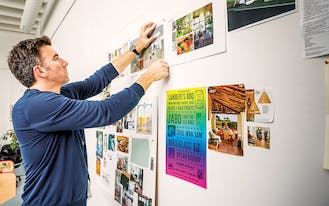 Larry McGuire, Pioneer of the New Brand of Austin Cool 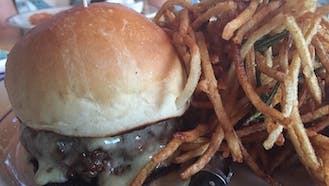 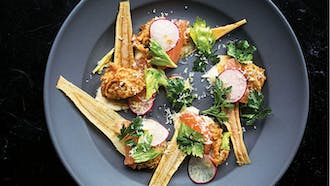