The cocktail menu at Midnight Rambler, in the basement of Dallas’s Joule hotel, is in many ways as much an artistic expression as the extensive collection of artworks showcased in the hotel proper, an ever-evolving exhibit of culinary craftsmanship. The current iteration trains its focus on spirits distilled from tree fruits, which are often overshadowed, at least in this country, by those distilled from grains or cane.

As with everything served at this bar, the Infinite Loop has a few tricks up its sleeve. The “Macintosh apple” listed in the menu description is not simply the juice of a McIntosh, though it begins that way: the fresh-pressed liquid is clarified in a centrifuge and enhanced with salt, fructose, and phosphoric and malic acids. In other words, modernist techniques are employed to help the McIntosh taste like its best possible self. (Fittingly, the drink’s name refers to One Infinite Loop, the Cupertino address of Apple Inc.’s headquarters.)

At the base of the drink is Laird’s Jersey Lightning, made by a family that operates the country’s oldest distillery, in New Jersey; Midnight Rambler co-creators Chad Solomon and Christy Pope worked with the Lairds to come up with this historically styled apple brandy. Bourbon and lemon juice are then added to the shaker, along with a mineral syrup and a saline tincture made from the so-called Crazy Water of Mineral Wells.

The cocktail’s grand finale is a spritz of “chamomile-hay essence,” which is compounded using perfumery techniques to achieve what Solomon calls “a kaleidoscope of bright apple-blossom flavors.” An egg white gives the drink its velvety texture and also provides a frothy head, the perfect canvas for that aromatic flourish.

Dry-shake ingredients (without ice) to begin emulsification. Add ice and shake vigorously. Strain into a chilled coupe and garnish with a mist of chamomile-hay essence. 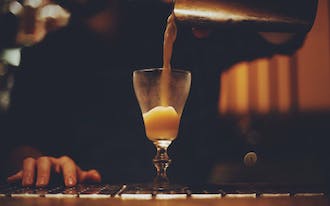 How to Ring in the New Year Across Texas