Two weeks ago, Houston Chronicle food critic Alison Cook gave three stars to Melange Creperie for its “painstakingly made French pancakes” and “inventive filling.” As Cook noted at the end of the review, this was a bit of a big deal, given that Melange is not a bricks-and-mortar restaurant. Cook even had to use the word “theoretically” before a paragraph about the food cart’s hours.

“I’ve wondered for a while now when one of Houston’s many new food trucks or mobile vendors would clearly merit the three stars that in the Chronicle’s ranking system denotes ‘one of the best restaurants in the city,'” Cook wrote. “Without so much as a table or a chair to its name, Melange Creperie deserves that distinction.”

Food trucks have become popular enough that none of the commenters on Cook’s story took exception to her choice, though one person implied that mobile restaurants might have poorer sanitation than a permanent location, a.k.a. the “roach coach” stereotype. Cook replied that Melange’s last routine inspection revealed fewer violations than the upscale institution Brennan’s.

At the Houston Press food blog, Eating Our Words‘ Katharine Shilcutt found herself making a similar comparison. Last Friday she had a meal at Ava Bar and Kitchen, Robert Del Grande’s latest restaurant, followed by a shorter, better, cheaper one at a gourmet trailer called the Modular, which on that night had been parked outside the Grand Prize Bar on Montrose.

“It is becoming increasingly difficult to ignore the impact that these small, inexpensive food trucks and chef-driven dinners are having on the city,” Shilcutt wrote. “It may be a slow process, but the way that Houstonians are eating is gradually changing. No longer willing to pay just for a name or a scene, savvy diners are looking to pay instead for an experience, for thoughtfulness, for passion, for creativity and for a more communal eating experience in which few if any boundaries exist between patron and chef.

“These people — these diners and chefs — are the future of Houston’s culinary scene. And places like Ava Kitchen & Whiskey Bar represent the past.”

Some found Shilcutt’s take on the old guard to be both unfair and inaccurate. “These young chefs and food trucks aren’t held to anywhere near the same standard as the established Chefs,” wrote commenter Ben Thayer.

The real point of Shilcutt’s call to arms was not to score points off of Ava Kitchen, but to get Houston diners to think about how they—and the local government—can make the city a place that continues to foster culinary creativity and business innovation:

In addition to . . . the continuing determination of the City to keep food trucks tightly regulated through exhaustive permitting processes and ever-increasing fees, the City also seems determined to make it difficult for small businesses like independently-operated restaurants to thrive inside the Loop — the core of the city — with revamped parking regulations that favor big-box retailers and restaurants.

But as our own Sonia Smith noted when she wrote about Melange for Texas Monthly‘s food blog Eat My Words in September, food carts thrive on foot traffic and walkable neighborhoods, both of which remain in short supply in the sprawling city. 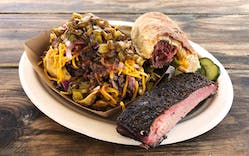 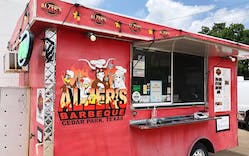 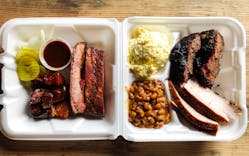 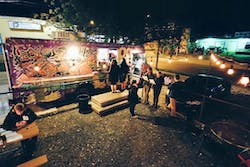