Not long before Joe Yonan published his new cookbook, Cool Beans (Ten Speed Press), in February, legumes were having a moment, from heirloom bean provider Rancho Gordo’s “bean club” to the popularity of the Instant Pot. Now, they’ve become much more than the latest food trend: with everyone stockpiling both canned and dried beans in the age of COVID-19—there’s even a #quarantinecooking hashtag—Yonan’s book is more useful than ever. In addition to including twenty pages of bean cooking techniques, Cool Beans’s 125 recipes hit on all kinds of varietals and international cuisines, from Ethiopian to Indian to Georgian.

You might not think you can eat beans every day, let alone twice a day, but when they can used for everything from ceviche, crackers, and ravioli to chocolate mousse and margaritas (as well as the expected soups, salads, and spreads), you might be wrong. Heck, you might even have to give in and not only put beans in chili, but make chili without beef, as Yonan himself now does. That’s right, he’s not from Texas.

Except he is. A San Angelo native who attended the University of Texas during the “classic Slacker years” (he graduated in 1989), Yonan grew up on T-bones and Tex-Mex. The first thing he remembers learning to make as a kid was chicken-fried steak. But a few years back, Yonan, who is the Washington Post’s food and dining editor, went vegetarian. The bowl of red featured in Cool Beans is purist to a point—ancho, cumin, no tomatoes—but subs in kidney beans and black beans for the meat.

As you would expect, Cool Beans is still especially heavy on both Texas (chili, puffy tacos, migas) and Mexican (sopes, enfrijoladas, chorizo) cuisine. The book opens with the story of Yonan’s search for a particularly elusive and spectacular pot of cacahuète beans at Maximo Bistro, in Mexico City, while he and D.C. chef Christian Irabién created a uniquely prepared black bean puree that they’ve dubbed Salsa Madre (i.e. “Mexican mother sauce”).

Texas Monthly spoke to Yonan about all things frijoles via phone from D.C. He also shared the Cool Beans recipe for what is essentially a taco salad or, as his mother called it, “Texas salad,” which she made with iceberg lettuce, canned kidney beans, Fritos, mounds of cheese, and Catalina Island French dressing. The book’s Pinto Bean Tortilla Salad is considerably different.

Texas Monthly: So, let’s cut right to the chase. You can put beans in chili.

Joe Yonan: Yeah, I went right there. I was one of you people. I’ve written plenty of things about my formerly purist approach to chili. No beans. No tomatoes. But you either have to let that go when you stop eating meat, or you have to never eat chili again. I realized that, rather than worrying about putting any beans in the chili, what if I just really went for it, and built it all around the beans? Treat it in the same way that I was always treating beef. So, it’s chili con frijoles. Some people call it chili sin carne, which is funny, but that violates a little bit of my philosophy—of not defining every vegetarian dish by the absence of meat.

Were you conscious of beans having a moment before you wrote this book, or did it kind of happen while you were working on it?

I feel like I saw something happening. I first had the kernel of the idea probably four years ago, when the United Nations declared 2016 The International Year of Pulses [legumes]. Those U.N. designations are a really big deal. They put a lot of marketing resources behind them, and they don’t do food regularly. I was like, “Oh, man, yeah. I need to do this.”

Between that, and the growing interest in plant-based eating, and a growing awareness of the effects of our dietary choices on climate change, I thought, it’s got to come together in beans. And then Rancho Gordo was an example of a hip product that a lot of people who are really into high-quality foods were already into. I was seeing all those things, and I was really hoping that they would lead to the moment. And of course, it took me a couple years to write the book, and I’m kind of glad that it did. Because it feels like the moment is now.

I’m a longtime Rancho Gordo fan, and I’ll also buy cheap dried beans, but I’ve sort of abandoned canned beans. It’s hard to accept draining that slimy liquid once you’re used to cooking beans from dry. You do take up for canned, however.

Right. I view them as a great convenience product. They’re certainly up there with canned tomatoes in terms of vegetables that are pretty good [canned]. Except for, yeah … that liquid. Both the liquid that’s in the can, and then the fact that you’re not getting that incredible bean cooking liquid, which is just so delicious, and so great to store them in.

In the book, if I feel like the canned bean can play a decent role in the recipe, I want to leave you the option. I want people to realize how incredible beans can be when you cook them from dried, and why you would want to do that. But I also don’t want them to think that they can’t make any bean recipe unless they’ve pre-thought out the cooking.

Did you discover beans in their sort of hippie Tex-Mex form in Austin?

Absolutely. One of my favorite things to eat was a bowl of black beans and rice from … oh man, why am I forgetting the name of the place? The French restaurant that was right off campus.

Les Amis! We called it “Lazy Me,” because of the speed, or lack thereof of the servers, who would be breaking up with their boyfriends on the public phone rather than refilling your water glass. But they had black beans and rice topped with salsa and cheese, for … God, I think it was like three bucks. And I was poor, and it was huge, and I could eat that and have a beer and and be super-satisfied. There was also great beans and rice at Mother’s.

Everybody knows and loves enchiladas, but it feels like enfrijoladas are still not nearly as well known to people as their culinary cousin.

That was really one of my gateway dishes for realizing just how kind of incredible beans can be. For people who have never had them, if you just describe them as, “if enchilada means dipped in chile, think about what frijoles means,” then they start to get it. They’re so delicious, and it’s just a perfect use for beans.

So when and how did you become a vegetarian?

It happened pretty gradually. It was about seven or eight years ago. I happened to be having some people over for dinner. I was trying to decide what to make, and I opened up my fridge and my freezer, and noticed that I had all this beautiful, humanely raised farmers-market meat. And it just struck me that I was always waiting for people to come over to cook it. I came to the realization that I was really trying to not eat meat when I was at home. Partly, I think, out of a sense of eating “clean” at home so that I could make up for all the eating, including meat, that I was doing in restaurants.

And as soon as I realized it, it also kind of hit me that I had been feeling a lot better, and had a lot more energy. So I just started paying attention to it and moving more in that direction, and over the course of about a year, just pretty much dwindled off to nothing. So it started with a bit of a health focus. And environmental. And then a little mix of concern for animals.

And the recipes in the book are vegan, but with dairy options?

Right. I’m probably about 75 percent vegan, which I think to a large part just comes with more experience and sophistication in vegetarian cooking. When I first was cooking vegetarian meals for myself, the way that I thought I needed to make them satisfying was to either put an egg on them or douse them with a lot of cheese. But I think as time goes by you just learn more and more about the inherent qualities of vegetables, and how to make them shine. They just don’t end up needing anything.

And beans, as much as people might find this hard to believe, do not require a piece of pork to be delicious. They have an inherent deliciousness that you can certainly showcase, and certainly amplify, but that you don’t have to create. 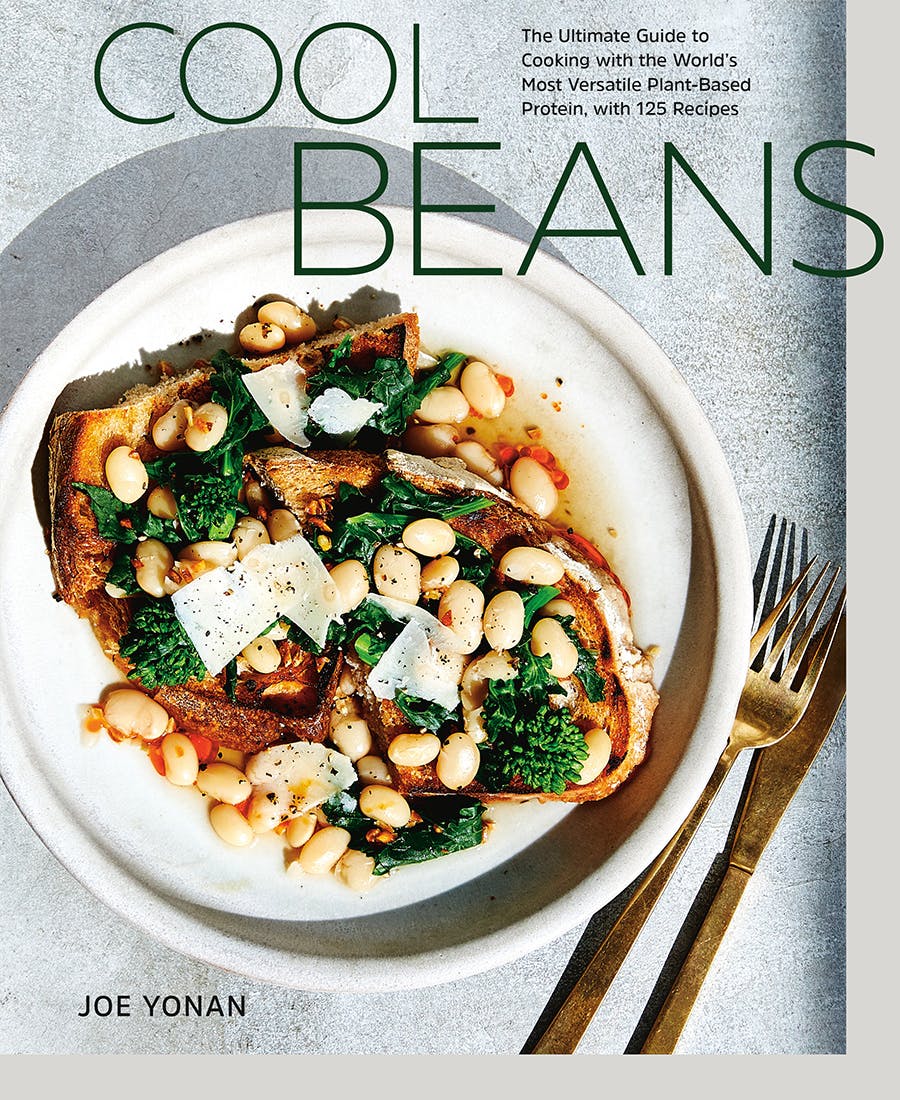 This is my updated version of my mother’s “Texas Salad,” which she made for special occasions when I was growing up in West Texas. The vinaigrette can be refrigerated in an airtight container for up to 1 week. To save time, feel free to use your favorite store-bought tortilla chips instead of frying your own. After they are fried, the tortillas can be stored in an airtight container at room temperature for up to 3 days.

This has the creaminess, tang, and saltiness of good feta, making it just the right finishing touch for so many bean dishes, including—of course—tacos. It gets better the longer it marinates. Note: Use firm, not extra-firm tofu, for the creamiest result.

Reprinted with permission from Cool Beans: The Ultimate Guide to Cooking with the World’s Most Versatile Plant-Based Protein, with 125 Recipes by Joe Yonan, copyright © 2020. Published by Ten Speed Press, an imprint of Penguin Random House. Photography: Aubrie Pick © 2020