Gone is most of the expensive handmade pottery. Absent are the whimsical murals by noted local graffiti and cartoon artist Peelander-Yellow. Missing are the self-consciousness and whiff of exclusivity that once pervaded the dining room, along with the costly tasting menus and torturous reservation protocols. All were hallmarks of Qui, quite possibly the most-anticipated restaurant ever to have opened in Austin. In their place are a new white sushi counter, a few modest decorative additions, and a newfound spirit of simplicity. The transformation from now-defunct Qui to its successor, Kuneho, is subtle but profound. The venue where the glitterati of Austin once flocked to rub shoulders with Top Chef and James Beard award winner Paul Qui is now a place where people go to simply enjoy a meal and where that same chef’s stated mission is to feed them well and make them smile.

Speaking of eating, that is exactly what was foremost in the hive mind of four friends and myself when we strolled into the month-old spot one recent weeknight, eager to see for ourselves what it had in store. Our first goal, though, was to see what the tiny cocktail bar had in store. A few sips of offerings like the Cloak of Feathers (two rums, five-spice seasoning, black tea kombucha, and so much more) indicated that the bar had survived the ups and downs intact. Revived, we headed to the dining area, settling down at one of the highly polished but rustic-looking wooden tables.

Kuneho’s menu is, as Qui’s was, pan-Asian, incorporating dishes from Japan, Thailand, and Malaysia, plus a few from the chef’s native Philippines. I perused the 25 or so dishes, made a few selections, then idly turned the card over only to find—what!?—more than 25 on the other side. That made about 50 dishes in eight categories, not all of them exactly clear (what, pray tell, is the difference between a Perfect Bite and a Snack?). But on the plus side, the prices were pretty good, and the mix-and-match possibilities seemed as endless as the ways to solve a Rubik’s Cube.

After some predictable dithering on our part (will two orders of tempura vegetables be enough?), we got down to business with the intriguing smoked sake. Several small slices of Ora King salmon had been intensively cold-smoked in-house, then drizzled with green tea–infused oil and carefully arranged on a creamy pool of whey (as one friend said, “It’s whoa—but a good whoa!”). Continuing the fish kick, we next tried the atun poke (pictured), a variation on Hawaii’s hardly new but insanely trendy raw fish salad: cool cubes of precisely cut tuna and avocado tossed with salty fish roe and sparkling with green apple and black sesame seeds. Our attempt at virtue, an end-of-season vegetable platter, was forgettable except for its svelte, miso-jazzed baba ganoush dip, but we hit the jackpot with the rabbit curry and roti. Showered with Parmesan, the huge, floppy Malaysian flatbread arrived delectably blistered from the griddle alongside a small bowl of heavenly braised rabbit and coconut milk red curry. I wasn’t surprised. Paul Qui has always had a way with rabbit; in fact, the name of the restaurant is the Tagalog word for “bunny.”

There were only two desserts on the menu that night, so of course we tried both. We liked the story behind the so-called foie rotiboy, a dessert inspired by a trip to Jakarta recently taken by chef de cuisine Mia Li (pictured at left, with Qui and head sushi chef Vu Le), but the doughy bun was the size of a sumo wrestler and managed to overwhelm its main accoutrement, a sweet coffee-and-foie icing. Much better was the darling, bouncy mochi cake, a work of art tricked out with an icy scoop of jasmine sorbet and dabs of orangey-pink sweet-potato semifreddo.

A few days later I went back to Kuneho alone to sample some Perfect Bites, a.k.a. mini-appetizers. Because it was about five o’clock on a Sunday afternoon, I had the entire sushi counter and three cooks all to myself. While they peeled garlic and stuck chicken parts on skewers, we yakked about Austin restaurants (struggling) and customers (fickle). We got to be such good buddies that they brought a piece of fresh, pristine white heart of palm for me to sample (it was milky sweet and soft-crisp, like a timid version of jicama). Of a half-dozen nibbles that day, my second-favorite bite was a dish that had in fact been a huge hit at Qui, the salmon butter; not a dairy product but a meltingly tender piece of the rosy fish atop a teeny toast with a dab of crème fraîche. My third fave was super-crunchy panko-breaded veal tongue fried to a golden crisp with a smear of karashi on top. I then took a detour to the menu’s Crudo section to try the kinilaw, or Filipino ceviche, silken and rich with a coconut-milk-and-vinegar marinade. But the Bites furnished the afternoon’s simplest and best morsel: a crisp little tostada made from an egg roll wrapper topped with perfect soft-scrambled eggs and glistening pearls of trout roe. 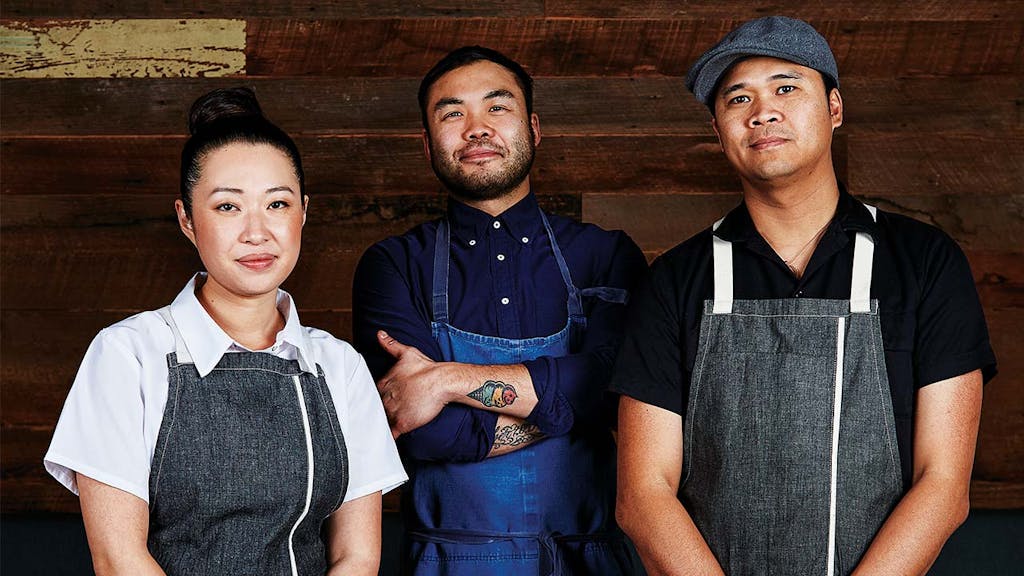 “Was it difficult,” I asked Paul Qui, when I called to talk a few days later, “closing Qui?” I hadn’t seen him since his unfortunately well-publicized stint in rehab this summer, and I had a sneaking suspicion that the failure of the demanding restaurant might have been the best thing that could have happened to him. He was in Miami Beach, looking in on a restaurant he’s in charge of there, and he sounded busy in a good way. “Sure, it was hard,” he said, “but now that I’ve had time to think, I’ve realized that what I missed most from when I began, at Uchi, more than ten years ago, was the simple satisfaction of handing a piece of sushi to someone and watching their face light up.” I knew what he meant, because I felt the same way. Qui the restaurant had been dazzling but also exhausting and expensive. After three visits, I never returned. With Kuneho, it’s an entirely different story. The place is fun, it’s easy, and it made my friends and me smile a lot. We’ll be back. There’s still plenty left to try, from both sides of that menu.