The best barbecue in Texas is currently being served at Snow’s BBQ, in Lexington, a small restaurant open only on Saturdays and only from eight in the morning until whenever the meat runs out, usually around noon. Snow’s is remarkable not only for the quality of its meat but for the unlikeliness of its story. No one on staff had heard of it until we received a reader tip following our 2003 barbecue issue. To stumble upon a place this good and this unknown is every pit hound’s dream, and so we feel compelled to offer, as evidence in favor of our judgment, our story of discovery. It begins with a staff writer’s asking her husband for a favor . . .

Katy Vine: With so much ground to cover, we are on occasion forced to deputize our spouses. This year my designated barbecue bailiwick in Central Texas was chock-full of well-known, top-quality pits. To save time, I sent my husband, George, to check out a few of the unknown places, after giving him the proper training, of course.

When George reached Snow’s, at around twelve-thirty, the only remaining meats were two ribs and an entire brisket. The owner made him a deal for all of it, then brought him out a few slices of brisket. George had never tasted barbecue this good. He returned home, placed the brisket on the counter, peeled back the foil, and told me to try some. What I tasted was as heavenly a piece of meat as I’d ever encountered. I immediately called our food editor, Patricia Sharpe, and told her we had found the best brisket in the state.

Patricia Sharpe: I was at a very loud party and having a great time, but Katy and George were so excited, I ran out the door and drove straight to their house. The brisket was sitting on their kitchen counter like a gold bar from Fort Knox. I put a bite in my mouth and closed my eyes. Good God almighty! Even six hours off the pit, it was perfect. Smoke permeated every morsel; the texture was pure velvet. On a scale of one to five, it was a seven—no, a ten!

The brisket was outlandishly good. But was it merely a happy accident? To find out, we sent veteran reporter S. C. Gwynne, whose appetite for good barbecue is surpassed only by his desire for the truth.

S. C. Gwynne: Anybody who knows barbecue knows that on a given day any idiot can get lucky. So I was dispatched to Snow’s to find out if this little pissant wood-frame building with four hours’ worth of business per week could reliably produce.

My wife and I arrived around ten, ordered everything on the menu, sat down, and tucked into a steaming mound of meat. Our verdict was not long in coming. The experience was otherworldly. The brisket was astonishingly tender, but it was actually topped by the pork steak. This was the best barbecue we had ever had. And the chicken, flavored with a mop sauce, was fall-apart delicious.

So who was the genius behind this fantastic meat? The answer added yet another layer of improbability. It turns out that the pitmaster is a petite, energetic 73-year-old woman named Tootsie Tomanetz who works during the week as a custodian in the Giddings school district. I visited with her while she tended her fires and meats, and it quickly became obvious that Snow’s was no mistake. Tootsie knows meat. She’s been smoking since 1967, when she ran the pits at City Meat Market, in Giddings. She and her husband, White, owned a combination meat market, butcher shop, and barbecue joint in Lexington for twenty years. When Snow’s opened five years ago, she helped owner Kerry Bexley design the pits. Every Saturday she arrives at three a.m. and builds the fires. She starts the meat smoking at four and wraps the brisket in butcher paper around six or seven. When I asked her why Snow’s wasn’t open more than one day a week, she said matter-of-factly: “There’s no market for it.”

The story only got better from there. Gwynne learned that Bexley’s initial motive in opening the restaurant was to give his teenage daughters a place to get work experience, something Bexley (whose childhood nickname was Snowman) takes seriously. Prior to his current job as a control room operator at a local power plant, he was a long-haul trucker, a field officer in the prison system, and for fifteen years, a rodeo clown. He also ran his own rodeo, the Rockin’ B Rodeo, for more than a decade. 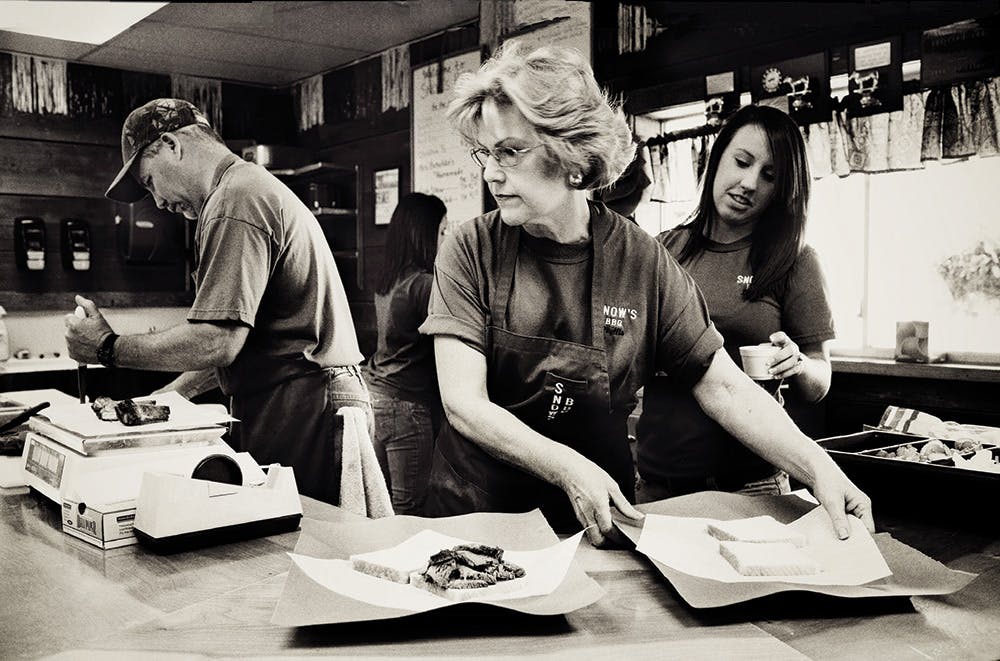 We were nearly ready to anoint Bexley’s joint as the best in the state. All that remained was to send the Double-Checker, Paul Burka.

Paul Burka: I timed my arrival for one p.m. to see if Snow’s could pass the late-crowd test, but when I got there, the restaurant was closed. Sold out! Empty! Locked! I turned around and headed for Taylor to double-check Louie Mueller’s. The next week I made it to Snow’s before noon, but even as I was contemplating my choices, I heard Bexley telling a customer that the brisket was already gone—too late again. “Texas Monthly has been here the last two weekends,” he added.

“I’m the third,” I said. I ordered pork ribs, chicken, and pork butt. The pork ribs were fantastic. The chicken was perfectly done. The pork butt was tender and yielding. By the time I had finished, Bexley and I were alone. He called me to the counter. “I didn’t want to say anything while other people were here,” he said, “but my daughter is coming in today and I’ve put up some brisket for her. Would you like some?”

Never have I felt such an outpouring of gratitude for my fellow man. He reached into his private stash and put a single slice upon my plate. I took a bite . . . our quest for the best barbecue in Texas was over.