The publication’s food blog, Grub Street, posted a slideshow on Friday of New York’s “nine most interesting Frito Pies,” marking the city’s latest food trend. Lauren Bloomberg explained that it all started in September, when Gabe Thompson, of the high-end Italian restaurant L’Artusi, served it at the San Genarro Festival, a street fair in Little Italy.

“It comes in a Fritos bag, which is snipped open so that chili con carne can be ladled inside,” Ligaya Mishan wrote in the New York Times when she sampled the dish. “You think it is a joke, and then your eyes go wide.”

Thompson spent part of his childhood in Texas—his official bio mentions memories of gardening with his grandfather here—and got his culinary training in Austin while working at Granite Cafe and Emilia’s.

He “used to grab a bag in the cafeteria snack line at school,” noted Bloomberg, who wrote that she’s enamored with the “walking taco.”

4 – Number of joints that, based on the photos or Bloomberg’s description, actually serve their Frito Pie in-bag, as the dish’s inventors intended.

3 – Too-fancy options. RUB (Righteous Urban Barbecue) nails it with the nacho cheese, but also adds . . . beans. Baked beans. Double Wide’s uses short-rib chili and aged white cheddar. And we’re not sure what kind of pepper tops The Beagle’s dish, but it’s neither green nor pickled.

2 – Ridiculous side dishes in the photo of The Levee’s Frito Pie: Dum-Dum lollipops and cheese balls. It is in Williamsburg.

1 – Frito pie that is delivery-only, from a place in the East Village called The Brindle Room. Perhaps this is the one idea we should steal. 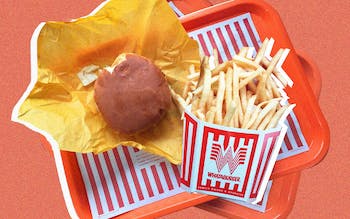 The Texanist: Why Isn’t Chicken-Fried Steak Our Official State Dish? 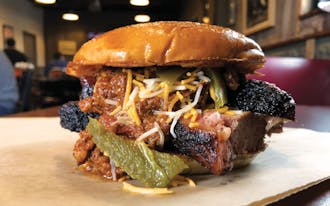