A road runs through Wylie that used to have a drag as good as any small town’s around. That’s the way I remember it. The last time I went home, I told an old friend I wanted a cheeseburger, so he took me past the old drag to a new burger joint next to the high school. It was the size of a warehouse and built of neon and stone. We sat at the bar, where people drank liquor from lava lamps that bubbled and glowed. A couple sucked on a rum drink out of two straws stuck in the type of plastic pail a child would take to the beach. I told my friend this didn’t feel like our hometown.

The restaurants on the drag I remember were more familiar. The barbecue place had a screened porch. The country cafe offered free ice cream. The Dairy Queen had closed down not long before a tornado took the building, but the Taco Delite still served a great drive-through dinner. Best of all, we had Sonny Boy’s Original Burgers.

Sonny Boy’s sat on the drag across from the supermarket and the First Baptist Church. My parents would pull into the gravel lot, and we’d stop at the picnic tables out front to catch up with friends. At the counter my dad would order me a cheeseburger too big to finish and fries so greasy I could shape them into letters on the Formica tabletops. The walls were covered with newspaper clippings and high school football jerseys and letter jackets. For a kid who couldn’t imagine a life beyond Wylie, a dinner at Sonny Boy’s was almost too much to handle. 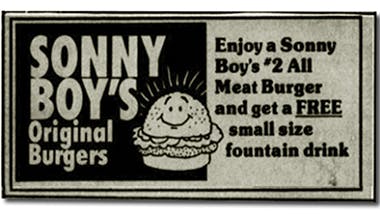 I sat down to write about these memories, ready to name Sonny Boy’s the Best Hamburger Joint in Texas. I called around first to be sure. My dad asked if it had served barbecue. My mom mainly talked about the jukebox. My sister recalled the black-and-white-checkered floor. My old barber preferred another restaurant for hamburgers. The highest praise came from a woman who runs the funeral home. She said Sonny Boy’s was a place to drop in anytime for a great hamburger. She also told me the picnic tables out front never existed.

The closest thing I found to the truth was that Sonny Boy’s opened in 1984, next to a little grocery store. It took over the rest of the building two and half years later. In the spring of 1992, a grease fire spread so fast that by the time the fire trucks showed up, the entire building, including all the old Wylie memorabilia, had burned. Sonny Boy’s lasted all of seven years. The owner passed away earlier this year and was buried in the cemetery in the oldest part of town.

Everything looks different in Wylie these days. The city limits have blurred as the suburbs have boomed, and I can’t tell where my hometown begins or ends. The two-lane drag from my childhood has expanded to six lanes with a dozen fast-food franchises. But across the street from the old supermarket is the gravel lot and the concrete slab where Sonny Boy’s used to stand. I saw it the last time I went home, and I thought of a good cheeseburger. At least that’s how I like to remember it.