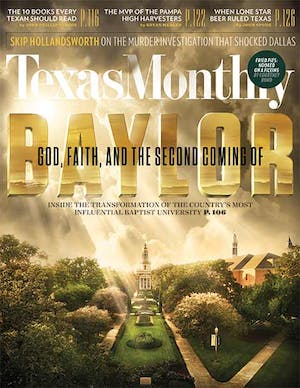 I was attempting to navigate the bar crowd near the front door—feeling like a disoriented tuna swimming through a school of cocktail-crazed sharks—when the irony hit me and I almost burst out laughing: Pax Americana, the restaurant’s name, is Latin for, on a strictly literal level, “American peace.” Peace!!! Really?!! Maybe I was addled from the jostling, but the contradiction struck me as hilarious. I mean, “peaceful” is the last word anybody would use to describe this jam-packed new restaurant that opened near Houston’s Museum District in August. With its 160 seats pretty much occupied every night, energy fills the air like an electrical hum. Even when star co-chef Plinio Sandalio left abruptly after less than two months, it didn’t seem to diminish the crowds or the thunderous noise level one bit. But I’ve given up being affronted by loud restaurants. It’s as pointless as griping about the smell of an oil refinery. The people who work there just roll their eyes at you and say, “That’s the smell of money, little lady.”

But I digress. What’s surprising is that Pax doesn’t look noisy. It’s classy, bordering on posh, with tall vases of fresh flowers, banquettes upholstered in tufted brown leather, and details like cove molding and creamy white woodwork. The tables are even set with classic buttonhole napkins. The place is almost formal, which is a welcome change of pace in today’s relentlessly casual world. I was so astounded to see a new restaurant with something on the walls besides paint-spattered barn wood that I wanted to kiss the designers.

However it looks and sounds, though, Pax Americana is a decided hit amid a spate of notable new Houston restaurants—Bistro Menil, BCN, Holley’s, Lillo & Ella, Museum Park Cafe, Ruggles Black. The main man behind the buzz is 31-year-old chef Adam Dorris, who caught the Houston restaurant world’s attention a few years ago at now-closed Stella Sola and again last year during a series of dinners at Revival Market. His menu here, as with so many these days, fits into the grab bag of New American cuisine. And, like so many, it has jettisoned the usual categories and plate sizes. It has five sections: Shareables, Vegetable, Sea, Land, and Sugar, but honestly, they all lend themselves to sharing. By far the best approach is to order at random and dig in.

One of my favorite smaller choices was quite brunchy, a cast-iron skillet of soft-cooked eggs jazzed up with kimchi aioli and sesame vinaigrette. Alongside were slices of purple barley bread from Common Bond, a bakery on lower Westheimer that has become quite the hit itself. A diminutive mountain of dewy lettuces, mint, and basil sat on top of the eggs, plus scallions, rounds of sneaky-hot serrano, and a sliver of scarlet watermelon radish. We spread bites on the bread and then finally just scooped it up by the dripping spoonful.

One of the nice things about a menu of mostly small to medium plates is that you can turn on a dime, so we next jumped over to the beef tartare. Instead of the standard plain raw meat, though, the gooseneck (or bottom round) had been brined and cold-smoked, giving it a sharp edge accentuated by chopped pickles. To soften the effect, the tartare had been daintily polka-dotted with dabs of cultured cream and Italy’s classic tangy tonnato sauce.

After that, we were ready to take a little break from meat, so we ordered the luscious house-made goat ricotta (pictured), a cheese that is as rich as burrata but with a subtle pungency. Served with a grilled loaf of sunflower-seed rye, the cheese was crowned with another heap of greens and sprouts—these frilly garnishes are a signature of Dorris’s—and around the edge of the plate were dollops of jamlike preserved fig. The combination was simple, but every element sang.

On the second night I was there, our table must have been in a Texas mood, because somehow we ended up with the bone marrow plate and the bowl of brisket. All I can say is, don’t plan to get your cholesterol checked the next morning, because you really do want to have both of them. When we spooned the marrow from the bones, it was almost fluffy, as if it had been whipped, and very fresh-tasting. Radish slices cut the fat, as did another impromptu salad, this one of fresh herbs in a vinaigrette flavored with braised bacon and pink peppercorns. But we barely paused before tackling the next course, chunks of meltingly tender fatty brisket with a serious outer bark. Even though it was rubbed with Asian spices (including ginger and star anise), its depth of flavor matched that of the best Central Texas barbecue.

After this meaty run, we switched gears to a lighter, oceangoing mode and ordered the shrimp sided by porchetta di testa. And we were amply rewarded with linebacker-size denizens of the Gulf, cooked to just-done crispness, sitting on top of a fat slice of pig’s-head terrine. The whole thing was lavished with a Hatch chile romesco whose grassy, bright-green flavor was perfect with the chunky pork.

Although “nose to tail” long ago entered the foodie vocabulary, there are still a few exotic ingredients in the whole-animal movement, and one of them played a supporting role in our favorite dessert of the evening, the sanguinaccio fritters. Yes, students of Latin and Italian, the root of that word is “blood,” fresh pig’s blood, in this case. But the tidy little balls of chocolate ganache—crisp-fried in batter and dredged in sugar—just tasted like chocolate, and if our server hadn’t explained, I doubt we would have suspected. Besides, there was a lot going on with this contrasty, yin-yang dessert: a quenelle of almond-rich horchata ice cream, a puckery smear of lemon curd, a scattering of candied pecans.

By the end of two evenings, we had tried the majority of the sixteen-item menu. But Dorris says he intends to rotate it frequently—if he can avoid the wrath of diners who settle on favorites and demand the same thing every visit. That means there will be just that much more to explore the next time I feel up to swimming with sharks.