“Pozole is a Christmas Eve favorite in Mexico, and on the New Mexico side of Texas pozole holds the position that chili holds in Texas.”—Linda West Eckhardt, The Only Texas Cookbook

Round about this time of year, the visions dancing in my head tend to involve big ol’ pots bubbling away on the stove, giving off aromas that evoke warm, fuzzy feelings of comfort and celebration. To that end I turn to pozole, a treasured Mexican dish at the heart of many a Texan’s holiday festivities. Restaurateur Josefina Howard once wrote of hearing the earthy stew referred to as “one of the great dishes of international gastronomy, comparable to cassoulet [and] bouillabaisse,” and it is genius, the way the tender pork and toothsome corn contrast with crunchy slices of lettuce and radish and bright hits of fresh lime and Mexican oregano.

Regional variations are numerous; what follows is a traditional pozole rojo (so named for the hue imparted by smoky ancho chiles) from Rick Bayless’s Mexico: One Plate at a Time. It’s not as formidable as it looks (assuming you do not choose to nixtamalize your own corn and dehead every kernel, which allows it to “blossom” all pretty-like in the broth). And don’t shy away from the pig parts; these cuts lend a velvety richness to the broth that you can’t get otherwise. Unless you go the truly authentic route and use a pig’s head; in that case, see Kennedy, Diana (“Set the eye aside for the honored guest”).

2 pounds fresh or frozen nixtamal corn, well rinsed (the stuff they make masa from; available at Mexican markets and tortilla factories); if you go with dried, use 1 1/2 pounds Southwestern-style dried pozole corn (ranchogordo.com is a good source)
1 head garlic, cloves broken apart, peeled, and halved
3 1/2 pounds pork shanks, cut into 1-inch-thick pieces (ask your butcher to do this for you)
1 1/2 pounds fresh pork trotters (yep, pigs’ feet), cut in half lengthwise (ask your butcher, with whom you are becoming close friends)
1 1/2 pounds bone-in pork shoulder (also called butt—go figure), cut into 3 or 4 large pieces (by, you guessed it, your butcher, whom by now you have invited to your pozole dinner because it’s just the right thing to do)
Salt
1 large white onion, finely chopped
8 medium (4 ounces total) dried ancho chiles, stemmed and seeded (can substitute guajillo or árbol chiles)

Measure 6 quarts of water into a large (10-quart or so) pot and add the corn and garlic. Bring to a boil, partially cover, and simmer over medium-low heat until corn is thoroughly tender (a minimum of 2 to 3 hours for nixtamal corn and 5 hours for dried). Add hot water as necessary to keep the water level more or less constant (just keep a little pot of water simmering on another burner).

While the corn is simmering, place all the meats in another large pot, cover with 4 quarts of water, add 2 tablespoons salt, and bring to a boil. Skim off the grayish foam that rises during the next few minutes, then add the chopped onion. Partially cover the pot and simmer over medium-low heat until all the meat is tender, about 2 hours. Remove the meat from the broth and let cool. Or, if time allows, cool the meat in the broth for the best flavor and texture.

Skim the fat from the broth (you should have 2 generous quarts of broth). Pull off the meat from the pork shanks and pull the shoulder meat into large shreds. Cut the bones and knuckles out of the trotters and discard, then chop what remains into 1/2-inch pieces. Add to the shredded meat (there will be about 6 cups of meat in all). Cover and refrigerate if not serving within an hour.

While the corn and meat are cooking, rehydrate the chiles in enough hot water to cover (lay a small plate on top to keep them submerged) for about 20 minutes. Purée the chiles with their liquid in a blender.

When the corn is tender, press the chile mixture through a medium-mesh strainer directly into the simmering liquid. Add the pork broth and 1 tablespoon salt, partially cover, and simmer for 1 hour.

Add the meat to the simmering pozole and check the consistency: it should look hearty—chock-full of corn and meat—but brothy. If necessary, add water. Also add salt (probably more than you’d expect) to taste.

Adapted from Mexico: One Plate at a Time, by Rick Bayless, published by Scribner. © 2000 Rick Bayless. 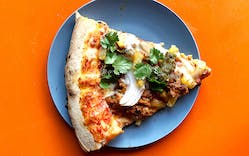