The Coronavirus Pandemic
Read our Coverage
Priya Krishna, the author of Indian-ish: Recipes and Antics From a Modern American Family and a contributor to the New York Times and Bon Appétit, is keeping a food diary for Texas Monthly while she's quarantined with her parents in Dallas.

Two weeks ago, I was interviewing someone over the phone for an article about changing grocery habits. I asked this person about the one ingredient he was stocking up on now that he has to cook far more regularly, and his answer took me by surprise: herbs.

Most everyone else I interviewed had responded with some combination of rice, beans, or flour. So I was surprised to hear an answer that not only wasn’t a pantry staple but was really considered more of an adornment than a central player. I was curious to know more. I asked him to elaborate, and he explained that while he does rely on staples like rice and beans, herbs are how he injects variety into his routine. Herbs mean his pot of beans doesn’t taste the same night after night. Herbs allow him to make endless sauces and salsas that he can toss onto any vegetable or grain. Herbs were keeping his cooking routine dynamic.

Since that interview, I’ve been thinking about my own relationship with herbs. At home in New York, herbs tend to stress me out. I always have some cilantro on hand for garnishing my dals and sabzis. But in general, herbs have always felt like a ticking time bomb: if you don’t use them up quickly enough, they turn into sad, green mush. While staying with my parents in Dallas, though, I’ve learned that they are more like that interviewee. We have no fewer than three kinds of herbs on hand at any given moment. At first, I was sidestepping those herbs, but since that interview, I have decided to lean into them to see how they could jazz up my meal routine.

To start, I made arugula pesto with olive oil, lemon zest, parmesan, and walnuts, and threw in a fistful of basil that was about to go bad. We ate it over rotini, and then I spread the leftovers over toast the next morning. On a scorching afternoon, I made chaas, a loose yogurt drink similar to lassi, by combining yogurt, ice, water, cumin, salt, and plenty of mint leaves. Wildly refreshing.

Last night, I went Vietnamese for dinner, broiling lemongrass tofu that was served with rice noodles, cucumbers, crushed peanuts, and mint. The mint was the most critical part—it brightened up every other element in the dish. And I can’t even count the number of times I have combined cilantro, lime juice, sugar, a green chile, and salt in a blender and made cilantro chutney to toss into rice, or spread onto a sandwich, or eat with a samosa, or drizzle onto nachos. Also, to those who fret about herbs going bad, you can chop them, put them in a sealed bag, and stick them in the freezer. Better yet, make a chutney or a pesto and freeze that for when you want dinner in a hurry.

Herbs have lent my food a technicolor touch at a time when the days can feel so monotonous. They’re the verdant, flavorful pops that I need to get excited about a dish when I am cooking three meals a day. No one needs to tell me to stock up on rice and beans—I get it. But I was happy to have the reminder that not all the ingredients we’re buying right now need to be filling and nourishing. Some of them can simply be there to add a little liveliness, and that’s just as important. 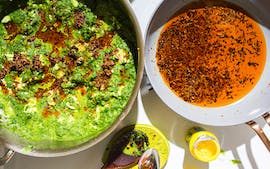 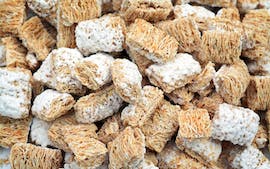 Priya Krishna’s Quarantine Journal, Entry No. 6: Morning Is No Time for Fancy Foods 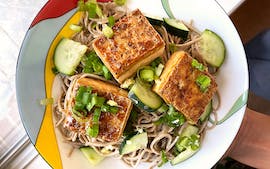 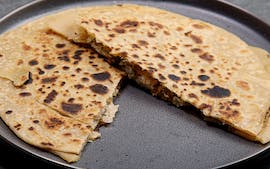