Last week marked one year since the release of my cookbook, Indian-ish. Amid everything going on, I almost forgot, until my sister texted me a photo from our book launch dinner in New York. (Remember when we could all go to book launches … and parties in general?)

A lot of things have happened since my cookbook release that I never could have predicted. Top on the list? That the least photogenic dish in the entire book would become its most popular. I’m talking about saag feta, the result of my mom’s ingenious idea to replace the paneer in a traditional saag paneer with tangy, briny feta. Pair that with a bright, vibrant saag gravy and a drizzle of ghee-soaked spices on top, and it’s a winner. My cookbook photographer, Mackenzie Smith Kelley, and I had agreed while looking at the finished book that while it was definitely a brilliant dish, it was one of our less inspired photos. And yet, when Indian-ish came out, I was getting tagged in dozens of saag feta shots each day. Even now, my tagged photos on Instagram look like a giant grid of bright green.

I made saag feta so many times in 2019—at book events, at cooking demos, at classes, for videos. I thought I loved it so much I could never get tired of it, but even the best dishes start to wear on you if you make and eat them too often. At one point, I remember calling my mother and telling her that I was going to need to take a year off from saag feta after the book tour. For the most part, I stayed true to that.

So last night, to mark the first anniversary of the book, we decided that it was time to bring saag feta back into our lives. I can do the steps to the recipe in my sleep at this point. Heat the ghee. Toast the cardamom and coriander. Sweat the onion. Stir in garlic and ginger. Barely wilt the spinach. Mince the chiles and drizzle the lime juice. Season with salt, but not too much. Blend the spinach. Stir in some water. Fold in the feta. Temper the cumin seeds in ghee, and pinch in some asafetida and chile powder. Pour the spices over the saag. Devour with a healthy amount of rice, and maybe a few rounds of roti.

Saag feta is one of those dishes for which I always seem to have the ingredients on hand—it’s that straightforward. It’s a fridge clean-out meal at its finest. Except that last night, we were missing the most important ingredient—the feta. But we did, ironically, have a block of paneer in the freezer. So we fished it out, defrosted it, and cut it into cubes. After a year of telling people that once they try saag feta, they’ll never go back to regular ol’ saag paneer, I returned to the O.G.

And you know what? It was delicious. I mean, of course it was delicious. It was cheese and spinach and spices and ghee. And it felt appropriate to this particular moment in time, as saag feta is a dish that was made for substitutions, from the ghee (use oil!) to the greens (try kale!) to, of course, the cheese. I have a feeling saag halloumi—made with the mild sheep- and goat-milk cheese that originated in Cyprus—is about to become a thing in my life. 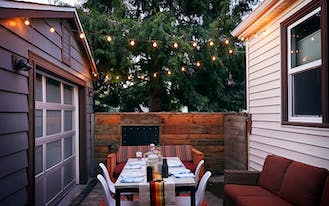