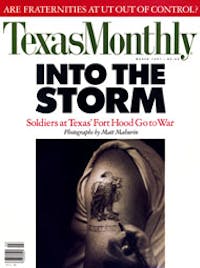 With more than fifty local companies whipping up everything from zesty salsas and exotic chutneys to stuffed pizzas, Austin has become a mecca for fresh, homemade foods. Still small enough to seem like one big happy neighborhood, Austin is the kind of place where sharing your favorite recipe is the thing to do. That’s why cottage industries, like SASS sauce and ¡Sabor! Salsa, are home-recipe success stories—personal concoctions so seductive that they have been bottled and marketed practically by popular demand.

Although these small companies had to improvise some of their equipment—and none of them had a professionally outfitted stainless-steel kitchen when they started—what they did have was a product that tasted good and was good for you. Austin-made foods are available at chain grocery stores and many smaller specialty-food stores throughout the state—they are carefully prepared, wonderfully lively, and so delicious that you’ll never feel as if you’ve bitten off more than you can chew.

Something about Sisters’ SASS (Season All Stuff Sauce) inspires fan mail. The sisters, twins Carol and Lauri Raymond, keep a scrapbook of letters from people who have received SASS as a gift or—like “Desperate” in Alameda, California—bought it as they blew through town, only to return home to grocery stores that had no SASS. Someone in Houston inquires, “Do you sell it by the case?” A “tragically addicted” New York fan ha even offered to find an East Coast distributor.

The objects of those insatiable yearnings are two sassy sauces that Carol and Lauri served in their own homes long before friends urged them to go public. Chicken, beef, fish, tofu, and vegetables all get a major rumble from these seismic sauces—the original gracefully spice sesame-garlic and its sequel, tomato-basil. And just about anything else passes into a heightened state of edibility with a little SASS: mayonnaise, yogurt, cream cheese, sour cream, pastas, baked potatoes, soups, and casseroles.

Carol and Lauri, who began their enterprise in 1988 with $165, seem slightly surprised by their success: SASS is now the top-selling dressing at the Dallas and Houston Whole Food Markets. Even so, they have intentionally kept their company from rocketing out of control. The sisters are content to emphasize quality over quantity; after two years, they sell only about 2,400 bottles a week to a local distributor. But until Sisters can find a transportation system quick enough to whisk its fresh and perishable product out of state, fans will just have to keep those cards and letters coming.

The Elvis of Pizzas

Jeff Sayers is a man with a mission. As the owner of Mangia Pizza, a small Austin restaurant, he preaches the gospel of stuffed pizza to an audience raised on big-chain pizzas with tuneful phone numbers and stopwatch delivery times. Sayers was an inspector for the Occupational Safety and Health Administration who had only a junk-food relationship with pizza until a visit to Chicago in 1976, when a friend took him to the city’s best pizza houses. In 1984 Sayers decided to leave job security and regular work hours behind to study the pizza business in Chicago. Four years later, he opened his own restaurant in Austin, where his wife, Michelle Cross, had received her degree in dietetics.

To attract disciples outside the restaurant, Sayers and Cross package a spinach-mozzarella rendition of Mangia’s plump, ten-inch-wide, two-inch-deep pies (the Elvis of pizza, Sayers says, and indeed, the proportions are quite kingly) and distribute it to Texas grocery stores. The handmade three-layer pie is built and baked in the restaurant’s kitchen on afternoons, its spinach-and-cheese filling chopped and whipped up in a Cuisinart-on-steroids affair that doubles as a dough mixer.

Although pizza has been much-maligned as a junk food, Sayers and Cross have taken the fat out of that complaint. The crust may be pastry-flaky and the tomato sauce may taste opulent, but Mangia pizza is heart-healthy: Sayers and Cross submitted the recipe to the Chicago Heart Association for approval. The first attempt didn’t make the grade, but Cross tinkered with it, substituting skim mozzarella for whole-milk cheese. With just sixteen grams of fat per serving, the pizza passed the test. And one look at the list of ingredients on the box reveals that, with the four basic food groups strongly represented, Mangia Pizza is a paragon of good taste.

TexaFrance’s Jean-Pierre Parant and David Griswold couldn’t be more dissimilar if they tried. The dapper Parant, a Quebec native, bears the slightly distracted look of a businessman with a lot on his mind. Griswold, a robust Texan usually garbed in sweatpants and sweatshirt, handles the production end, which means he can usually be found peeling green onions over the garbage can or stirring redolent sauces over a hot stove.

TexaFrance specializes in gourmet pasta sauces, pestos, mustards, salad dressings, chutneys, jellies, and butters. The company was formed in 1985, after a stroll down a grocery store aisle brought Parant face-to-face with a marinara sauce ticketed at a surprising $5.99—he knew he could do one better and cheaper. So Parant teamed up with Griswold, who had worked with him in the restaurant business, to start TexaFrance. Their first sauce, a duskily spice marinara, retailed for $1.99 at Tom Thumb and Whole Foods. TexaFrance has flourished. In its first two years, sales ballooned 40 percent; each of the last two years has seen a 20 percent growth rate, and TexaFrance products can now be found in fifteen states. Its mild basil pesto leads the pack in sales. Predictably, the sun-dried-tomato pesto and the nutty, personality-packed poblano-pepper pesto are best-sellers on the East and West coasts.

It’s not enough that Parant and Griswold produce a luxuriously rich cilantro pesto or a snappy peach chutney. They have spotted other food-related opportunities that many would overlook. Two nooks in their small space in a generic office park are rented out to a few local chef-entrepreneurs, like Satay restaurant, which turns out a miraculous, flavorful peanut sauce that should be served with every food group known to man. Catering is another sideline, and TexaFrance also creates products for other labels. For Lana’s, an Austin company that makes a classy egg roll, Griswold simmers up a vegetable-flecked sweet-and-sour sauce. Griswold lines up ten jars and makes a first pass over them with a pitcher brimming with Lana’s sauce, filling each jar halfway with the hot liquid. A second steady-handed flyover fills the jars so that all of the vegetables are symmetrically suspended. Trial and error have shown that it takes a double pass to keep the vegetables from floating to the top. An agitating machine could do this, but such an investment is still in the future.

Having been in the health-food business for more than twenty years, Reed Murray champions yogurt and tofu with a passion. His two labels, White Mountain and Purist Foods, take what some might think is the hard line on vegetarianism, specializing in food free of meat and preservatives.

Creamy European-style White Mountain yogurt, with its tangy kick, is Murray’s pet. He rankles at the notion that there is any similarity between his fermented acidophilus-type product and the popular ice cream-type clones. Murray argues that those pasteurized products have none of the beneficial bacteria like acidophilus that reside in his real yogurt—and bacteria is what gives yogurt its status as an anti-carcinogenic food that is good for what ails you.

As anyone who has tried to exist in Texas without eating tamales known—you can’t. So Murray’s Purist Foods has developed a disarmingly exact substitute from what gluten—all you’ll miss is the grease in the tidy little morsels that look, cook, taste, feel, and smell like the real thing. Besides, being low-fat, they conform with the American Heart Association’s guidelines.

With more than twelve salsa companies at last count, Austin can justly brag about being the hot-sauce capital of the world. ¡Sabor! started in 1981 as the top pepper and still has other salsamakers eating their hearts out. The company’s founder, Fernando Miramón, a native of Mexico City, had come to the States to ply his trade as a jazz and Latin pianist. After spending years on the road, he was ready to do his own cooking, and by 1979, when he and his wife, Kathleen, settled in Austin, he had created a salsa in the kitchen that was as hot as the salsa he played on the piano. When friends began offering cash for batches of the stuff, Miramón decided to bottle it.

¡Sabor! was startling because it was so fresh—Miramón picks his own serranos (grown within feet of his minuscule kitchen) in the morning, mixes and bottles the sauce in the afternoon, and then immediately delivers it to grocery-store refrigerator cases. He prefers the tiny, hot serrano to jalapeño, which, he says, is “too moody.” He also opts for olive oil instead of vinegar and green onion instead of white for a suaver overall effect. And, of course, there’s the cilantro, which catalyzes both Miramón’s red salsa and his dramatic Rabo Verde green sauce.