How Priya Krishna’s New Cookbook Celebrates Her Dallas Childhood (Plus: Her Recipe for ‘Indian Gatorade’)

Recipe: Pecan Snickerdoodles from “Cooking with Pecans: Texas in a Nutshell”

Our Texas Cookbooks series looks at new recipes as well as old favorites from around the state.

Mary Faulk Koock’s classic The Texas Cookbook was published in 1965 as the definitive resource on Texan cuisine. Koock is best known as the force behind Green Pastures, her family home in Austin that she turned into a grand restaurant where governors, oil tycoons, and other high-society big shots wined and dined. (Green Pastures still houses a restaurant, now called Mattie’s, after Koock’s mother.)

Famously written with the guidance of the one and only James Beard, Koock’s sprawling cookbook divides Texas by geographic region, starting with Austin and spiraling outward from there. It includes an almost overwhelming number of recipes, and the reader must wade through Koock’s anecdotes to understand the context of each. There’s a helpful index for those just seeking dinner ideas, but if you’re willing to accompany Koock on her travels, she offers a glimpse of a Texas far different than today’s.

To a modern eye, The Texas Cookbook reads a bit like a Junior League cookbook on steroids, a peek into the great dining rooms of Texas during the LBJ presidency. One chapter, in fact, focuses on the LBJ ranch, with multiple recipes from Lady Bird Johnson herself. Koock offers the menu from the first Eeyore’s Birthday Party in Austin—including a recipe for beans that serves 100. She visits the famous King Ranch and the Luling Watermelon Thump—and serves chilaquiles from Brownsville and smoked venison in the Hill Country.

In many ways The Texas Cookbook was ahead of its time, offering a more diverse sampling of Texan cuisine than its contemporaries. Koock was dedicated to searching out food beyond the state’s famed barbecue and Tex-Mex. She hunted down little-known small-town traditions. She sought out immigrants to contribute recipes (albeit mostly Europeans). She displays a dedication to research in the vein of famed authors like Julia Child and Diana Kennedy.

That said, the book can’t escape having been written in 1965. The vast majority of the recipes are sourced from the wealthy and white. It stems from a time when it was possible to become a town’s “most accomplished hostess” by having the maid make dinner. Expect many menus for grand banquets and wedding luncheons. There are also the requisite midcentury recipes that consist of tossing canned foods together and baking them, and the “Mexican” dishes are about fifty percent recognizable and half (speaking charitably) misunderstandings.

Still, there is much to learn here, about cooking and the role it played in Texan life in the 1960s. In selecting a recipe to share, I asked myself what cooks from this era did best, and came up with two answers: baked goods and casseroles. Here, we go with the latter, a hominy casserole that is essentially macaroni and cheese with hominy instead of macaroni. This is a great dish to bring to potlucks or to serve for dinner with a simple salad.

I’ve taken the liberty of translating Koock’s summary-style recipe for the dish into a standard 2019 recipe format. I hope she’d forgive me. Both are included below.

Melt butter in a saucepan over medium heat. While the butter is melting, add the breadcrumbs to a small bowl. Pour half the butter (¼ cup) over the breadcrumbs, and stir to combine. Whisk the flour into the remaining butter, and cook, whisking, for about 2 minutes.

Whisk in the milk, slowly at first. Bring to a simmer, and simmer for 5 minutes, until very slightly thickened. Season with paprika, salt, and pepper. Let cool, and whisk in the eggs.

Grease a 13-by-9 inch baking pan. Add a layer of hominy, a layer of sauce, and a layer of cheese; repeat three times, and top with the buttered breadcrumbs. The casserole will be very soupy, but it will thicken quite a bit in the oven.

Bake for 45 minutes, or until the sauce is bubbling and the casserole is set. You may brown the breadcrumbs slightly under the broiler, if you like. Let the casserole cool 5-10 minutes and serve, with hot sauce on the side.

*Cans of hominy may be labeled as 29 ounces or 28.5 ounces, depending on the brand. If there are two sizes of cans at the store, go with the big one.

How Priya Krishna’s New Cookbook Celebrates Her Dallas Childhood (Plus: Her Recipe for ‘Indian Gatorade’)

Recipe: Pecan Snickerdoodles from “Cooking with Pecans: Texas in a Nutshell” 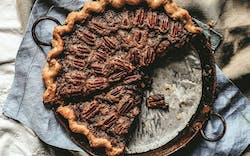 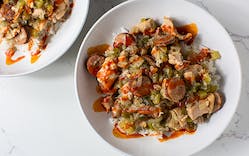 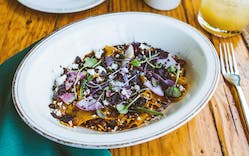