Our Texas Cookbooks series looks at new recipes as well as old favorites from around the state.

How does a white guy who lives in Atlanta end up writing a Tex-Mex cookbook? Ask chef and restaurateur Ford Fry.

Raised in Houston, Fry credits the now-shuttered landmark Felix Mexican Restaurant with igniting his love for fajitas and queso. In fact, he takes a stab at recreating Felix’s famous (and famously unique) queso in his new book, Tex-Mex: Traditions, Innovations, and Comfort Foods from Both Sides of the Border, written with Texas Monthly contributor Jessica Dupuy. “A word of warning,” he writes. “If you didn’t grow up on this dish, you might say, ‘Ford??!?!? What are you thinking?!’ Just trust me.”

Aside from the Felix queso, most of the recipes in Tex-Mex come from Fry’s restaurant Superica, which has four locations across the South, including one in Houston. You’ll find all the classics, from migas to rice and beans to enchiladas suizas to chicken fajitas. It’s a good overview of an oft-misunderstood cuisine. Much of the contextual information will be familiar to Texans, but it serves well as an introduction to those who confuse true Tex-Mex with the fare offered by a certain fast food chain that sells tacos in shells made out of Doritos.

I’d also recommend this book to homesick Texpats. Fry provides recipes for old fashioned Texas comfort food, including a San Antonio-inspired breakfast taco salsa, drive thru-style chicken al carbón, and a dang good flour tortilla. Those who live more than a thousand miles from the closest breakfast taco truck will soon be happily clutching a chorizo-egg-and-cheese, thanks to these recipes. 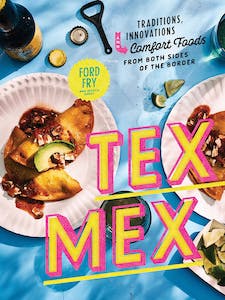 Despite all of this throwback cooking, the book feels anything but dated: Johnny Autry’s high-contrast photographs literally cast Tex-Mex food in a light I’ve never seen it in before. There’s a freshness to the art in Tex-Mex that belies the stagnancy associated with traditional cookbooks. Similarly, Ford occasionally veers from the standard issue Tex-Mex path, lacing a rice pudding with horchata and shaking up a paloma with hibiscus-infused tequila. Tex-Mex sticklers won’t be too upset, though: Most of the recipes toe the old-school line, including several applications of your grandma’s favorite secret ingredient, chicken bouillon.

In other words, Fry, despite his Georgia zip code, knows what he’s talking about. His Tex-Mex leans towards a Houston-style—the grilled Gulf oysters divorciados are particularly appealing—but the recipes in Tex-Mex will be familiar to devotees of the cuisine across the state.

If there’s one thing Fry’s adopted home of Atlanta has in common with his hometown, it’s oppressive summer heat. Below, a trio of mostly-fruit paletas from Tex-Mex—enough to tide you over until it’s chili con carne season once again.

In a blender, combine the avocados, coconut cream, lime zest, lime juice, salt, and ½ cup water. Purée until smooth, about one minute. Pour into ice pop molds, and freeze until solid, at least six hours. The paletas will keep in the freezer for three to four weeks.

In a blender, combine the strawberries, sugar, and lemon juice. Purée until smooth, about one minute. Transfer the mixture to a medium bowl, add the condensed milk, and stir briefly, just until the milk is swirled through the strawberry mixture—do not completely combine. Pour the mixture into ice pop molds and freeze until solid, at least six hours. The paletas will keep in the freezer for three to four weeks.

In a small saucepan set over high heat, combine ¼ cup water and the sugar. Cook, stirring frequently, until the sugar has dissolved, three to four minutes. Remove the pan from the heat, and let it cool until the syrup is no longer steaming, 10 to 15 minutes.

In a blender, combine the cooled syrup and the pineapple and purée until almost smooth, leaving some small pieces of pineapple intact. Pour the purée into ice pop molds and evenly sprinkle with Tajín. Freeze until solid, at least six hours. The paletas will keep in the freezer for three to four weeks.

TIP: Tajín is a Mexican seasoning primarily known for its chile and lime flavor. It can be found at specialty Latin markets and online.

Recipes reprinted with permission from Tex-Mex Cookbook: Traditions, Innovations, and Comfort Foods from Both Sides of the Border, by Ford Fry, copyright © 2019. Photographs by Johnny Autry. Published by Clarkson Potter, a division of Penguin Random House Inc.

Everything You Need to Know About Hosting a Crawfish Boil