An accompanying cookbook was planned from the outset: “The content [in The Jemima Code] was complicated and new for so many people, it was important not to weigh it down” with recipes, says Tipton-Martin, who now lives in Baltimore. She thinks of the two books as a set. The Jemima Code sets the context for Jubilee’s recipes, and Jubilee “tees up Jemima Code” for those who are drawn first to the recipes.

Broadly speaking, though, this a cookbook that’s been in the works for centuries. Jubilee references two hundred years of cookbooks, looking at the rich variety among African American dishes as well as the contributions of these authors to American cuisine writ large. The specific recipes “were all chosen intentionally for the story they could tell,” says Tipton-Martin. In her research, she encountered an untitled cookbook proposal by Harlem Renaissance-era historian Arturo Alfonso Schomburg that included an outline of over four hundred dishes. There, she writes, “I saw the framework of a distinct African American canon.”

Following that framework, she set out selecting recipes for Jubilee, taking note of recipes that appear again and again (including in modern cookbooks). She kept an eye on the diversity of dishes: “I didn’t just have all diaspora recipes or all migration dissonance, but a really good mix of them all.” Once a dish was selected, Tipton-Martin “created a template to compare three or four or five recipes across decades,” looking for similarities. She then tested the composite recipe and adapted it to modern kitchens.

When asked about Texan contributions to African American cooking, she mentions barbecue, then adds, “For the longest time, we have tended to associate African American Texans with East Texas and the expansion of the Southern soul food movement.” But her cookbooks told a different story, using southwestern flavors. “Texans, as is true for most everything else, express an individuality. In the case of African Americans, what that means is it’s integrating or fusing the flavors of the Southwest.”

Look for that influence in a recipe for chile-pecan sauce for roast turkey, sourced from 1929’s Lone Star Cook Book and Meat Special (From the Slaughter Pen to the Dining Room Table). One of the rarest books in her collection, it was written by Artaway Fillmore, who was a chef at the Hilton in Dallas. The book “completes the story I wanted to tell about migration and what it meant to cook at a higher level.” 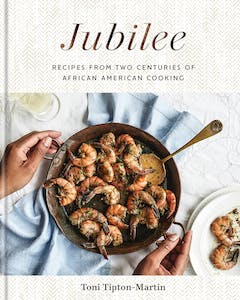 A more recent Dallasite, Jerrelle Guy, shot the photography for Jubilee. Determined to have a black creative team behind the book, Tipton-Martin stalled the book’s publication for a year while searching for the perfect photographer. “Part of my concern with this project is the lack of role models for future generations,” she says. “Photography is a great illustration of that dearth.” Once she met with Guy, they clicked immediately. “She was able to capture the essence of what I was feeling in my heart and spirit and mesh it with hers.”

In a nod to Texas, Tipton-Martin passes along this recipe for Southern Pecan Pie Laced with Whiskey. “In slavery days,” she writes in the headnote, “molasses pie, a cinnamon-spiced syrup-base pie without the nuts, was a Christmas treat.” The version in Jubilee, however, is “the time-honored version—sweet and gooey, packed with nuts,” with the twist of whiskey or rum.

1. Place the chopped toasted pecans in a small bowl and toss with the whiskey or rum until coated. Let stand 1 hour.

3. Roll the dough to fit a 9-inch pie plate, and tuck it in as the crust recipe directs.

4. In a stand mixer fitted with the paddle attachment, cream together the butter and brown sugar until light. Beat in the corn syrup, eggs, salt, and vanilla. Stir in the whiskey-soaked pecans. Pour into the pie shell, and arrange the pecan halves on top in an attractive pattern.

5. Bake until the filling is set but still has a slight jiggle in the middle, 55 to 60 minutes. (While baking, check to see that the edges of the crust aren’t browning too quickly; cover them with foil if they are.) Cool the pie slightly, then serve warm or at room temperature.

1. In a large bowl, whisk together the flour and salt. Sprinkle half of the butter and lard over the flour and use your fingertips, a pastry blender, or two knives to cut and mix until the mixture resembles large peas. Sprinkle in the remaining butter and lard and cut and mix to coarse crumbs. Sprinkle the dough with ice water, 1 tablespoon at a time, and use a fork to lightly mix until the dough just comes together and pulls away from the sides of the bowl. Gather the dough into a ball. Divide the ball in half. Press into two 1-inch-thick discs and wrap in plastic. Refrigerate for 30 minutes before rolling, or freeze for later use.

3. Roll out the dough on a lightly floured surface to about 12 inches in diameter. Drape the dough over the rolling pin or fold it into quarters and transfer to a 9-inch pie plate. Press the pastry evenly into the pan, without stretching to fit. Trim the edges and crimp decoratively, as desired. Prick the crust all over with the tines of a fork. Cut parchment paper to fit the bottom and halfway up the sides of the pan. Line the pie shell with the paper. Pour in pie weights, uncooked rice, or dried beans to cover the bottom and sides of the crust. Bake for 12 minutes. Remove the paper and weights and bake the crust 5 minutes longer for a partially baked crust, or 10 minutes longer for a fully baked crust, until it looks dry and crisp.