Nothing says “Happy New Year!” like the cork popping on a bottle of bubbly. And while Champagne is usually the go-to selection for this special occasion, premium sparkling wine is produced in wine regions all over the world and shouldn’t be overlooked. Some of those regions, in fact, once flew their flag over Texas at some point in its history. Indeed, when you consider the range of quality offerings from France, Spain, Mexico, the United States, and Texas itself, the real problem becomes deciding which one—or two, or three—bottles to pop to ring in the new year. In celebration of the year ahead, we’ve selected a few favorites with inspiration from the flags that have flown over the Lone Star State.

The first flag that flew over Texas belonged to Spain, which ruled most of Texas from 1519 to 1685 and from 1690 to 1821. Spanish sparkling wine is most commonly associated with cava, the official denomination of origin designated to Spain, which produces sparkling wine in the traditional Champagne method typically from macabeo, parellada, and xarello grapes. (And often at a fraction of the price of real Champagne.) Try Segura Viudas Brut NV ($12) or 2015 Juve y Camps Reserva de la Familia Gran Reserva Brut Nature Cava ($18), both offering elegant, structured bubbles and bright acidity setting off notes of citrus, tropical fruit, and white flowers.

The French flag flew over what became the Lone Star State from 1685 to 1690 and again from 1800 to 1803. As Champagne is the cornerstone for all sparkling wine, it’s only fitting to suggest a couple of noteworthy selections such as the Bruno Paillard Premiere Cuvée ($60), a classic representative of white Champagne, or the Palmer & Co Champagne Brut Rosé Réserve NV ($56), a delicious textural blend of chardonnay, pinot noir, and pinot meunier. If you want to venture outside of the region of Champagne for another French sparkling style, try the Gratien & Meyer Crémant de Loire Brut Rosé ($18) from the Loire Valley, with notes of red currant, pink grapefruit, and raspberries.

The third flag flown over Texas belonged to Mexico, from 1821 through 1836. Truth be told, sparkling wine production isn’t exactly a trend in Mexico just now—though there are plenty of stellar wines to seek out from the Baja and La Laguna regions of the country—so, we’re bending the rules a little and suggesting Mexico’s most preferred cocktail, la Paloma. Traditionally, this refreshing beverage is a blend of tequila, fresh lime juice, and grapefruit-flavored soda, but in the spirit of serving sparkling wine for New Year’s Eve, we suggest a slightly altered recipe: stir together 3 ounces fresh grapefruit juice, 1/2 ounce fresh lime juice, and 1 1/2 ounces of tequila; serve over ice in a Collins glass; and top with a couple of ounces of cava.

Perhaps the most revered flag to fly over the Lone Star State is the Texas flag. That’s why we celebrate Texas Independence Day on March 2, signifying the hard-fought independence from Mexico in 1836 and the establishment of the Republic of Texas, which lasted until 1845, when Texas joined the United States. Until recently, great sparkling wine made in Texas was hard to come by, with the exception of McPherson Cellars Sparkling Chenin Blanc ($28), which is still a consistent crowd pleaser. But more and more Texas producers have tried their hand at sparkling wine and with great success. The fresh, youthful 2017 Ron Yates Malvasia Bianca Pétillant Naturel ($25) is perfect as a fruity, floral aperitif. For more complexity, try the William Chris Vineyards 2014 Méthode Champenoise Sparkling Blanc du Bois ($50), which has been aged for five years on tirage for more body, character and complexity, or the Euphoria ($45), a floral blend of chenin blanc and muscat canelli from Grape Creek Vineyard’s sister company, Heath Sparkling, the first producer in Texas exclusively committed to sparkling wine production.

Sparkling wine as a category has long had a footing in the U.S. when you consider the great wines from producers in California such as Schramsberg Vineyards, Iron Horse Vineyards, and Domaine Carneros. We suggest Gloria Ferrer Sonoma Brut ($15) with notes of pear, melon, and toast, or the unique Frank Family 2015 Rouge ($55), a sparkling red wine—almost like a Lambrusco—made from extended skin contact with pinot noir juice, which results in subtle red fruit characteristics and spice aromas, a true conversation starter.

This story was updated to clarify the name of the Palmer & Co rosé. 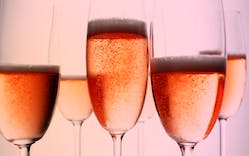 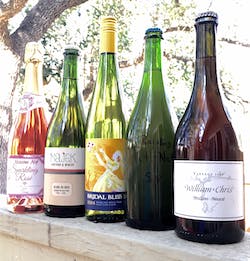 A Toast to Texas Sparkling Wine