You’re familiar, of course, with PTSD. But have you heard of PTRD? No? Well, let me enlighten you. Post-traumatic restaurant disorder is a stress-related mental health condition that afflicts individuals who eat out frequently. It emerged around the late nineties and soon became endemic in America. The triggers are loud music and conversation amplified by hard surfaces. Symptoms include shouting to be heard and the involuntary cupping of one hand behind an ear, accompanied by a compulsion to order cocktails with ridiculous names. The condition is aggravated by high prices, but it can be ameliorated by good food (technically that doesn’t help, but it does put the sufferer in a better mood).

Like many people, I have recurring PTRD. I try to dine early or late, but sometimes I just have to suck it up and see what a restaurant is like when it’s busy. “Here we go again,” I thought, standing at the entrance to Ritual, a popular two-month-old restaurant, taproom, and bar in the Houston Heights. Accompanied by the thumpa-thumpa-thumpa of music from a DJ prowling back and forth on a catwalk high above the well-dressed mob below, three friends and I threaded our way through a space that looked like a cross between a warehouse, a garage, and a barn. Normally this design cliché drives me crazy, but here it was so well done and over-the-top—a steel girder as the base for a table, galvanized metal pipes and fittings fashioned into a chandelier—that it made me laugh. Seated next to a statue of a flying pig, I somehow doubted that we would escape PTRD that night.

Scanning the offerings, it was clear that the Deep South, especially Louisiana, had been the menu’s guiding force. Evidence of this was a predictable lineup encompassing hush puppies, red beans and rice, hoecakes, and more. But novelty and experimentation had also been generously stirred in: the hush puppies included sourdough, the hoecakes were punched up with cheese and dried kimchi, and “ranch deviled duck eggs” graced the Texas Picnic Board. This could be fun, I thought.

Our round of appetizers started with boudin corn dogs (pictured). Actually, “corn dogs” was a stretch, but a light fried batter did encase each tidy ball of flavorful house-made Cajun rice-and-pork sausage. Alongside were pickled okra and a zingy sorghum-mustard dip. After this, we went for an old-school treat, the hoecakes. I’m no expert on the delicacy (allegedly they used to be slapped on a hoe or shovel and cooked over a fire), but Ritual’s miniature pancakes were not only tender but up-to-date, with cheddar cheese giving the classic a modern twist. The salty-sour dusting of ground dehydrated kimchi reminded me of the hot-pepper vinegar my grandfather used to sprinkle on absolutely everything he ate.

What exactly is this “Gulf seafood gravy,” we asked, staring when it landed on our table. The menu had described it as a tomato-and-seafood bisque, and, yes, it was rich and rife with pristine chunks of snapper, crabmeat, and shrimp. But the mild-mannered coral-colored soup was so lush and velvety it reminded me of a savory custard. Turned out that the secret was East Texas rice that had been cooked to a glorious mush. I could barely finish a cup.

Of the three entrées we tried next, the only one that did not really work was the chicken with Texas caviar. The bird itself was moist and beautifully smoked, but the black-eyed-pea-and-corn relish lacked spunk, and even though it was purposely served slightly chilled, we still wanted something hot. Quite a bit more successful was the monster surf and turf. An everything-but-the-kitchen-sink sort of dish (which they seem to like here), it was dominated by a pork sirloin and bolstered by oysters and New Orleans–style “barbecued” shrimp in a spicy Creole demi. The shrimp lacked tenderness and wanted to stick to the shell, but that flub was balanced by the very fine sous-vide and grilled pork. Even so, we found ourselves digging under the protein to extract some of the dish’s best parts, its wonderful bacon-braised greens and its polenta-like rice grits (a.k.a. much-prized “broken” Carolina Gold rice).

But the table favorite, hands down, was a monument to excess innocently labeled red beans and rice. In fact, it was a mountain of well-seasoned beans tricked out with a couple of dollops of risotto enriched with smoked Texas Gouda, then crowned by small logs of house-smoked kielbasa. If that weren’t enough, perched on top of them were molasses-glazed infant carrots. On the side was a skillet of rustic, Southern-style unsweet cornbread, ideal for sopping up every last bite of ham-hock broth.

A few days later, when I talked to Ritual’s primary owner, Ken Bridge, the CEO of Delicious Concepts, I was curious to find out if he had set out to join the Southern new wave. “Not really,” he said, explaining that his first priority was getting an enduring business, “something fantastic,” going after his previous restaurant in the same location, The El Cantina Superior, had gone belly-up. Knowing the neighborhood’s priorities, he brought in heritage-pig guru Felix Florez, of Black Hill Ranch, as a partner and lined up Erik Ogershok, formerly of Blanco’s Real Ale Brewing Company, to do a beer program. Chef Jordan Asher, recently of Dosi, consulted with Bridge on the menu, which is now under the direction of Albert Vasquez, formerly with the Del. As we wrapped up the conversation, Bridge asked how my experience had been. I said very good. I didn’t mention that I’d suffered a bout of PTRD but had left in such a fine mood that I’d barely noticed. 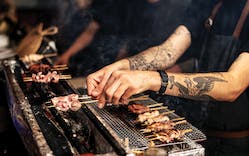 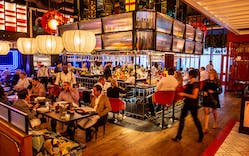 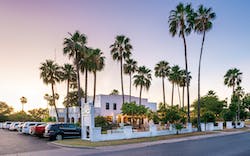 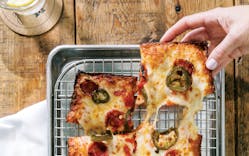