Who knows when tortillas were invented, if “invent” is even the right word? The ancient Maya were mad about them: According to their mythology, the first tortilla was made by a Maya peasant as a gift to his king some 12,000 years ago. The Aztecs too had tortilla technology down flat, judging from observations recorded by a Spaniard named Francisco Hernández in 1651: “They make with the palms of their hands thin tortillas of medium circumference . . . Some make these breads a palm long, and four fingers thick, mixed with beans and roast them on a comal. But for the important Indians they prepare tortillas of sifted maize, so thin and clean they are almost translucent and like paper.” The Spanish, knowing a good thing when they tasted it, did not tamper with this edible art form. Instead they embraced it, replacing the unpronounceable Aztec term tlaxcalli with the diminutive form of their own word for “cake,” torta; hence, “tortilla” means “small cake.” Over the intervening centuries, these delicious small cakes have flourished throughout the country of their origin (of which Texas, of course, was once part). Now they are commanding a larger stage.

Consider the following: Last year tortilla sales in the United States totaled an estimated $4 billion, nearly three times as much as ten years ago; Americans consumed approximately 91 billion flour and corn tortillas (and this doesn’t include chips). Tortillas are the fastest-growing segment of the U.S. baking industry, and they have become the most popular ethnic bread in the country, surpassing such wimpy contenders as bagels, naan, pita, and English muffins. Flour tortillas (which were invented after the Spanish brought wheat and lard to the New World) have surged in popularity following the creation of the wrap and now come in a multitude of flavors, including yummy ones like chile and spinach and dubious ones like blueberry and honey-apple-cinnamon. In short, these circular wonders are going where no tortilla has gone before: In 1999 industry giant Mission Foods even opened a tortilla plant in Coventry, England.

And yet these are also challenging times for tortillas, as the touchstones of the modern world—mechanization, modernization, and mergers—change how they are made and who makes them: What was once a cottage industry is fast becoming a global one. Check out most Texas supermarkets and you’ll find the shelves dominated by national brands, including Mission (based in Irving and the biggest tortillamaker in the country), Guerrero (also made by Mission), and Fort Worth- based Tia Rosa. (All three labels, incidentally, are owned by subsidiaries of huge tortilla companies headquartered in Mexico.) Big supermarket chains like Fiesta and H-E-B even have their own labels and also carry some of the larger regional brands. The best way to patronize a local company, however, is to get in your car and make the trip to a real live tortilla factory, such as Austin’s El Milagro or Houston’s La Poblana, in a Hispanic neighborhood (see “Getting Fresh,” page 87 in the magazine).

The smaller factories are dwindling—some that use their own name are really owned by the big companies—but they can still be found. One of the real old-timers is a place with an appropriately old-fashioned name, the Sanitary Tortilla Manufacturing Corporation of San Antonio. I happened upon it when I was visiting that city shortly after New Year’s, driving around in a daze from sampling the first of some 150 different tortillas that I eventually tasted for this story. Through the door behind the retail counter, I could see women and men in casual clothes and hair nets tending to presses and conveyor belts as corn tortillas streamed by.

“Do you think I could come watch the process?” I asked the clerk. “You’ll have to see the boss,” he said. A minute later I was shown into the office of the factory’s owner, 73-year-old Jesús Villarreal, who was reading the morning paper amid stacks of papers and file boxes. He said he would be delighted to show me around at six the next morning, three hours into the company’s daily routine. It makes 630,000 tortillas a week for walk-in retail customers and 94 local restaurants.

In important ways Sanitary is a relic of the past. To begin with, its workers cook the corn on the premises, heating it with lime (calcium oxide) in a process that has been used in Mexico for thousands of years. (Alkali processing causes a chemical reaction that frees up the niacin in the kernels, making the treated grain actually more nutritious than fresh corn.) The cooked corn is also ground at the factory, between two volcanic-rock millstones. The third link with the past is not something the factory does but something it doesn’t do: add preservatives and dough conditioners. Its thin, pure-corn tortillas—some of which are turned out by a few superannuated original machines that Villarreal keeps running with old bicycle chains and cobbled- together parts—are no different today than they were when the factory was founded in 1925. Said Villarreal: “I was told by the man who started the company that two of these machines were the first automatic tortillamakers ever used in the United States.” More than just a link with the past, the Sanitary tortilla factory is a living museum.

One hundred and fifty miles to the southeast, in Corpus Christi, is a tortilla operation of an entirely different scale: the 20,000-square-foot plant that belongs to the H-E-B supermarket chain. When I visited in February, it was in the midst of making its weekly quota of 12 million corn and flour tortillas, supplying all of the corporation’s 275 stores in Texas and Mexico. The factory runs 24 hours a day, seven days a week, keeping seven production lines and 138 employees busy. Unlike my tour of Sanitary, where the boss showed me around and fed me piping-hot tortillas fresh off the line, at H-E-B’s big metal building I was escorted by a cadre of four—plant manager Mike Reischman, two operations experts, and a public relations executive—who explained how everything worked (and fed me hot tortillas fresh off the line). H-E-B doesn’t grind the corn itself but starts with Maseca-brand dry corn flour (made by the ubiquitous Mission Foods). It also adds preservatives and conditioners to its dough, though not nearly as much, Reischman says, as some companies do. The product that rolls off its assembly lines is a thoroughly modern tortilla.

The ever-expanding tortilla industry is, or soon will be, at a crossroads. As of today, the old and the new, the large and the small, still coexist in Texas. But times are changing, so don’t wait forever to make that trip to your little neighborhood tortillería. Not long ago, I came across a news item and couldn’t help thinking that it was symbolic of what is happening to the business today: Last year the Guinness keeper of the records certified Mama Ninfa’s Original Mexican Restaurant in Houston for its achievement in constructing—what else?—the world’s largest taco. The specially made tortilla that swaddled the monster’s 1,045 pounds of spicy filling measured 32 inches wide by 16 feet long. Now that’s big. 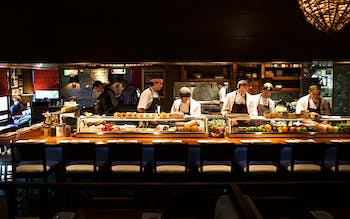 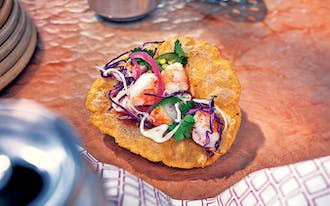 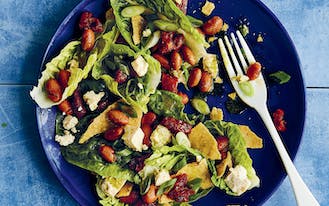