KATHERINE ANNE PORTER, the brilliant and turbulent writer, was a woman of many passions. In more or less the following order, she loved: men (four husbands, countless lovers), lavish clothes, scintillating conversation, and exotic food.

In January 1962—35 years ago this month—the author of Ship of Fools and two dozen short stories sat down at a typewriter and transcribed a “receipt” for “genuine Mole Poblana.” On New Year’s Day 1965 she scribbled a few refinements, and then the document collected dust until five years ago, when it was acquired, along with a handful of Porter’s other papers, by the Southwestern Writers Collection at Southwest Texas State University in San Marcos.

When I recently saw the fragile, aging manuscript, I became curious. How and when did Porter learn to make mole? Probably from her maid, Eufemia, while she was living in Mexico in 1930 or 1931. And why did she eventually copy the recipe? No one knows, and because Porter died in 1980, we can’t ask her. But whatever the case, the writer (who grew up in the tiny Central Texas town of Kyle) was ahead of her time, for the sultry chile-and-chocolate sauce did not catch on in the U.S. for decades.

With its recommendation to use canned mole powder, the recipe is hardly a culinary masterpiece; its value is in the glimpse it affords of a celebrity’s personal passions. Porter’s chipper notes show her decidedly at ease, and her humor and gusto are alive on the page:

“Receipt for genuine Mole Poblana—The National Dish of Mexico! Took this down from watching my Cook, a Pueblo woman, in Mexico. (Original dish in large quantities with a whole chopped up large turkey!)

She, of course, started by frying 7 kinds of dried hot peppers, all sizes and degrees of heat, parching almonds in fat, grinding bitter chocolate, etc. and reducing all to black oily pulp on the grinding stone. We will do as well—but more simply:

You will need: . . .
1 Pint strong fresh chicken broth—made the day before from a bundle of backs and necks. Chill in refrigerator overnight, skim off fat . . .
1 double square of bitter chocolate—(an ounce, more or less).
4 Tablespoons Clemente Jaques Mole Powder.
1 Teaspoon each Oregano and Cumin Seed.
4 Ounces Shelled Almonds, parched and ground—Easy way, put in blender with the chicken broth.
Salt to taste. . . .

Grind the almonds and chicken broth together in blender, (together with 4 Tablespoons of Mole Powder, the Oregano and Cumin.) Add chocolate. Pour over [previously prepared] chicken—mix well—it will be a rich dark sauce. Cover tightly and put in moderate oven until well cooked and blended. . . . That’s All! May it do you good— Katherine Anne (Porter) 29 January 1962 read again and slightly corrected, 1 January 1965!” 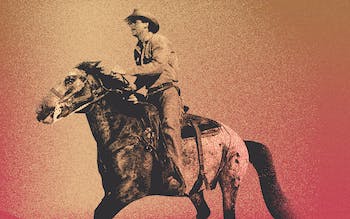 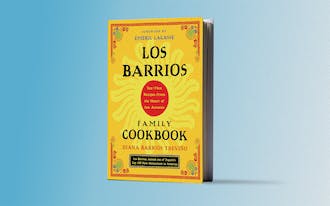 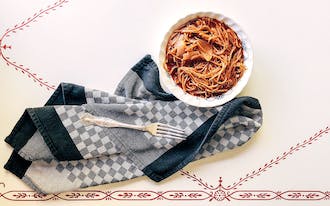 Thousands of Miles From Home, a Native South Texan Sets Out to Recreate a Beloved Family Recipe