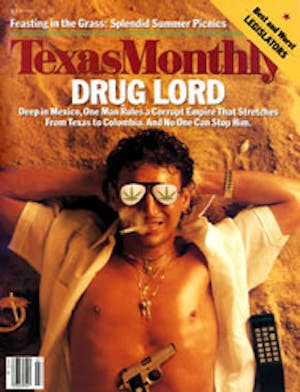 Categorical assertion: the highest and best use for this summer’s strawberries and peaches is Rex Hale’s shortcake. Hale is the young chef imported by Ella Brennan from her Commander’s Palace in New Orleans to help revitalize the menu at Brennan’s in Houston. Striking a nifty balance between the old and the new, Hale has obliged with updated Creole dishes like his feisty crawfish sauté, such New Southwesternisms as smoked quail glazed with red-chile jelly, and striking inventions like crawfish enchiladas, which are a whole lot less outré than they sound. Hale’s flashier Texas peers would dream up a complicated smoked-pepper sauce for those enchiladas, but he passes on what he calls la-di-da stuff in favor of an old-fashioned tomatillo sauce. Newness for newness’ sake is not his style.

When it comes to desserts, this Midwest native with the serene Botticelli countenance dotes on homey verities—crisps, cobblers, and light-as-a-cloud shortcake that is better than your mother’s. Hale’s secret? A shortcake mixture more like cake batter than biscuit dough, made with a good deal of sugar and vanilla and … ahem … solid white shortening instead of butter. “Shortening may not be fashionable, but in this case it makes the dough a lot softer and more supple. Shortcake got such a bad name from Dolly Madison and all that,” Hale says with a sigh, but he has given the dish new respectability: Brennan’s serves 25 to 30 shortcakes a night, and they’re gaining on the semisacred bananas Foster.

When the shortcakes are baked, Hale slices them in half, spoons the filling over the bottom half, pipes on a thick crown of whipped cream (you can just spoon it on), sets the top half back on, and sieves some powdered sugar onto the top. Garnish with a fresh mint sprig, and watch your friends swoon. Dolly who?