Free food and SXSW go together like tortillas, beans and cheese. But competitive eating champion Takeru Kobayashi had to earn his keep at SXSW Interactive on Sunday.

As Stern noted, the one-minute thing is sort of arbitary, but arbitrary is what RecordSetter does (they also participated in an attempt to set a record for most people to turn off their cell phones at once Sunday). Kobayashi’s top competitive eating rival, Joey Chestnut, holds what you might call the “overall” grilled cheese mark: 49 sandwiches in ten minutes.

The competition wasn’t quite so stiff in Austin. As Paul Sloan of CNET reported, the runner-up was David Tisch, an angel investor and managing director of startup accelerator Techstars. Tisch enjoyed his brief reign at the top:

I am the current world record holder for grilled cheese in a minute!! Kobayashi is up now…

As the video below shows, Kobayashi topped him in a mere 25 seconds, then picked up the pace. As is standard for elite competitive eaters, he dunked his food in water.

But wait … there’s more … gluttony, that is. On Tuesday, there will be an eating contest with a local flavor: the Torchy’s Tacos “SpecTACOlar Showdown,” in which contestants will go up against Austin competitive eater Hungry Todd Rungy, who, based on his online videos, just might be the Kenny Powers of competitive eating. 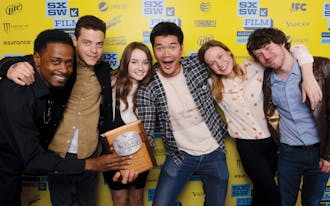