Rolando Curiel catches a lot of flak for calling his 21-year-old restaurant Taqueria El Ultimo Taco. As much a Brownsville culinary landmark as Vera’s Backyard Bar-B-Que, the place has a nearly identical name to that of an unrelated taco spot across the Rio Grande: El Último Taco: Los Originales, in Brownsville’s sister city of Matamoros. The Mexican restaurant predates the Texan one by about twenty years. According to Curiel, its disgruntled owner sent him cease-and-desist notices and threats of legal action in the early aughts. “It was nothing more than a bunch of letters,” he says. As the Brownsville native explains over the phone, Mexican trademarks are unenforceable in the United States, and the founder of the original El Último in Matamoros neglected to trademark his restaurant’s name here.

Unsurprisingly, the owners of the Matamoros taco shop have a slightly different take. Marcela Araujo, daughter of Los Originales founder Jaime Araujo, says, “My father started his business as a street stall in 1982 and built it into a restaurant. We’ve put in years of hard work  … I never thought someone would copy the name.” They didn’t send cease-and-desist letters, she asserts; instead, they paid for ads in the Brownsville Herald intended to distinguish their taqueria from Curiel’s. “It’s important people know that we don’t have locations in the United States,” she says.

Meanwhile, Curiel points out that he didn’t originally choose the name of his taqueria. He purchased the restaurant, which at the time was in nearby Harlingen, in 1998, from a friend. Harlingen, Curiel says, was a town that liked chains. He knew El Ultimo Taco would do better in Brownsville, a city that favors family-owned spots. Proximity to the border also meant that Curiel’s El Ultimo Taco would be closer to the original and could capitalize on its popularity. And Brownsville diners were more familiar with both restaurants’ shared specialty: the taco Matamoros, which Araujo claims her father invented.

Trademark kerfuffle aside, everyone agrees that this local staple is legendary. Each taco begins with slick, shimmering, doubled-up corn tortillas. Next comes the beef filling—choose from tripas, mollejas, barbacoa, or bistek. The meat is topped with a handsome wedge of avocado, followed by quick hits of chopped cilantro and raw white onion. Finally, it’s smothered in a flourish of grated queso fresco that provides an extra creaminess and salty punch. The most popular item, especially at the Brownsville El Ultimo, is the rich, quickly inhaled, and delightfully messy bistek taco, which has a shaved ribeye cap that curls and twists as it cooks. It all costs less than $2.

It’s also an iconic example of the area’s typical taco. Order a taco in Brownsville, and what you’ll get is the queso-fresco-topped meat taco. Curiel, of course, frames it specifically. “If you don’t know Ultimo Taco, you don’t know Brownsville,” he says.

But the taquero isn’t completely traditional. In April, Curiel released his version of Texas’s hottest taco trend: birria de res with and without cheese. The day he put the beautifully melted, asadero-cheese-filled, beef-packed quesitaco on the menu, the line formed down the street. “It was like half a mile long, from my door to the Jack in the Box,” he says. “It used to be tripas was my second-most popular taco, but now it’s birria.” Curiel claims to sell at least one thousand tacos de birria daily.

The popular item has contributed to a 30 percent increase in revenue, giving Curiel confidence to take reopening slowly. He already had sufficient capital to hire managers and servers laid off from other restaurants as delivery drivers while government orders required dining rooms to remain closed. Curiel says he might reopen his dining room and adjoining patio when Governor Greg Abbott increases occupancy capacity to 50 percent.

Until then, he’ll continue operating as he’s done for decades: not inspired by an abuelita’s recipes, but by going into every day at Ultimo Taco as if it were the taqueria’s first day. It’s something he says he read in a book by Wolfgang Puck. The Austrian American chef is an inspiration to Curiel. Ultimo Taco’s owner takes the elder chef’s words to heart, especially on ingredients—only the best— as well as on growth and branding. Even in this tough economy, Curiel is working on opening more Taqueria El Ultimo Taco locations and maybe even franchising—and all of it because of a deceptively simple beef taco. When you make it to Ultimo Taco, have your passport handy and (COVID-19 restrictions permitting) visit El Último Taco: Los Originales in Matamoros. It seems only fair. 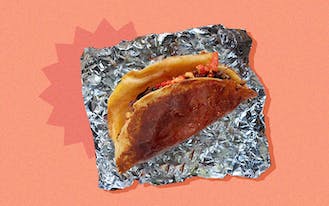 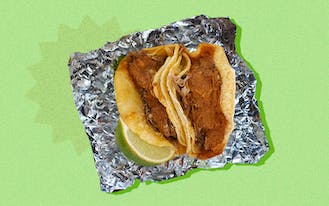