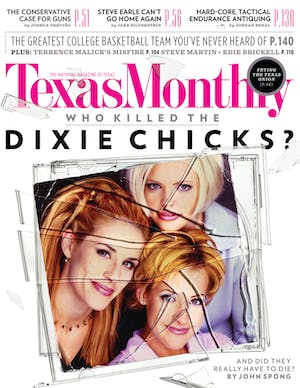 This just in: John Tesar, the famously volatile and notably talented Dallas chef, seems to have abandoned histrionics to focus on running a kitchen. This is a sad day for those of us with boring lives who were once riveted by Tesar’s verbal fisticuffs with other chefs and his well-chronicled departures from leading restaurants. On the other hand, it’s a happy day for members of the dining public, who are battening down reservations at his new seafood-oriented venture, Spoon Bar & Kitchen. There, over the past five months, he has fashioned a sophisticated, highly personal menu that bounces around from Japan to Spain to Korea to Italy to America yet somehow doesn’t fly into a million little pieces.

Located in tony Preston Center, Spoon gets you at first bite with an amuse-bouche of lightly curried tuna tartare tucked into a miniature waffle cone and topped with wasabi roe. This highly successful merger of India and Japan in an all-American container inspired our foursome to order some of the varied offerings of crudo. As we finished the first—Hawaiian bigeye tuna on wafers of cool Japanese cucumber with a mild oyster crema and bits of crispy artichoke—we were all smiling and nodding in unison. But the next one left us puzzled. Its dynamite flavor profile was sabotaged by niggling details: bitter, underripe sections of blood orange that overwhelmed the luscious chunks of spiny lobster and dabs of mint oil that proved nearly undetectable.

But the kitchen quickly righted itself with three starters. First came a creamy, oyster-laden broth shingled with shavings of black truffle. Second, amazingly tender wine-braised and grilled octopus paired with salty serrano ham and a purée of punchy, sweet piquillo peppers. Then the third arrived—cuttlefish sliced into tidy ribbons like pasta, matched up with Iberian pork, and finished with a lemony shallot-butter sauce topped with caviar. It was sensational.

Taking a breather between courses, we all agreed that next time we wanted to sit in the back room, at either the chef’s table or the counter around the open kitchen. Tesar, typically with his glasses pushed up on his forehead, rules back there. The upside is that you can see the action and may receive the occasional gratis nibble. The downside is that you’ll miss the front room, with its convivial bar offering not just drinks but the full menu. Designed by Breckinridge Taylor, both spaces are subtly nautical, with stark white walls setting off photographs of sand dunes, waves, and weathered piers. We ended up in an aqua wraparound booth, which was great for conversation and afforded a lively sidewalk view (although after an hour of staring at the glaring red sign on the gym across the street, I was ready to shoot it out).

Plunging back in, we continued our visits to international ports of call. Our most dramatic entrée was a bowl of crazy big, beautifully cooked whole prawns paired with a light kimchi pancake (really more like a Vietnamese crepe); I loved the flavors even though the amount of butter in the dish may have set a Guinness world record. A friend’s fine filet of roasted skate with Iberian pork was perfectly textured when it arrived at the table but grew waterlogged in its tomatoey-oniony Caribbean-influenced sofrito broth (maybe servers should advise guests, “Stop talking and eat!”). In the end, my favorite was the most straightforward, the crispy-skinned striped bass in a miso-based broth afloat with bits of tofu, monkfish liver, and cloudlike shrimp-filled ravioli.

After a seafood dinner, you may imagine that you’d have room for a lavish dessert, but pastry chef David Collier knows better. True, he does offer one blowout chocolate-caramel concoction, but usually he keeps it light, with fruit-forward creations like those he favored while working at the Mansion on Turtle Creek when Tesar was executive chef there, from 2006 to 2009. I was taken with his smart reprise of the main menu’s Japanese themes in a sweet-tart, tropical yuzu semifreddo; ice cream and cake crumbs, both scented with green tea, came alongside.

Spoon had been open for only a short while when I visited, and talking to Tesar afterward, I couldn’t resist asking about a few things. The first was obvious: Why seafood? “I grew up in New York on the east end of Long Island,” he said, “so seafood is in my blood.” But he credits his three years at RM Seafood, in Las Vegas, for his professional growth (“Rick Moonen helped me find myself and my style”) and Eric Ripert’s Le Bernardin, in New York, for ongoing inspiration (“I don’t know anyone who cooks seafood with more integrity and simplicity than Eric”).

My second question was why he chose a small, relatively unflashy venue. “I always admired Sharon Hage when she had York Street here in Dallas,” he answered, “and the model of a chef going to the market in the morning and cooking for guests in the evening—that’s what I fit into now.” At the end of the conversation, I had to inquire if the sturm und drang of a few years back is truly over. “Some of that was conjured,” he said, meaning basically it was, well, an act. “And some of it was my own restlessness.” He sounded positively reflective: “It’s a wise man who can leave his ego behind.” These days he just wants to cook and make a lasting mark on the local dining scene. He says, “When people in Dallas think of seafood restaurants, I want Spoon to be on the list.” No worries. It already is. spoonbarandkitchen.com