Tim Byres likes to play with fire—and smoke. He made his reputation smoking various and sundry meats at a Dallas restaurant named, yes, Smoke and then wrote a cookbook with the same title. He’s of the opinion that almost any food can be improved with a little smoke, or at the very least by being grilled.

A few months ago, prompted by a tantalizing rumor among fellow grilling devotees, Byres managed to track down a 1953 newspaper article that contained an outrageous recipe for something called the Eisenhower Beefsteak. It seems that President Dwight D. Eisenhower used to astonish guests at the White House by throwing enormously thick steaks directly on a bed of smoldering coals. Fascinated, Byres tried the technique himself and found that not only did it work, it produced delicious results. The steaks looked burned beyond redemption, but beneath a gleaming ebony crust was meat that was flowing with juices and tender as a lover’s kiss.

Eager to share his infatuation, he invited five chef friends to come to his other Dallas restaurant, Chicken Scratch, for an outdoor potluck*, stipulating that all their dishes had to involve smoking or grilling. Danyele McPherson, who is in charge of the kitchen at Remedy, brought a sweet potato salad jazzed up with smoked almonds. Matt Balke, the chef de cuisine at Smoke’s new Plano location, concocted a warm salad of lemon-spritzed artichokes and fennel. The owner of Italian trattoria Lucia, David Uygur, toasted thick slices of country bread and made a tomatoey bruschetta. Teiichi Sakurai, proprietor of Tei-An and Ten, gave chicken his trademark yakitori treatment. And Katherine Clapner, known for her confections at Dude, Sweet Chocolate, cooked up a crazy pineapple upside-down polenta cake in a cast-iron skillet on the grill. The delectable results of these recipes prove—perhaps once and for all—there’s no such thing as too much smoke.

First, a Word About the Eisenhower Method

My recipe definitely falls into the go-big-or-go-home style of Texas cooking (or Texas anything). Although Dwight David “Ike” Eisenhower was raised in Kansas, he was born in Denison, which is proud to call him a native son. I did not know he was such a huge fan of firewood cooking until I found an old article headlined “The Eisenhower Steak Recipe,” by Ralph McGill, in the Miami News, dated May 26, 1953. This is how you make the fire.

a charcoal grill, a fire pit, or a large area on the ground for a campfire
2 large bags of charcoal, such as mesquite (charcoal briquettes will not work)
a charcoal chimney
3 sheets of newspaper
long-handled garden hoe
long-handled tongs or a meat hook

All big fires start with a small fire, and to get the small one going, you need a charcoal chimney. (This avoids the use of charcoal lighter, which you do not want anywhere near your steaks.)

Stuff a good fist-size wad of newspaper in the lower chamber of the chimney, fill the top part with charcoal, and light the paper with a match. The paper will smoke and smolder for about 10 minutes as it slowly lights the charcoal. Once the starter coals are red-hot (gray on the outside) pour them into your grill and rake them out evenly with the hoe, chopping and breaking them up to make a fairly flat surface. Pour all the remaining charcoal over the hot coals, chopping and spreading it several times.

(If you have firewood around, you can make some of your own charcoal. Build a live fire by shingling in two split logs on top of the starter coals, then add about 6 split logs to get it roaring. The fire will take about 1½ hours to burn down to coals.)

When the fire is evenly hot, chop and spread the coals one last time to release a blast of heat. (You can also fan them to stoke up the heat even more and remove excess ash.) Season the steaks (see Eisenhower Beefsteaks with Gorgonzola Butter) and place them directly on the coals. Cook about 8 minutes on each side, turning with tongs or a meat hook. The steaks are done when the internal temperature, measured with an instant-read thermometer, reads 130 degrees.

Please do not cook these steaks more than medium-rare, because too much time on the coals produces a thick, almost overwhelming char. The goal is a very blackened edge and a red, juicy interior. —Tim Byres 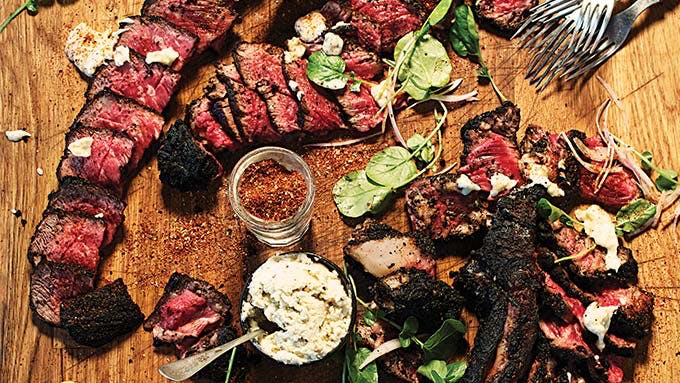 Mix the ingredients in a bowl, breaking up any lumps.

In a mixing bowl or food processor, blend all ingredients until smooth.

Preheat grill. Coat steaks thoroughly with Brown Sugar–Coffee Rub and grill until medium rare. Allow to rest about 10 minutes, then cut into 1/2-inch-thick slices. Top with Gorgonzola Butter and garnish with watercress, shallots, and a squeeze of lemon. 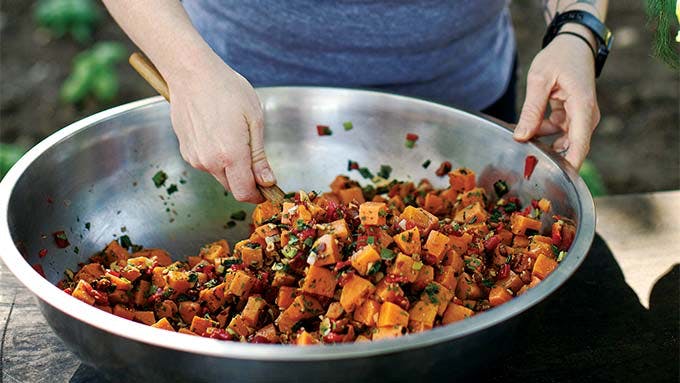 Put almonds in a food processor and pulse until finely ground. Reserve. Blend tomatoes, peppers, vinegar, garlic, cayenne, paprika, and salt in food processor. With the processor running, slowly add olive oil and then the reserved almonds, blending until smooth.

Preheat oven to 350 degrees. Rub the whole peppers with oil. Place on a sheet tray and bake until completely soft, about 45 minutes, rotating the tray and turning the peppers every 10 to 15 minutes. While peppers are still very hot, place in a large bowl, cover tightly with plastic wrap, and let steam for 15 minutes to loosen the skin. Peel skin off and cut peppers into small dice. Refrigerate until ready to use. Makes 1 1/2 cups.

Preheat grill. Rub green onions with olive oil and sprinkle with salt. Grill until white of the onion has softened a bit and the stems have a bit of char. Cool and slice into 1/4- to 1/2-inch pieces. Cut sweet potatoes into 1/2-inch cubes. Place in a large pot of salted water and simmer until tender (do not boil). Drain and allow to cool. In a large bowl, toss green onions, sweet potatoes, red peppers, bacon, almonds, and parsley. Add the Romesco Sauce and mix thoroughly. 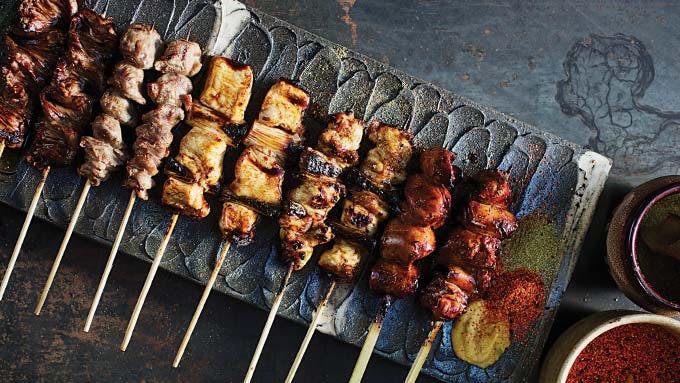 In a saucepan, bring ingredients to a boil. Immediately reduce heat and simmer until sauce is consistency of a light syrup, about 2 hours. Strain.

Preheat grill. Cut chicken into pieces about 1 1/2 inches by 1 1/2 inches. (Sakurai also likes to use the liver, gizzard, and heart.) Thread on skewers and grill, turning, just until surface of meat lightens, about 2 1/2 minutes. Brush chicken with Yakitori Sauce on all sides and cook until done, another 2 1/2 to 3 minutes, applying sauce a couple more times. Do not let flames touch chicken. Meat is done when firm to the touch but not hard.

Give each guest a skewer of chicken. Place condiments in small bowls or divide among plates. 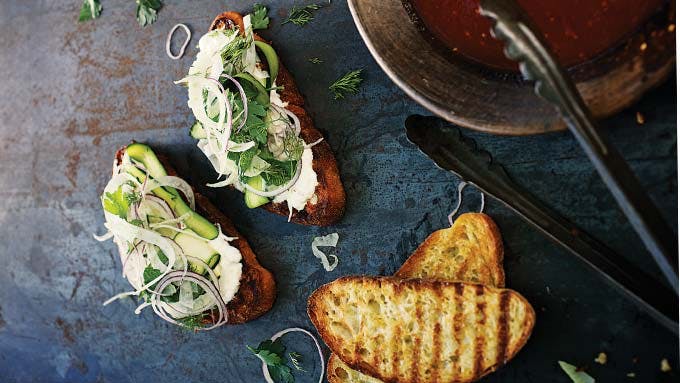 Preheat grill (can use a toaster or panini press). Brush bread with olive oil and grill until a deep golden-brown on both sides. Grate tomatoes using the large holes on a box grater and put juice and pulp in a nonreactive bowl or pan. Stir in garlic, 2 tablespoons olive oil, and salt. Briefly soak bread until it is thoroughly moist but not soggy. Meanwhile, in a separate bowl, toss sliced zucchini, fennel, herbs, and onion with olive oil and salt. Set aside. Spread bread generously with stracciatella and arrange zucchini mixture attractively on top. Serve on a platter garnished with reserved herbs. 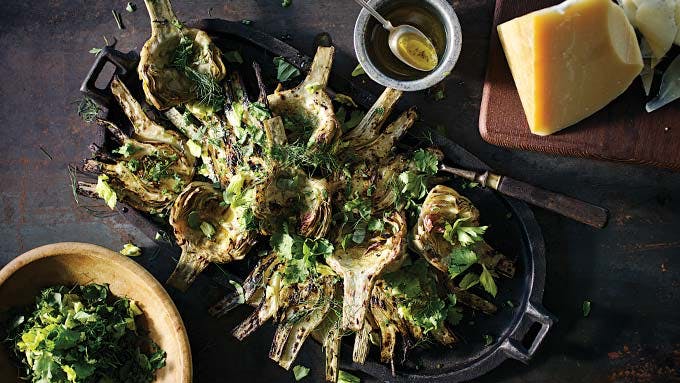 3 or 4 whole fresh artichokes
4 medium lemons (juice all 4 and zest 2)
3 or 4 whole fennel bulbs
1/4 cup extra-virgin olive oil, plus some for brushing
1/4 cup each roughly chopped herbs and greens such as parsley, thyme, tarragon, basil, fennel fronds, celery leaves, and mint (should yield minimum of 1 1/2 cups)
1 teaspoon kosher or sea salt, or to taste
1/2 teaspoon coarsely ground black pepper, or to taste
chunk of Parmesan for shaving (or about 1/4 cup grated)

Preheat the grill and prepare a large pan of ice water. Trim the stem of each artichoke to about an inch. Remove tough outer leaves. Cut each artichoke in half lengthwise. Remove and discard the choke. Put artichoke halves in a large pot of salted water with about 2 tablespoons of the lemon juice and simmer until soft, about 20 minutes. Plunge artichokes into ice water to stop cooking and then drain on paper towels.

Cut off the stalks and fronds of the fennel bulbs. Trim each core (but not so much that bulb falls apart). Slice bulbs lengthwise into ½ inch-thick pieces. Brush artichokes and fennel with olive oil and season with salt and pepper. Grill until lightly charred, about 5 minutes per side. (Fennel should be just tender to the touch.)

Meanwhile, in a large bowl, mix the remaining lemon juice, zest, oil, herbs, salt, and pepper (it should taste very lemony). Toss artichokes and fennel with mixture. Place on a platter and shave Parmesan over top. Serve at room temperature or chilled. 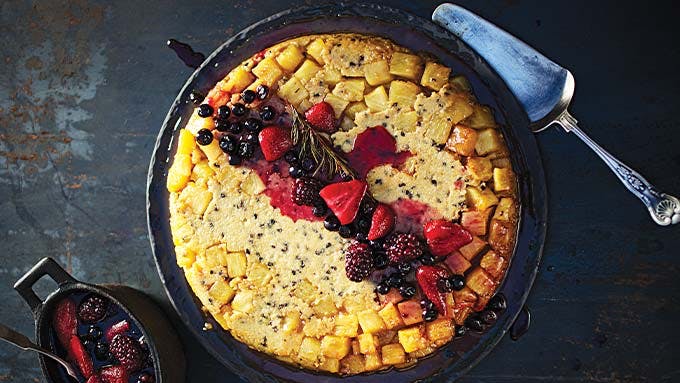 Preheat grill. In a 10-inch cast-iron skillet, combine butter, brown sugar, cream, and nibs. Over medium-high heat bring to a boil. Reduce to a high simmer by moving to a cooler part of grill. Reduce the liquid by half, until it is the consistency of a thick caramel sauce. Add pineapple and cook until liquid is again reduced to thick caramel consistency, 5 to 10 minutes.

In a separate 10-inch cast-iron skillet over high heat, combine the first six ingredients and whisk until they come to a boil. In stages, whisk in the cornmeal. Cook, stirring continuously with a wooden spoon, until mixture is consistency of thick oatmeal (takes only a few minutes; a spoonful placed on a plate will hold its shape). Stir in ricotta.

Pour the polenta mixture over the pineapple mixture in its skillet (do not stir). Gently rap skillet on a counter to dislodge any air bubbles. Smooth top of polenta and cool skillet to room temperature (cake should be about the texture of bread pudding). When set, invert onto a large platter.

1 sprig each of rosemary and thyme and a fennel frond reserved vanilla bean seeds
juice and zest of 1 lime
3/4 cup sugar, or more to taste
1 1/2 cups apricot rakia (a fruit brandy) or brandy, or less to taste
3 pints assorted fresh berries

In a small cast-iron skillet, combine everything but the berries and cook over low coals until mixture is consistency of a light syrup (reduce by about half). Meanwhile, stem berries and cut large ones in half, or slice. Strain sugar mixture and pour over berries. Serve on the side or pour over cake.