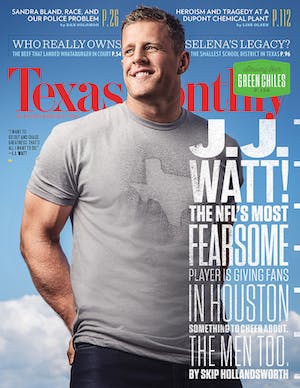 It is a splendid time to be a drinker of cocktails in Texas, what with the flurry of freshly opened bars across the state. Austin’s Townsend is one of the most noteworthy, operating under the leadership of Justin Elliott, who formerly headed up the much-lauded bar program at chef Paul Qui’s eponymous eatery.

Situated on Congress Avenue, across from the historic Paramount Theatre, the Townsend serves drinks that are as at home in modern-day Austin as they might have been in the golden age of film. Employing familiar ingredients and simple preparations, Elliott wants his contemporary creations to seem as if they could have been plucked “from the pages of The Savoy,” he says, referencing the 1930 cocktail manual from London’s legendary Savoy Hotel.

As September is National Bourbon Heritage Month, we look to one of the Townsend’s whiskey drinks. The challenge, though, with celebrating “America’s Native Spirit” (so declared in a 2007 Senate resolution) this month is that the Texas weather is not exactly conducive to the big, boozy affairs that dominate the classic canon of whiskey cocktails. The whiskey sour is an exception to this rule—whiskey shaken with lemon and sugar, often with an egg white—but that combination doesn’t sit well with Elliott. “I’m not a huge fan of bourbon drinks with citrus in the summer,” he explains. “Something about the wood and acid always presents more tannin than I like.” For the Lamplight, he solves that problem by throwing more booze at the drink, Drambuie in this case. The honeyed Scotch liqueur is married with 100-proof bourbon, lemon juice, and a dash of Chinese-five-spice bitters, making for a perfectly refreshing whiskey tipple—modern but tasting as if it could have been around for decades.

Combine ingredients in a shaker and shake vigorously with ice to chill. Strain into a chilled Nick and Nora glass or small cocktail coupe. Garnish with the expressed oil of a lemon peel and a lemon twist.