Mention hunting to most Texans and the quarry that comes to mind is the white-tailed deer. With dozens of TV shows, million-dollar breeder bucks, and leases easily starting at $2,000 per gun, chasing whitetails in Texas is big business. Add in the scent-blocking suits, laser range finders, and nutritional supplements (for the deer) and it’s easy to see why, on a per-pound basis, the most expensive meat a Texas hunter will eat all year is not a dry-aged strip steak from Pappas Bros. but the hindquarter of the old buck he shot at his lease.

It didn’t used to be this way. For much of the twentieth century, especially in East Texas, the pursuit of a smaller creature—the squirrel—dwarfed deer hunting in importance. “When I started squirrel hunting,” says Royce Johnson, a 65-year-old retired farmer who lives in Center, “there were fifty or sixty big squirrel camps just in this area.” Today there’s only one, in San Augustine County.

Of course, there were a lot more squirrels back then, and a lot fewer deer. Today much of the good squirrel habitat in East Texas has disappeared; paper companies, which own millions of acres of Texas forests, are maximizing their fiber production by taking out old hardwood stands and replacing them with pine plantations, dense clusters of young pines that are clear-cut every fifteen to thirty years. Deer do well in this new habitat. Squirrels do not. “The whitetail is more of a generalist,” says Clayton Wolf, of the Texas Parks and Wildlife Department. “He’s a bit more resilient.” 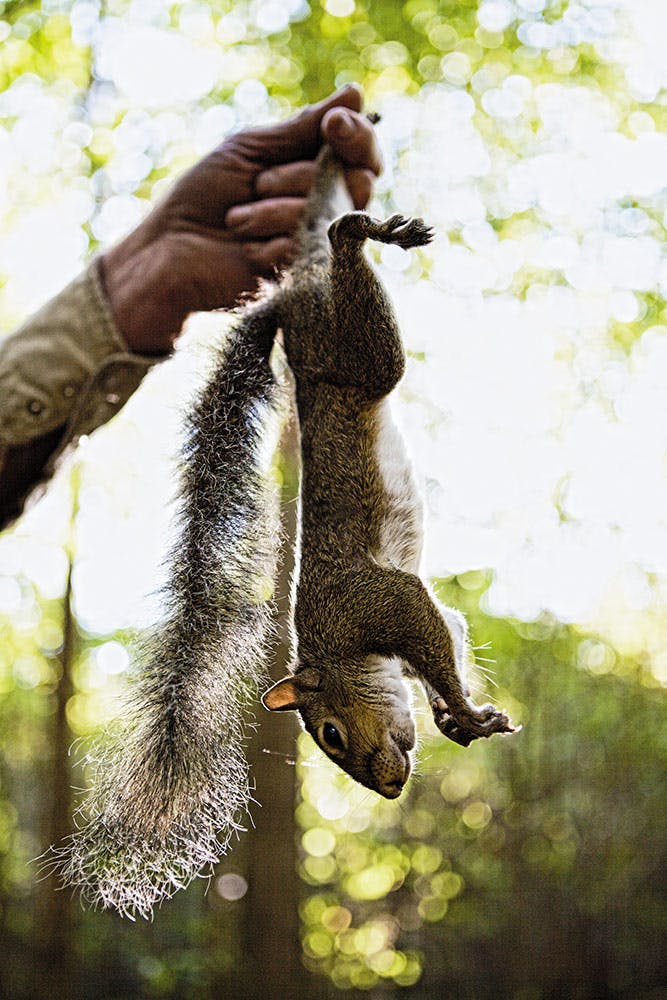 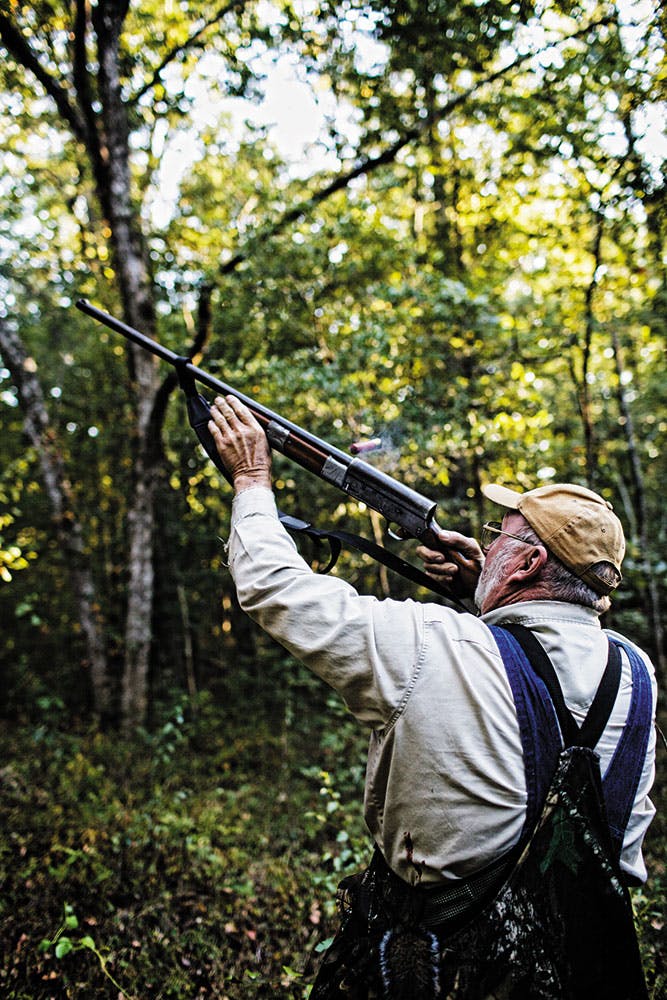 If you’re used to spending evenings browsing the Cabela’s catalog, squirrel hunting will seem almost too simple, requiring only a shotgun and a Case pocketknife (trapper model, preferably handed down from your grandfather). It also requires a lot more movement than deer hunting. “You have to stalk each animal individually,” says Wayne Willoughby, who has been hunting squirrels for 60 of his 68 years. “Whereas with deer hunting, you sit there and wait and the buck just walks in front of you.”

To get to the last squirrel camp, turn off Texas Highway 7 outside Center and drive about ten miles down winding dirt roads. You won’t find it unless you’re following someone like Royce Johnson’s 45-year-old son, Lynn, a computer programmer. Lynn has been squirrel hunting since he was 5 or 6. He learned how to do it from his father, who learned from his father and grandfather.

The camp itself—a couple of acres of oak bottom attached to a 1,700-acre hunting lease—has been here so long that no one knows exactly how old it is. There are hundred-foot pines and oaks and a rustic pole barn complete with a commercial stove, sinks, a generator, and tables for playing a dominoes game called 42. There are pickup trucks and campers ranging from modern trailers to a converted 1948 bus. 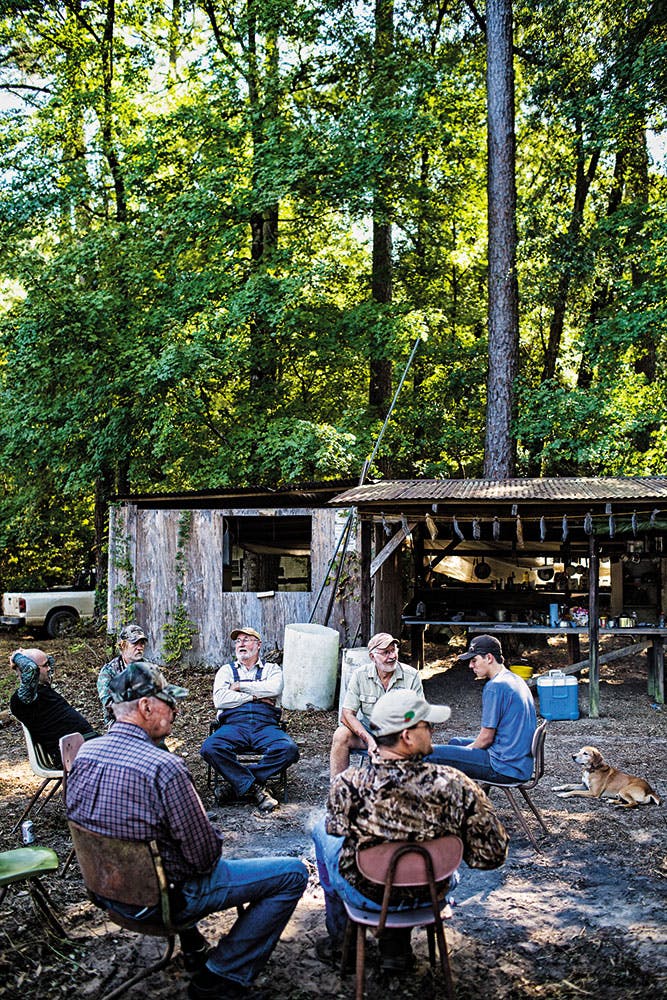 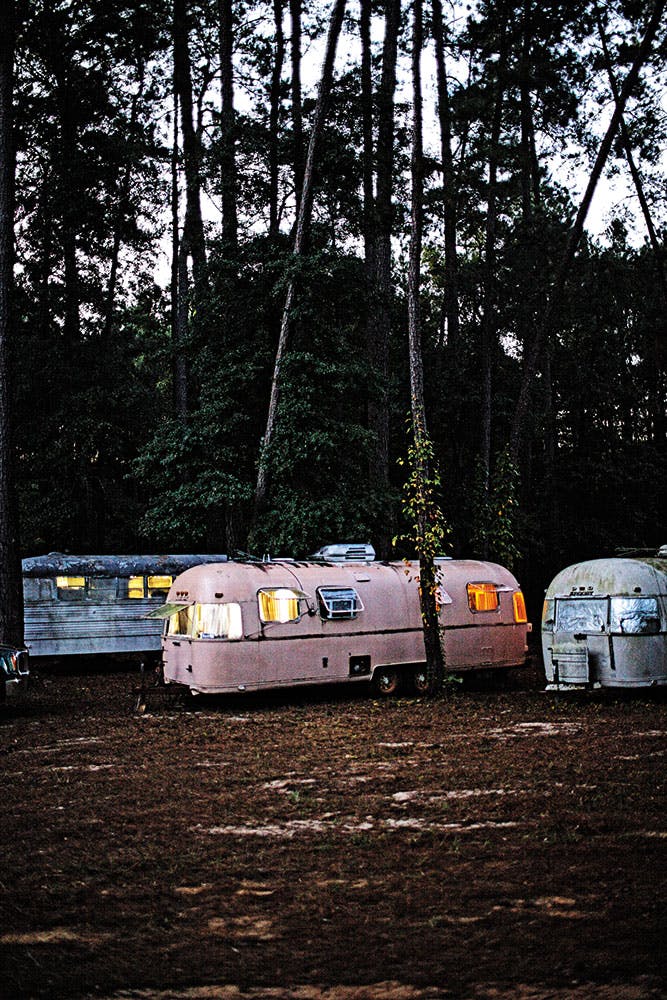 The men gather as the hunt winds down; many hunters leave trailers at camp all season long.

On the weekends especially, what is most striking about squirrel camp is the number of children. And women. People drinking soda, playing dominoes, doing a lot of visiting. The testosterone vibe of a deer camp is entirely absent.

A day in squirrel camp begins at five a.m. The fire is stirred and a communal breakfast of venison sausage, local eggs, fried biscuits, and black coffee is served. Hunting begins just before sunrise. I am paired with Wayne, who lends me the proper shells for my Remington 11-87 shotgun: #6 shot high brass. I’ve used this shotgun to harvest deer, turkeys, and pheasant but never squirrels. I wonder how hard it can possibly be.

If you’re used to seeing squirrels at your bird feeder, the idea of hunting them doesn’t sound too challenging. But the difference between a yard squirrel and a woodland squirrel is like the difference between the deer that stands in your driveway eating your tulips and the skittish white-tailed buck that won’t let you come within a mile. Wild squirrels, wild deer—they stay alive by avoiding predators. You don’t sneak up on them by accident.

I follow Wayne into an ancient oak bottom, the canopy ten stories above us, only a dim light filtering in. The understory is mostly open, but there are scattered stands of cane, holly, huckleberry, and pine. The birds are just waking up, Carolina wrens, a few warblers or vireos I can’t identify, and a cardinal. We stand listening and looking, and after ten minutes Wayne spots a squirrel high in a tree, cutting acorns. We spend another ten minutes stalking it, feeling the ground with our feet, taking care not to crack twigs, keeping our eyes on the treetops. When the squirrel moves, we move; when it stops, we stop—always careful to keep a screen of leaves between us and the animal. Wayne aims and fires, and the squirrel drops onto the forest floor. At that same moment I hear rustling overhead and see another gray squirrel running between the crowns of the oaks. I lead it and fire twice. It too drops to the ground. Wayne puts both animals in his vest.

“I get the same excitement when I see a squirrel as when I see a buck,” Wayne whispers. Though there’s a difference: “Once you see the deer, the hunt’s over.” He’s right. My hands are shaking, and I can’t stop craning my neck, scanning the treetops. 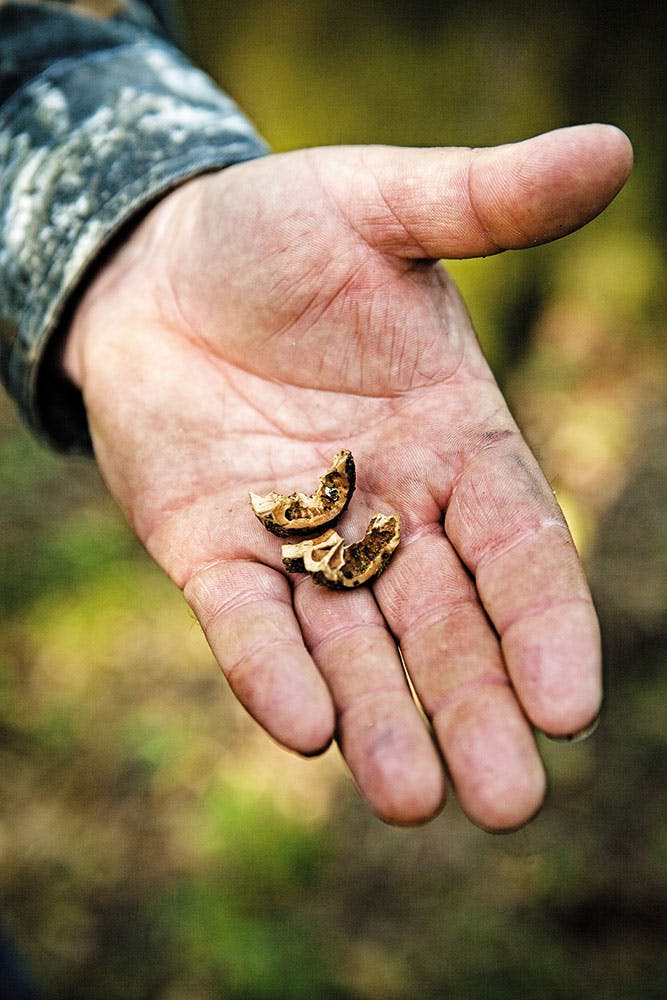 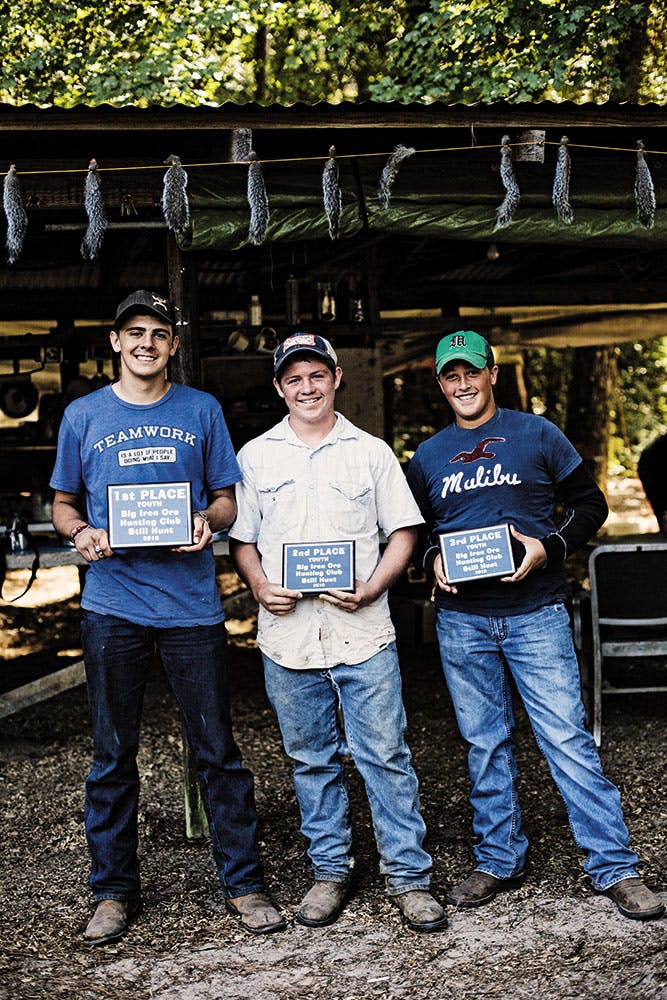 A few hours later we’re back at camp. I have bagged three squirrels to Wayne’s seven. The other hunters trickle in, and preparation for lunch begins. Squirrel camp revolves as much around eating squirrels as it does around hunting them. When everyone has returned, a sort of assembly line forms, a young person pairing off with an older one, and the squirrels are graded, sorted, skinned, and cut into pieces. Kids here don’t need Michael Pollan to tell them where their food comes from. They can look at an acorn and tell you the type of oak it fell from; they can name most of the animals that live or pass through the forest. They know that the squirrels they shoot in the morning will be eaten for lunch—and not just by people in camp.

“We’ve got a long list of people in the county that we bring squirrels to,” says Royce. “Most of the older folks around here grew up eating squirrel, but maybe they don’t hunt, or can’t hunt. They sure love to see us coming.”

The older squirrels, too tough to fry, are put on ice to be cooked in mulligan stews, ragouts, or with dumplings. The young squirrels, cut into six bite-size pieces, are dredged in flour and pan-fried. I approach them with trepidation, but they are tender, juicy, and mild. It’s like eating chicken wings but a bit more . . . squirrelly. I go back for seconds, then thirds, which no one thinks is odd. “I usually put on about ten pounds in squirrel camp,” says Royce’s 34-year-old son, Ed Johnson, a loan officer in Center. 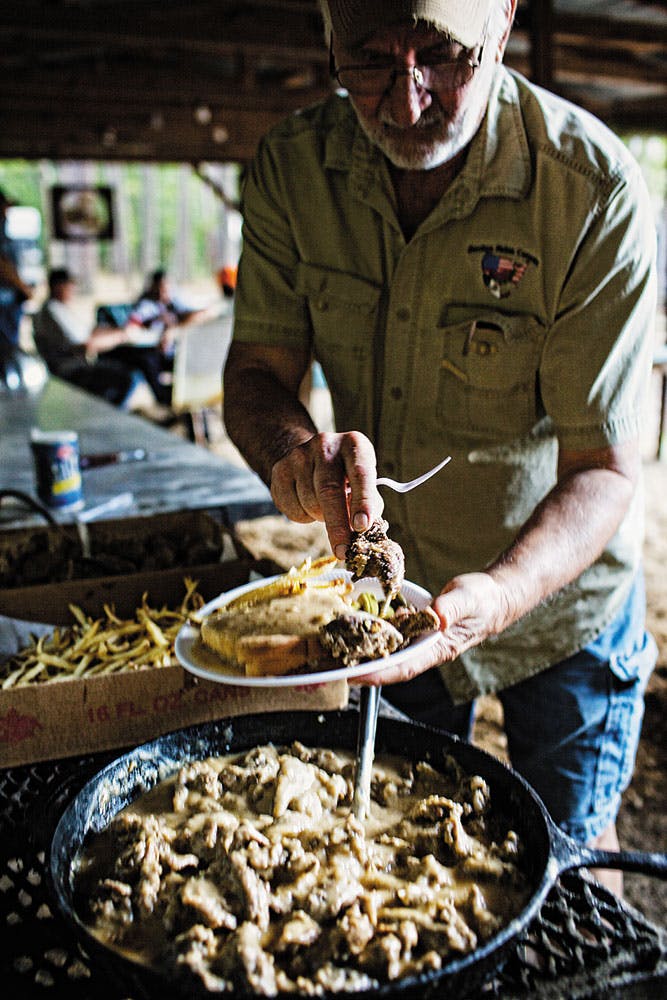 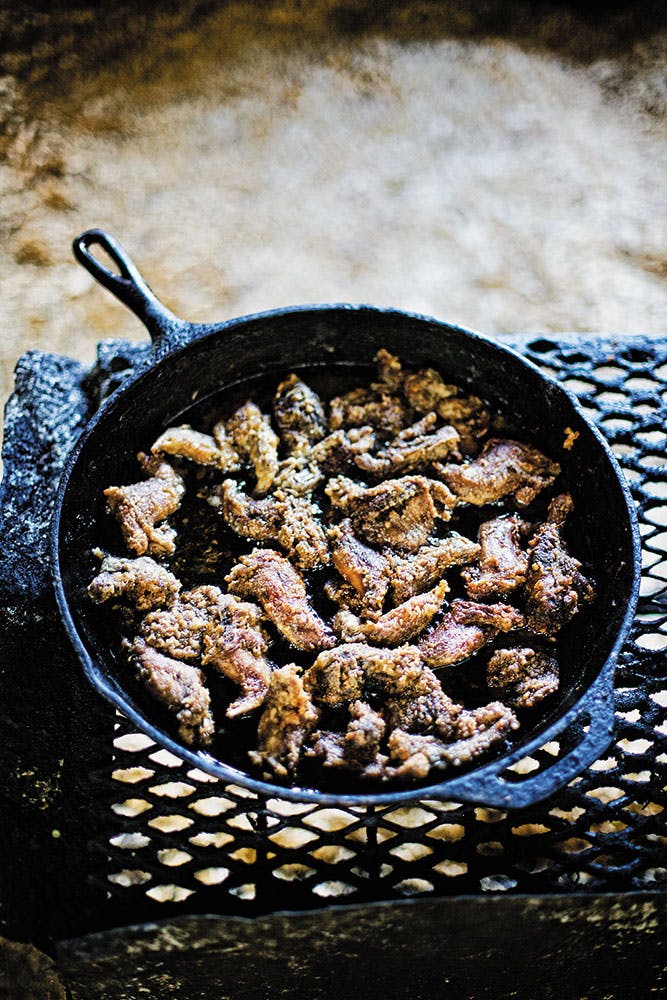 Wayne Willoughby fills his plate; because the older squirrels are too tough, only the younger ones get fried.

When lunch is over, we sit in chairs around the campfire ring, surrounded in every direction by tall pines and oaks. It’s sunny and there’s a pleasant breeze. People continue to arrive, dressed for eating and playing dominoes rather than hunting. “You know,” says Royce, apropos of nothing in particular, “I’ve got nothing against computers. But I find them so boring. I can sit on a stump just about anywhere in the woods and be fascinated for hours.”

Everyone, including 15-year-old Clayton Wright, nods in agreement. I’m reminded of something 74-year-old Sam Arnold told me the previous night: “When you come out to a place like this, you get a sense that God was pretty complete in his operations.”