Technically it wasn’t cooking. But the single worst culinary misadventure I’ve ever had did start in the kitchen—in a loose sense, anyway—and was inspired by a very real craving. This craving was my college roommate Sam’s, who declared one Saturday morning of our junior year at Texas State that he had a hankering for the sweet, sweet taste of prickly pear.

We had decided, soon after waking, to greet the day with margaritas. As fully devoted practitioners of the university experience, this seemed to us perfectly reasonable. But rather than go with any old tequila-and-lime standby, Sam—moved by nostalgia, perhaps, or a desire for novelty in the face of another plodding semester—proposed that we try a variation he’d recently discovered in far West Texas, where he had spent the summer working as a river guide. The outfit that had hired him was based in Terlingua, and as one is wont to do after long days shepherding tourists down the Rio Grande, he had developed an appreciation for the Starlight Theatre, a local restaurant and watering hole. There, over many evenings on the stone porch, swapping songs and tall tales with leathery locals and whoever else happened to blow in, Sam had come to love the Prickly Pear’ita, a margarita flavored with the juice of the cactus fruit and stirred to an icy, glistening crimson-red.

“It’s the best drink I’ve tasted north or south of the Rio Grande,” said Sam, who besides his own leathery tan had also returned with hippie-length hair and a decidedly more Edward Abbey–esque worldview. Despite his tireless research at the bars around San Marcos, he continued, he had yet to find its equal, which meant that there was no remedy but to re-create it ourselves—from scratch. “First,” he announced, “we’re gonna need some prickly pear.”

After recruiting my girlfriend, Lauren, to help us, we armed ourselves with a pocketknife, kitchen tongs, leather gloves, and a plastic bucket and set out for where we imagined we might find the appropriate cacti: Purgatory Park, on the outskirts of town. Our quarry, we’d learned through a hasty internet search, was the fruit of Opuntia engelmannii, otherwise known as cow’s tongue cactus or Texas prickly pear. Over one hundred varieties of cactus grow in Texas, but prickly pear—the ordained state plant—is special. For centuries it served as the lifeblood of indigenous cultures across the region, its water-rich ovate pads, or nopales, a salvation for many a parched tongue. Its egg-shaped fruit, called a tuna in Spanish, is sweet but not overly so, like watermelon with an earthier undertone, so delicious that it has become a darling of both confectioners and  mixologists.

The plant is also, of course, prickly, as a cactus should be, which presents some challenges for harvesting. But empowered as we were by our internet knowledge, we had not given this a whole lot of thought. Instead, after parking in a caliche lot and heading down a path into the wilderness, we considered our newly acquired facts, like that the cactus blooms in spring but can take up to five months to ripen, and that the rind and flesh mature from melon-green to dark-purple, and that the fruit twists off easily when it’s ready, and that using a set of tongs lowers one’s odds of being stuck by the long spines that radiate out from every pad. We had brought the tongs, so what was there to worry about?

Searching among the cedars and grass, we soon found a healthy cluster of cacti and set about carefully detaching the tunas one by one, filling half our bucket. Satisfied with this bounty, we returned to the house, where Sam consulted the internet again to study up on how exactly to process our crop. Meanwhile, Lauren and I shucked our gloves and began scrubbing the tunas in the kitchen sink. This seemed like an obvious place to start, because of course  you wash fruit that you’ve picked in the wild.

It was a matter of minutes before we realized our terrible mistake. Though we had outmaneuvered the nail-size spikes on the nopales, we had not yet learned that tunas too have a defensive shield: glochids, which, if your botanical lingo isn’t up to snuff, are “the barbed bristles on the areoles of some cacti.” These near-microscopic needles hardly sting on contact, but once they sink in, they burn like hellfire—a sensation we felt first in our hands, as a constellation of blisters spread from our fingers across our palms. Next, strangely and awfully enough, our faces erupted, an unnatural rouge sweeping across our cheeks. I looked up at Lauren, the pain of our folly provoking tears. Her expression of horror was somewhere between post-aftershave Macaulay Culkin and the haunting visage in Edvard Munch’s The Scream.

And scream we did. Or at least that’s how I remember it. Lauren and I abandoned the crusade and retreated to the couch, while Sam—an expert on all things prickly pear after a few minutes of Googling—shook his head at us and pressed on, donning his gloves to load the fruit into a pot of boiling water. (This, it so happens, is the standard and much safer method for knocking loose those tiny horticultural terrorists.) While the tunas steeped in hot water, Sam taught us the ancient river-guide trick of using duct tape to rip out embedded cactus spines. Lauren and I would spend the next few days taking turns yanking tape off each other’s skin.

Sam then moved the boiled tunas to a blender, pureeing the fruit until it became a vibrant-hued slush of pulp, seeds, and juice. Since some glochids, stubborn little devils, can occasionally remain, the next important step was to strain the slush—except that our paltry collection of kitchenware did not include a fine-mesh strainer. Having read that cheesecloth could be used instead, Sam, in a flash of inspiration (or maybe it was the tequila he’d started taking nips of), decided he would solve this problem with a pillowcase. This worked beautifully, until, pleased with his savvy improvising, Sam turned to move the pillowcase into the sink, and toppled the mixing bowl he’d been using to collect the treasured juice.

A blood-red stain blossomed across the carpet like a Rorschach test. Sam, staring in anguish, as if he’d just had to put Old Yeller down, was as low in that moment as I’d ever seen him—and I’ve known him since the third grade. But there was still some juice left in the pillowcase. Rallying, Sam squeezed it into a small saucepan, added some sugar, and simmered the mixture until he had a few ounces of rose-pink syrup. He poured the final product into a waiting margarita glass. There was enough to make one drink. He took a sip—and wrinkled his nose. It wasn’t nearly sweet enough. He’d skimped on the sugar. “Not the best margarita I’ve ever had,” he recalled recently.

In the years since our culinary folly, I have gone on to master other, safer Texas classics: chili, guacamole, chicken-fried steak, gringo enchiladas. Should I ever wish to repeat our endeavor, there are YouTube videos that teach one how to harvest and cook prickly pear with minimal trauma. I have also learned that you can go online and just buy prickly pear syrup—like, in a bottle, for $10. I’m not sure I’ll ever go for a reprise, though every once in a while, when the plum-colored pods are ripening on the wild cacti that grow around the property where I now live, I get to thinking out loud that a prickly pear margarita sounds mighty fine. Lauren, who despite our trials is now my fiancée, reminds me about all the duct tape.

Sam, for his part, makes it a point to stop by the Starlight every time he’s in Big Bend. He hasn’t tried to replicate the Prickly Pear’ita again, a decision shaped as much by our travails that morning as by a final botanical retribution wrought by Purgatory Park: the day after our quest, Sam awoke to find his body covered in a rash so severe it made Freddy Krueger look like some kind of lotion model. During our hunt for tunas, apparently, Sam had brushed against some poison ivy. His left leg still bears the scars.

The Starlight Theatre Restaurant & Saloon has been serving its cactus margarita for so long that no one can recall its exact origins (wilder explanations involve cameos by Native Americans and Pancho Villa). The key ingredient, says owner Lisa Ivey, is Pure Prickly Pear Syrup, a proprietary concoction. However the drink came to be, here are Ivey’s instructions for making your own. No harvesting required.

In a medium saucepan, bring 1/2 cup water to a boil and add sugar, stirring to dissolve for 2 to 3 minutes. Cool to room temperature, then add lime juice, Pure Prickly Pear Syrup, and 1 cup water. Stir well and chill. The recipe yields 2 3/4 cups of Pear’ita mix, which is good for about 7 drinks. To make a single Pear’ita, pour 1 1/2 ounces tequila and 3 ounces of the mix over ice, stir, and garnish with a lime wedge. ¡Salud!

*Note: order the syrup from the restaurant ([email protected]) or the Terlingua Trading Company (432-371-2234, ghosttowntexas.com). 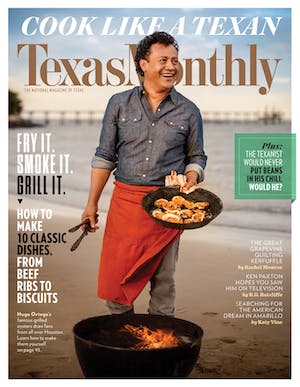