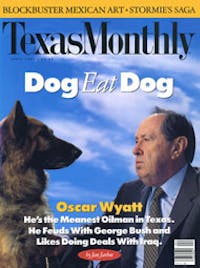 The waitress at the Holiday Inn restaurant near Houston Intercontinental Airport had just delivered my bowl of chili when Chuck Thompson leaned for a closer look. “The texture is pretty good. It’s red enough,” he commented, adding that you can always “red up” chili with paprika. He hovered over the bowl for a moment, inhaled deeply, and furrowed his brow. “The aroma is all right, but it’s not spicy enough. Then again, the texture isn’t too loose.” All in all, we agreed, it was a pretty fair bowl o’ red.

Thompson should know. As the author of Chuck Thompson’s Canned Chili Report ($5, from Box 11652, Houston 77293), he has set out to establish himself as the ultimate authority on canned chili. His qualifications are simple: “I have been eating canned chili at least twice a week since 1955.” He got his start while working at a television station in Mobile, Alabama. He had just interviewed cowboy star Hoot Gibson, and Gibson asked where he could get a good bowl of chili. Thompson knew a restaurant with a chili reputation, tasted some himself, and has been hooked ever since.

“I ate so many different brands I started saving labels to remember which ones I’d tried,” Thompson said. “I wrote my comments on them, like ‘too sloshy.’ Then a few months ago, I’d heard Mister Blackwell talk about who dresses well and who doesn’t. I said, ‘Gee, if one guy can express his opinion about that, I’ll express my opinion about canned chili.’” Cans come naturally to Thompson. He has tried making his own chili from scratch and using packaged spice mixes, but he fretted over the waste because he’s the only member of his family who likes the stuff.

Each can is judged on taste, color, eye appeal, aroma, consistency, aftertaste, slosh (“I shake cans at the grocery store. I like mine so you can shake it but is doesn’t sound like soup”), and grease (“I put an opened can in the fridge overnight and see how much grease congeals”).

So which cans does Thompson like best? “I’m torn between Wolf Brand and Hormel,” he says, “If you eat a lot of canned chili, Hormel is easier on the stomach. But Wolf Brand has a bit of an edge.” On the other hand, he’s not too fond of canned chilis from Cincinnati. “They’re so watery, it’s no wonder they’re all made with beans, instead of without.” Ouch. That kind of comment might leave them howling in Ohio, but maybe the criticism can help Thompson realize the goal of the report: “Let’s upgrade canned chili.”

At least Thompson is a Texan. Some other recent developments in the world of chili make me want to holler, “New York City?!” just like those cowboys in the Pace picante commercial. For starters, Wick Fowler’s Two Alarm Chili mix, the granddaddy of packaged chili spices, is no longer made in Austin but in Louisiana (all together now: “Louisiana?!”). Several years ago, Fowler’s children sold out to Noxell, which was later taken over by Procter and Gamble. Last December, Luzianne Blue Plate Company acquired the chili business and transferred production to New Orleans. The Austin office is down to one salesman and some clerical help.

At Terlingua, once home of the world championship chili cookoff, warring factions are no closer to making peace after years of feuding. Since 1983 there have been at least two cookoffs held on the same November weekend, one of them sponsored by CASI, the Chili Appreciation Society International, and the other by the disciples of deceased Texas chili czars Wick Fowler and Frank X. Tolbert. The squabbling left the door open for promoters to stage the so-called official world championship cookoff in Newport Beach, California (one more time: “California?!”). Yes, the same state from which a business called Hotsicle Incorporated is trying to sell consumers Chili on a Stick and the same state where Texas White Chili, a concoction containing white beans, Monterey Jack cheese, and chicken breasts, was invented. All of which makes canned chili seem positively appealing.