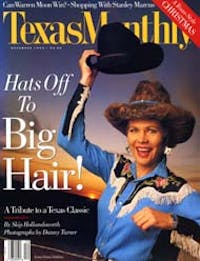 Phil Dyer is standing in front of the shelves of his tiny roadside market in San Antonio. Both of us are silent, our heads bowed. We are doing what all devoted food shoppers do: gazing lovingly at jars of olives, mustards, oils, fruited and herbed vinegars, jams, butters, preserves, sauces, relishes, and chutneys.

Of course, these aren’t ordinary jams and mustards that command our rapt attention. These are the very best, hardest-to-find jams and mustards, the kinds of rare and exotic condiments and ingredients one hopes to discover but rarely does, certainly not all on one shelf and not across a four-land highway from a Bun ‘n’ Barrel and next door to a Red Carpet Inn. At Farm to Market, a shopper can buy some of the finest ethnic and gourmet foodstuffs, meats, cheeses, seasonal fruits and vegetables, wines, and baked goods available anywhere in the state. Those who know the heartbreak of driving from supermarket to supermarket in search of specialty items such as Italian Gorgonzola, Swiss chocolate, and Mexican cajeta; simple things like fresh figs, smoked chicken, yard eggs, Texas goat cheese, or the perfect baguette; or even an authentic surprise such as Tuscan rosemary raisin buns or Caravali coffee roasted in Seattle, can know the relief of exploring the fragrant intimate spaces of Farm to Market. “We like it to be a shopping experience, instead of something you have to do,” Dyer says of his store, which is as good a reason as any why the market sells so few things you actually need.

Dyer has a blond mustache and usually wears blue jeans. His blue eyes are open wide. He hasn’t really looked at these shelves in a while, it seems. “Sometimes you forget everything you carry,” the 37-year-old former farm boy says. In a bigger, more impersonal store, this statement would be meaningless. But Dyer’s Farm to Market is a mere 3,200 square feet and looks, at first glance, like some farmer’s makeshift highway enterprise, which in a way it is.

Dyer grew up in the Rio Grande Valley, studied agronomy at Texas A&M University, and started his rapidly expanding business nine years ago by selling tomatoes and onions out of bushel baskets in an old Exxon station. Back then, he had to run out in the middle of U.S. 81 and hand out business cards to get people to stop. Now his produce stand, stylishly covered in red brick with green awnings, is Texas’ most sophisticated epicurean market. People drive all the way from Laredo to shop here. They don’t come to stock up on Comet or Cheerios, since Farm to Market doesn’t carry such banal things. And they don’t come for vegetarian dog food or positive-imaging tapes, because Farm to Market is not a health food store. Rather, the staff here, most of whom wears jeans or shorts, think of themselves as operating “an upscale down-home fresh-food store,” says the market’s produce buyer, Alan Bland.

Dyer and I have been on a slow tour that began at the entrance, in the relatively large produce section, where Bland, a self-described aging hippie, banters with the customers, most of whom he knows personally. “Okay, let’s expedite this,” he says, moving in to help at one of the three cash registers when a patron with a loaded basket blissfully drifts into what is beginning to be a line.

The produce section is the origin—and the heart—of Farm to Market­, which carries an unusually high percentage of perishables. I count, among other seasonal offerings, nine kinds of plums for sale, along with an equal number of varieties of potatoes. I make note of the fresh cactus pears and the Walla Walla and 1015 onions, admire several colors of raisins stacked up with the dried berries and other fruits, and spy some unusual dried chile peppers—tepín, morita, and super-hot habanero. Farm to Market does carry organic produce, distinguished by discreet orange stickers, and the baked goods are all made with organic flour. But there’s no emphasis on organics. “Our store is known for the pursuit of excellence,” says Bland, explaining that quality and eye appeal, not political correctness, are the top priorities.

So is fashion. General manager Ken Herzig, who also selects the wine and beer, is up-to-date on the trendiest ingredients. He reads the gourmet cooking magazines as soon as they hit the stands and stocks the items necessary for interesting recipes. His customers, mostly from the nearby affluent neighborhoods of Alamo Heights and Terrell Hills, sometimes ask for items the store doesn’t carry, but Herzig makes the effort to find them. And Herzig is such a snob that if a local supermarket picks up one of his brands—of bottled roasted peppers, for example—he’ll try to find something better.

Over the years, Herzig, Dyer, Bland, and everybody else in the store have had to educate patrons as to why those apples and lettuces cost more than at other stores (they’re riper, fresher, hand selected, and the pick of the crop) and what you can do with cajeta, which is caramelized goat’s milk (stick you finger in the jar and eat it like candy or spread it on cake or pour it over ice cream). For additional assistance, the market recently started a newsletter with seasonal recipes and menus.

But for food tourists—who like to just gape and fantasize and don’t really cook—the market how has its own modest-sized kitchen, turning out entire ready-to-eat meals. The kitchen is in a converted railroad car, snug up against the bakery. Under the direction of chef Cathryn Tarasovic, it packages up dishes such as cream of cilantro soup or sweet-potato vichyssoise (two of more than one hundred seasonal soup choices), smoked chicken-and-brown-rice salad (from more than one hundred choices of salads), and entrées ranging from red posole stew to Viennese meatballs. Try asking for any of those things in your fancy supermarket deli.

When he started Farm to Market, Dyer, who was joined first by Bland and then by Herzig, decided after about a year of selling produce that excellent and expensive was the store’s niche. Following their intuition, they added on the meats and cheeses, mustards and coconut milk, wines and brioches, carrying out this upscale strategy in every department. Not one of them had ever been to a place like Dean and DeLuca’s or Balducci’s, two of the country’s premier gourmet groceries in New York City; and until recently, Dyer had rarely been outside of Texas. Herzig, however, had lived all over Europe as a teenager and had developed a connoisseur’s palate. Still, they had no blueprint, no marketing plan for what they were doing. Dyer picked the filing station that became Farm to Market mainly because it was in the part of town he knew best.

Dyer has managed to remain slim, possibly due to his sixty-hour work week. I find it incredible that he could refrain from overindulging in the fine foods that surround him. We float pleasantly past the imported pastas, pestos, risottos, and cheeses, as we move into the domain of affable butcher Jose de la Cruz, who uses his big smoker over to custom-smoke clients’ game as well as the market’s chops, ribs, spicy chicken wings, tenderloins, and seafood. The cases display trendy fish, such as escolar and tilapia, a freshwater perch (“The catfish of the nineties,” says Dyer), as well as tuna, blacktip shark, and Norwegian salmon—none of which has even been frozen, swears De la Cruz. He shows off the organic free-range chickens, prosciutto di Parma, andouille, chorizo, smoked-chicken-and-apple sausage, and fresh pâtés. And then we are standing in front of the bakery.

If there were no other reason to go to Farm to Market, its idiosyncratic bakery would be enough. Rivaled mainly by Debra Auden’s LocuStreet Bakery, the Farm to Market bakery offers possibly the broadest and most international range of baked goods in the state. In fact, the bakery was started by Auden, who left within a few months to go across town to open her own bakery, which is connected to the restaurant Biga, operated by her creative husband, chef Bruce Auden.

The Farm to Market bakery is now run with distinctive style by former University of Texas art student Kate Lawrence, who studied food, among other things, for a year and a half in Italy. The Italian aesthetic defines the earthy yet elegant simplicity here. Lawrence leans toward regional Italian specialties, such as schiacciata con l’uva, a coffee-cake-like focaccia stuffed with grapes and topped with raisins, walnuts, and rosemary—an unforgettable blend of nutty, sweet, and green-herbal flavors. But she doesn’t exclude other ethnic influences; the bakery offers more than one hundred different breads and muffins, ranging from chocolate bread and an olive tapenade baguette to Irish soda bread with cardamom and currants and pear-walnut tea cake, plus eye-popping seasonal fruit tarts and pies and items like panettone or bûche de Nöel, all made with fresh ingredients from the store.

The bakery fills the market with aromas form its hardworking ovens. Its shelves are loaded with Pugliese, a sourdough bread with whole-wheat flour; Tuscan dark and white bread; sourdough loaves stuffed with mozzarella, sun-dried tomatoes, and basil; and focaccia right out of the oven, topped with sliced sweet onions, garlic, rosemary, roasted vegetables, and cheese. Steaming on top of the counter are a deep-dish tart made with five kinds of plums and an apricot and blueberry pie, both of which look like something out of a storybook.

Not all of the baked goods or the prepared foods are available all of the time. Many are seasonal. Customers who plan a long-distance trip to Farm to Market should visit on a Saturday, when the market is well stocked and offers free samples of delicacies and wines. It’s a good idea to call ahead to order baked goods.

The store has some weaknesses. It is such a small place that it can’t carry everything. The salad and leafy-greens section is only adequate, and the cheese and deli sections, though top quality, are limited in scope. Dyer is working on these problems, and he has plans to expand the store, more than doubling it with another four thousand square feet by year’s end.

Farm to Market has created its own homespun Texas-style place in the gourmet grocery world, catering to people who savor the best things, such as nature’s finest grapefruits or a perfectly made loaf of bread. Dyer’s business philosophy is centered on living well. “I don’t aspire to be rich,” he says. “I aspire to a high quality of life.”