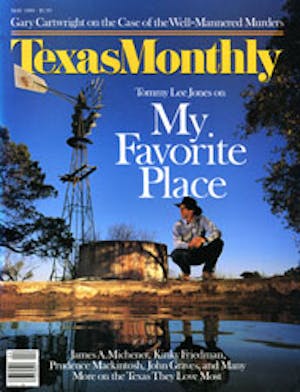 The restaurant, with its soaring central gazebo and stripped-down exposed structure, seems stark at first, like a fast-forward version of a nineteenth-century crystal palace. But a close look at the carefully appointed space in the Quadrangle in Dallas, where each table is draped in linen and brightened with fresh flowers, reveals the underlying classicism ­­— dignified, yet somehow celebratory — that is characteristic of Actuelle’s style. Almost as proof of the interior’s combination of grace and athleticism is a trophy case, just inside the entrance, that is filled with golden loving cups, medals, and statuettes. They are the fruits of Victor Gielisse’s efforts in a score of culinary competitions. The blue-ribbon chef, properly attired in full chef’s uniform, from tall white toque to clogs, completes the picture. He may well be Texas’ most decorated chef, the Audie Murphy of the kitchen.

In the slow midafternoon hours, however, you’re less likely to find him on the line tasting a sauce or perfecting a presentation than sitting at a quiet table, hitting the books. The 35-year-old Gielisse spent two years preparing for the Culinary Institute of America master’s certificate; in February he completed the grueling ten-day examination. Of the 36 chefs in the United States who have passed the exam, only 2 are in Dallas — and one of them is Victor Gielisse. In fact, he won yet another trophy, the Crystal Chef Award, for finishing at the top of the class. The intensive study has deepened his commitment to the great traditions of cuisine. “You realize again,” he says as he gestures toward a mammoth edition of Escoffier, “that everything we do is based on classical cuisine. Basically it’s all been done for us — we didn’t have to invent anything.”

While many New American chefs, especially in Texas, are translating old favorites into New American cuisine — their menus feature updated versions of meatloaf, fried chicken, and pumpkin pie — Gielisse is on a different track. Born in the Netherlands and trained in Europe, he combines an Old World reverence for culinary history with a New World relish for the future. He approaches regional ingredients not with nostalgia but with a sense of discovery, creating a cuisine that is both firmly traditional and highly original. Imaginatively conceived, carefully refined, and flawlessly presented, dishes such as his ragout of California snails with sweetbreads and basil tortellini and his grilled Atlantic salmon with tarragon-mustard sauce have earned his restaurant an impressive reputation far beyond Texas.

Gielisse’s current kitchen opens, California-style, onto the restaurant. The kitchen is relatively small, with only seven cooks besides Gielisse, who works closely with each station. The original idea for a dish may come from anywhere — a Dutch childhood staple, Italian carpaccio, or Cajun gumbo; any of his travels; or well-thumbed cookbooks and cooking periodicals — but it emerges from the kitchen transformed. Carpaccio (salmon as well as traditional beef) is streaked with Parmesan-and-garlic mayonnaise and livened with peppery chicory; beef-and-barley soup is not the heavy, hearty dish one expects but a clear, assertive broth bejeweled with the little dice of a vegetable brunoise; and gumbo is married to a French-style seafood stew and garnished with a semi-Mexican salsa that carries oriental undertones of rice vinegar and ginger root. The result is a complex layering of flavors, each tone distinct but balanced expertly against the other ingredients. Gielisse invents dishes that seem to develop a history as they linger on the palate.

Like most good cooks, Gielisse was inspired by his mother. His parents — and his grandparents before them — owned a restaurant in Scheveningen, where Victor was born. “Holland is not exactly known for its cuisine,” Gielisse admits with a wry smile. “At home we ate lots of cold-weather food — soups and stew — and, of course, lots of seafood. At the restaurant the menu was mostly seafood prepared in an international French-influence style.”

When Gielisse was thirteen, he went to technical college, and after he finished his apprenticeship at seventeen, he worked in Europe. “I studied about game and pastry in West Germany,” he recalls. “In Switzerland I learned about international cuisine and about catering to very sophisticated, wealthy customers. Italy taught me about regional cuisine, and I came to appreciate the earthy quality of good Italian cooking.”

In 1973 he was hired by Westin Hotels, eventually coming to this country. Gielisse joined up with Houston’s Westin Oaks as the executive sous chef in 1979. “Victor and I met at the Westin Oaks,” remembers Clive O’Donoghue, Gielisse’s partner in Actuelle. “He was very opinionated. I remember thinking he was like a technician — he was so consistent.” Gielisse also worked closely with the Westin’s director of catering, Kathryn Gray. “The catering director and the chef are traditionally on opposite sides,” says Kathryn, “but it was extreme in our case. Victor and I used to fight like cats and dogs. He was a perfectionist, and he still is.”

After teaming up to open the Dallas Westin Blom’s restaurant, Victor and Kathryn stopped working together — and got married. In just a short while the couple and their friend O’Donoghue started planning the restaurant that would become Actuelle.

Avoiding the confinements of “New American” and “continental” labels, Gielisse cointed the term “cuisine actuelle” (today’s cuisine) for the kind of food he wanted to serve in his new place. The restaurant, designed by Dallas’ Duncan Design Associates, opened in October 1986, with Clive running the front of the house, Kathryn handling the public relations and the books, and Victor working in the kitchen.

There in his province, Gielisse doesn’t hurry but gives time-consuming attention to detail. He often uses lengthy marinades to enhance the flavor and texture of foods, and breading may be a mixture of ground nuts, bran, and brioche crumbs to add still more flavor and rich texture. Accompaniments and garnishes expand and complement the qualities of the main dish. The savory sweetness of onion marmalade and the peppery roughness of game sausage round out the flavor of roast pheasant while a creamy corn pudding adds smoothness. Gielisse frequently uses more than one sauce to complete a dish, each one emphasizing a different taste: A bourbon-cheese sauce underscores the luxurious heft of beef tenderloin; the accompanying raw relish of pepper and jicama is in direct contrast to tender meat and silky sauce.

Not everything is as complicated as that sounds. When it comes to fish, for instance, Gielisse’s technique is uncompromisingly simple, though exacting in its standards. “Fish is hard to cook,” Gielisse admits. “It has to be done exactly right. If it’s raw, it’s raw-the issues are still connected. But if it’s overdone, it’s inedible. You have to cook it à point, as the French put it, meaning to the point, precisely. But all it takes is practice. The stove does it for you.”

Small things receive close attention: Instead of the usual steamed or sautéed “bouquet” night after night, Gielisse varies the vegetable side dishes. One evening may feature sautéed potato pancakes (his grandmother’s recipe); another night may bring a baked Gorgonzola polenta or tournéed yams. The constant experimentation with different techniques keeps the kitchen interested as well as it intrigues the customers. “It’s boring doing the same thing all the time. It’s dull eating the same thing all the time,” reasons Gielisse.

Practicing what he preaches, Gielisse constantly challenges himself. Perfecting his technique and developing winning recipes such as three-nut-crusted pork tenderloin with green apple-tomatillo vinaigrette, and Texas Gulf pompano with tomato chutney and corn pudding (for which he was named Seafood Chef of the Year), requires him to be constantly creative. Competing is not mere culinary machismo but the way Gielisse keeps his edge, which can be softened by a ninety-hour workweek. Kathryn explains: “Victor’s really competing with himself. He sets himself such high goals, but he never loses the excitement. When he’s developing a recipe, he’ll call me at home and say, ‘We’ve got it!’ and tell me all about what he tried first and how he arrived at the answer.”

“Every plate that leaves this kitchen goes through my hands. It can be exhausting,” Victor Gielisse says with a shrug and a grin. “But that’s part of it. You just have to love to cook to do it.”

This recipe uses several techniques to enhance the pork’s mild flavor-a strong marinade, grilling, and quick cooking. The lentil compote is a variation on a childhood dish-stewed lentils.