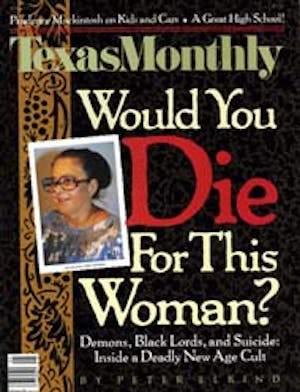 “We do not serve Tex-Mex food here,” Michel Clabaut says haughtily. The blond 46-year-old Frenchman is standing behind the bar at Plein Sud, his restaurant near Paris’ trendy Marais district, gesturing toward his menu, which lists nachos, chili con carne, frozen margaritas, and fajitas. He rinses a wine glass and continues pontificating on international cuisine. “There are three great world cuisines—French, Chinese, and Mexican. Tex-Mex is merely an interpretation. We serve only the authentic food of Mexico,” Clabaut insists. Impressive. And wrong, of course, dead wrong.

France—home of foie gras and chateaubriand—is making a fool of itself over fajitas and chili, and the young upscale customers that the French call les yuppies are the ones most responsible for the craze. Paris alone has seen at least thirty Mexican restaurants open in the past three years. The craze for hot salsa and cold cerveza has spread as far as Lyons, Marseilles, and half a dozen other French cities.

All of this would be cause for celebration except that the French are pretending that their shopgirl infatuation is some kind of magnificent obsession. They are busy convincing each other that they are eating authentique Mexican food, when what they are really lusting after is Tex-Mex. It’s the Great Parisian Chili Scam. But most customers don’t know the different; they just want more guacamole. In the restaurants, which typically have French owners and Mexican kitchen staffs, you can spot the first-timers asking the waitress for instructions on proper tortillas usage and eating their tacos with a fork.

Why do restaurants from Montmartre to Montparnasse insist that they are serving “Mexican” food? Plain snobbery is one reason. The Marlboro-smoking, Levi’s-wearing, Madonna-crazy, Miami Vice-watching French are often loath to admit their addiction to American pop culture. Too sophisticated to eat our food, they look for a politically correct, back-to-basics cuisine, preferably available for less than 100 francs ($20) a head.

Beyond that, chalk it up to a general craze for things Latin American. The French are more interested in Mexico now than at any time since Napoléon III installed his man Maximilian on the Mexican throne. In design, couture, music, and vacations, as well as food, Latin America is hot. “C’est la mode,” says restaurateurs with a shrug.

The food at Plein Sud (which roughly translates as “way south”), at 10 Rue Saint-Merri, is very pricey, and from the tepid salsa to the soggy enchiladas, offers little to tempt the tourist’s palate (unless it’s the chocolate mousse and Irish coffee). It would be sad indeed if this was all Paris has to offer, but fortunately, there is more.

The standard for Tex-Mex in the city is set by the city’s oldest Mexican joint, the Studio, at 41 Rue du Temple. The restaurant, marked by a faded sign depicting a desperado, lies down a narrow street from the Centre Georges Pompidou, in a courtyard surrounded by working dance studios. The Studio is a godsend for those in need of a booster shot of real Texana. All of the servers speak English. It’s decorated with the Lone Star and U.S. flags, a buffalo head, old Texas license plates, and the obligatory “Don’t Mess With Texas” bumper sticker. Unlike many of Paris’ Mexican spots, it draws a high percentage of Americans, many of them regulars who come to savor the taped rock and country music and soak up the honky-tonk atmosphere. Manager Claude Denayon, whose father is French and mother is American, grew up in San Francisco and worked in the food business in the area. A soft-spoken sort, Denayon, 31, also spent a lot of time in Austin, hanging out with musician friends; he names Julio’s in that city as his favorite restaurant.

The portions at the Studio are large, the food tasty, fresh, and well prepared, certainly better than the mass-produced yuppie chow passed off on New Yorkers as Mexican food. The chicken burrito I tried was well stuffed with shredded chicken that had the proper grease quotient (it’s not Tex-Mex without it), and the corn tortilla would have passed muster in Monterrey. One big difference across the Atlantic: Things are not as spicy as they are in the States. Denayon says, “I personally don’t think it’s real chili unless you sweat while you eat it,” but he had to bow to local tastes. The salsa, though, is respectably picante. The Studio isn’t cheap. Dinner for one, with no more beer than absolutely necessary, can easily run $25. Still, that’s less expensive than a plane ticket to Texas, and Ninfa’s doesn’t’ deliver to Paris.

Another good, unabashedly Tex-Mex menu can be found at Susan’s Place, at 51 Rue des Ecoles in the Latin Quarter. The twist is that Susan—she goes by one name, like Cher or Madonna—is a Frenchwoman who has never been to Texas or Mexico, speaks no anglais, and had never run a restaurant before opening this one. Not a promising résumé.

She did, however, have the good sense to team up with 28-year-old Nahum Beristain, a talented chef of Mexican-Jewish heritage who learned his way around a kitchen at the late, lamented Mario’s in San Antonio. (After working with Susan, Beristain helped Mario Cantú open a restaurant named Inca Maya; it is a South American-oriented successor to Mario’s first but now defunct Parisian outpost, Papa Maya.) Susan’s Place cooks up fajitas (over imported mesquite, of course) that are absolutely correct: lightly singed on the outside, tender, and served on a sizzling platter. Susan’s top-drawer chili won a recent Paris cookoff—that may seem like winning a clambake in Kansas, but the stuff is good in any language. Dixie beer is available, and Lone Star should be soon. Susan’s Place, which has menus in English and Old Glory on the wall, is comparable in price to the Studio.

At the other end of the spectrum form the gung-ho purveyors of Tex-Mex are some very fine restaurants that serve a type of food that has been, in general, overlooked by the margarita-happy yuppies. And just exactly what is this mysterious cuisine? Funny you should ask. It’s Mexican food—not sizzling fajita platters or “Macho Nachos” but the simple country cooking of Mexico: pork and beef stews, real corn tortillas, excellent chicken mole, and cold Mexican beer.

It makes sense, really, that more discerning palates would adopt the real thing. These folks are no rubes when it comes to eating. Their own culinary tradition is rightfully ballyhooed (just don’t mention its historic origins in northern Italy to a Frenchman, unless you are trying to change the subject from the true genius of Jerry Lewis, a fact recognized by the French Legion of Honor), and the French have eagerly accepted a variety of foreign cuisines. Mexican food was a logical next step.

One of the best of these genuine Mexican places—despite a name that screams “fast food” to an American—is Taco Loco, at 25 Rue J. P. Timbaud in a rapidly gentrifying area between Place de la République and the Bastille. Opened four years ago by French and Mexican partners, Taco Loco has grown from a hole-in-the-wall operation with three tables to a snug little restaurant that packs in the crowds at lunch and dinner. The comparatively spacious new place seats thirty, if you include the counter seats. The decor is bright and festive, with the usual Mexican beer posters and obligatory black and white photographs of bandidos, and by eight-thirty, when the French are ready for dinner, there is usually a line of hungry people outside.

For 33 francs (about $6), I got a platter large enough for most appetites. The chicken in Taco Loco’s mole poblano (which comes with rice and salad) was dark and smooth and decidedly nostalgic, though the locals were freaked out by the very idea of chocolate in a sauce meant to go on meat. The 43-franc special provides enough food to feed Santa Anna’s army. Cerveza costs 16 francs, but not all of the French have figured out the natural link between beer and Mexican food; you can see them drinking red wine with dinner, followed by tequila.

Along with such places as México Mágico and Pancho Villa, Taco Loco represents a trend within a trend: honest ethnic fare in a restaurant scene full of hype and imitation. But such authenticity isn’t for everyone. As he polishes off a plate of picadillo at Taco Loco, Raphael, a twenty-year-old West German studying in Paris, demands to know, “That was good, but why don’t they serve nachos here? Or chili? I like the real stuff better.”