As if Whataburger wasn’t populist enough already—every Texan’s favorite fast food chain is now striking a blow on behalf of every working stiff who has been subject to excessive and repeated calls from an immense collection agency.

As Patrick Danner of the San Antonio Express-News and the Houston Chronicle first reported:

Exasperated officials at the San Antonio-based burger chain have gone to court in an attempt to stop persistent collections calls made to its corporate headquarters to get an unidentified employee to pay up on a debt allegedly owed.

Whataburger last week sued NCO Financial Systems Inc., saying the collection efforts of one of the nation’s largest debt collectors “amount to a campaign of harassment against Whataburger that is unreasonable … and reckless.”

NCO’s “disruptive conduct causes phone lines to ring, keeping the phone lines as well as Whataburger employees occupied and prohibiting (them) from performing their respective duties,” the suit claims.

“What’s that, you say?,” wrote Mary Beth Quirk of the Consumerist. “It’s weird that a corporation would be defending its employee? …Debt collectors know where you work, so companies will go after people there in an effort to tick off employers enough that the individual will pay up to make the calls stop.”

If you are an everyday American consumer and get a hankering for  fast food, you might want to consider a run to your local Whataburger. The Texas-based company deserves your support for its willingness to stand up to one of the biggest bullies in the debt-collection industry. In fact, this debt collector is even bigger than most Americans realize because, unbeknownst to many, it is owned by a banking behemoth.

Shuler, who had his own personal experience with NCO, goes on to explain NCO’s ties to JP Morgan Chase. He concluded, “That means Whataburger, on behalf of an employee, is taking on the largest private corporation in the world. I know who I will be rooting for in that fight.”

As Danner reported, NCO has undergone its share of scrutiny, including a recent settlement with nineteen state attorney generals. Texax was not in that group, but, Danner reported:

In 2008, NCO resolved an enforcement action brought by the state over charges the company “unlawfully made harassing and threatening phone calls to purported debtors,” according to a statement from the attorney general’s office.

NCO agreed to set up a three-year, $150,000 restitution fund to compensate Texans harmed by its business practices. It also agreed spend $300,000 to monitor its collection practices for three years. 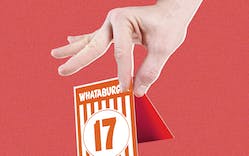