Few Texas brands elicit as much fanatical loyalty as the blazing orange-and-white Whataburger logo, so when there’s an opportunity to score some rare company swag, Texans tend to go a little nuts.

Such was the case over the weekend on Houston’s Reddit page, which was home to not one but two popular posts about the pop-up Whataburger swag boutique at the WhataGames corporate shindig, held at the Bayou City’s George R. Brown Convention Center.

Every two years, the WhataGames event pits the restaurant’s locations against one another in speed, accuracy, and efficiency. Cooks and cashiers (the infantry of the Whataburger army) compete in one division, while the unseen rear echelon personnel (support troops who fix and maintain the grills, ovens, and fryers) duke it out in another.

Twenty-two finalist teams spanning Whataburger’s fifteen-state geographic footprint competed in the finals this year. The 2019 WhataGames gold medalist in the restaurant division is the East Stacy Drive location in Allen, with each crew member from that team winning $5,000.

The skills challenges were held in closed-down Whataburgers; fake customers placed the orders. Many of them were “that guy”—the one who wants his fries with no salt or his tomato diced instead of sliced or some-such. These customers offered the ultimate test, one only the orangest of the orange can pass.

The rest of the three-day event took place at a convention center, where Whataburger employees faced off in wackier competitions, like tossing giant dice and a Whataburger history- and culture-themed quiz show. Between those shenanigans and periodic speaker sessions, the employees (and their family members) could buy what was meant to be exclusive Whataburger swag from the pop-up shop. (Various Whataburger-themed merchandise has been offered at previous iterations of the competition.)

Apparently, word of the exclusivity did not trickle down to the folks manning the shop: anyone who found their way in was able to buy what they wished.

One such non-affiliated buyer was Mike Cruz. A contractor who helped set up the WhataGames event for the venue, he stumbled into the pop-up shop on a break.

“I bought nine pairs of shoes,” Cruz said. “And some other stuff. Like some hat pins and my backpack. That pack is so cool. I mean, supercool.”

Cruz, who sets up many events, was impressed with both the merchandise and the production values: lights, a sound system, smoke, and lasers. “If there was any debate about In-N-Out versus Whataburger, I don’t have any now,” he said. “There is no way In-N-Out would ever have a weekend like this.”

After Cruz and another Redditor posted about their finds, a few other locals made it in and bought stuff too. One was David Do, who reports being floored by the sheer volume all the all-things-Whataburger swag on offer. “Welcome mats, battery packs, Yeti cups, pillows, shirts, jackets—you name it, they had it,” he said. 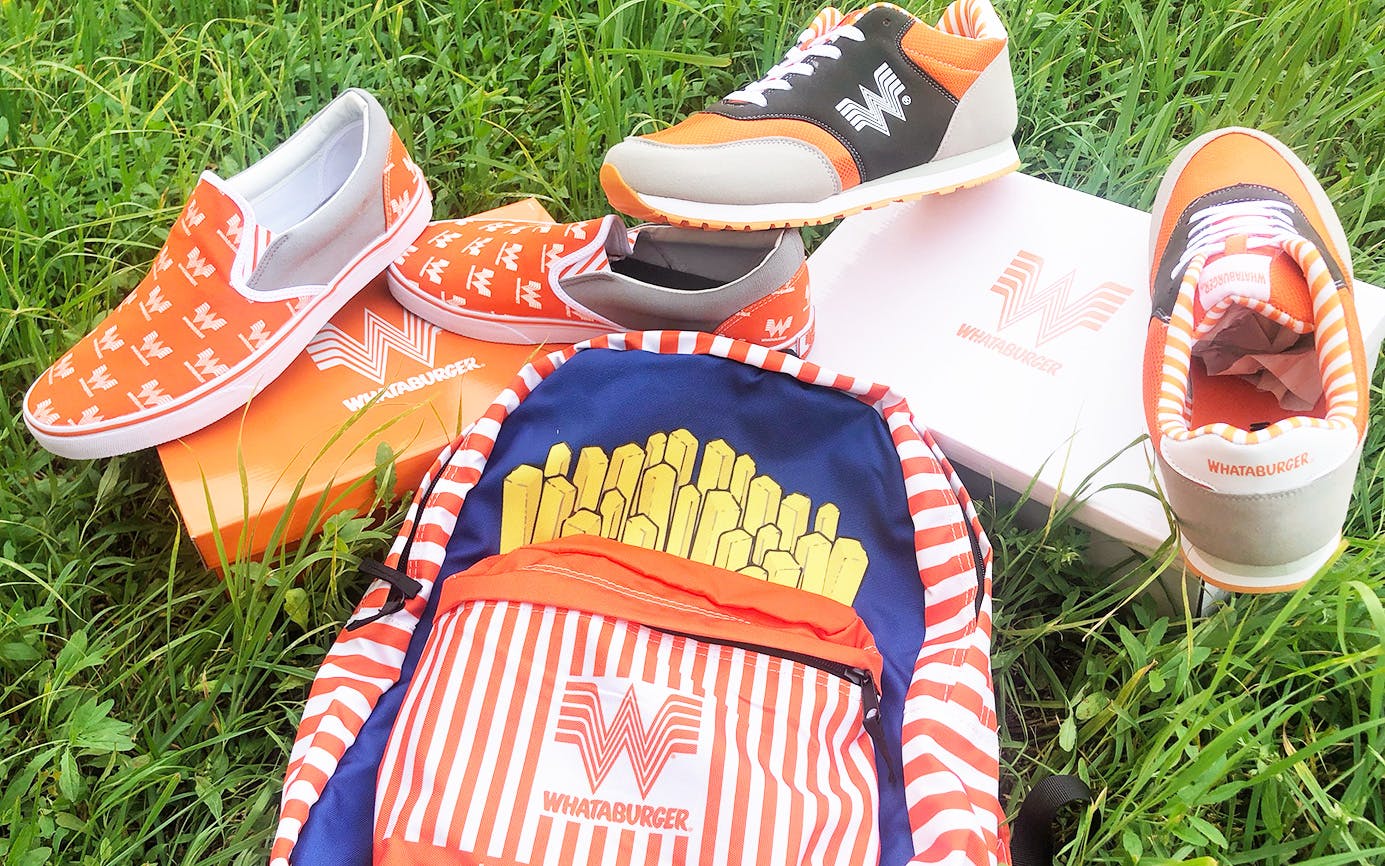 Sadly for the size 13 Cruz, he is unable to wear any of the shoes he bought, which are sizes 10, 11, and 12. He is selling them, but not at an outrageous mark-up. As a true WhataBeliever, he wants to share his wealth with his fellows fans on fair terms.

First priority, he says, is to fulfill the orders he has from places like Michigan, Colorado, and Missouri, where orange-and-white rooftops, jalapeño cheddar biscuits, and thick & hearty burgers are rare to non-existent. “I know they really don’t have a chance to go to Whataburger much and this will mean more to them,” he said. A similar generous impulse has prevented him from flipping his stash in bulk to a hoarder or reseller. “I’ve turned down one guy who wants to buy five pairs,” he said, explaining that he’d rather see more people get one pair apiece.

A rumor was circulating on Reddit that the very popular slip-on sneakers were exclusive to this event. Once this lot was gone, they were never to be sold again. That’s not true, according to a Whataburger spokesperson. Every item in the store will be available in the online Whatastore “soon.” Varying by style, the shoes will range from $35 to $45. They won’t be a rarest-of-rare one-off collector’s item, but instead soon available to anyone with a debit card, online access, and the sort of outgoing personality that enables one to rock blinding orange shoes in public.