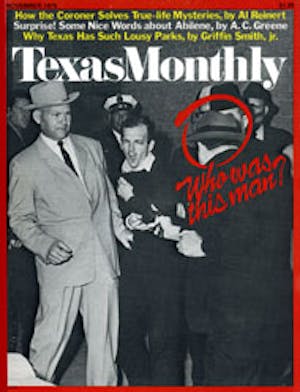 Henry VIII would eat hundreds at a single sitting. Casanova devoured 50 each evening to reap their legendary aphrodisiac effect. Like fine wines and cheeses, oysters have a mystique. They are consumed not so much to satisfy hunger as for the pure pleasure of eating them.

To the connoisseur, the ultimate oyster experience is to eat them while they are alive, with their gills still quivering. This ideal is difficult to achieve, however, unless you ship out on an oyster boat or know a very good oyster bar. The next best substitute is to get the very freshest you can and at the same time remain alert to the wily res­taurateur who tries to pawn off a shucked-in-Louisiana oyster as one shelled at his own place. Hence the first rule for the oysterphile: be wary.

Oysters are a type of mollusk found around the world, from Greenland and Scandinavia to Argentina and Australia. They prefer shallow inshore waters, where they rest serenely on the bottom or attach themselves to submerged ob­jects, such as other oyster shells, to form great reefs. Of the 100 or so species that have been identified, only ten have significant commercial importance, and in Texas only one, Crassostrea virginica, is marketable. Contrary to popular be­lief, edible oysters do not produce pearls of gem quality.

Eighty per cent of the oysters con­sumed in Texas are harvested by oyster fishermen from Galveston Bay. Un­shucked oysters are generally sacked and refrigerated (but not iced, as this will kill them) and flown or trucked to cities all over the state. An unopened oyster, which exists in something like suspended animation, can live for up to two weeks if the shell is kept moist with unchlorinated water. Shucked oysters are packed in their own thick juices in either glass or metal containers (glass is preferable) and iced to keep them fresh.

To tell whether the dozen plumply inviting raw oysters on your plate are genuinely fresh—that is, shucked on the premises—you can employ several techniques. If you are an expert, you can rely on your own taste buds. If you are an amateur, you can ask to visit the kitchen and see the shucker at work. (A good restaurant will never refuse this request.) Finally, you can order them unshucked, although be fore­warned that the inevitable results of un­tutored oyster shelling are mangled oysters and cut hands.

To shuck an oyster, hold a well-scrubbed shell, rounded side down, in a folded napkin or towel (to protect your hand), insert an oyster knife into the hinge or other convenient point of attack, and pry the mollusk open. With the knife, carefully detach the oyster from the top of the shell without cutting the flesh and discard the upper shell. Next detach the oyster from the bottom shell. You are now ready to eat the results. Try to avoid excessive chewing.

Having determined that your oysters are fresh, the next question is: Are they safe to eat? The oyster beds along the Texas coast are no longer as pristine as they once were, but standards for gathering and processing set by the U.S. Public Health Service and the Texas State Department of Health and en­forced by the Texas Parks and Wildlife Department are a pretty good guarantee that you won’t gobble down a polluted oyster. The outbreak of hepatitis in Houston in 1973 has been fairly con­clusively traced to a closed Louisiana oyster bed: black-market oysters, in other words.

What about the R months? According to popular myth, it is unsafe to eat an oyster during a month which does not have an R (i.e., during May, June, July, and August). The truth, however, is that oysters spawn during the summer and therefore tend to be soft and watery; unappetizing but certainly not dangerous. Oysters are at their best in Texas from November through April.

Because a sizeable oyster spat-fall (production of young oysters) occurred in Galveston Bay in June 1974, there should be a good crop this season. Here’s where to find them.

Austin. You can watch your order of raw oysters being freshly shucked at the Capital Oyster Co., 219 W. Fif­teenth. The flavor is excellent, the tex­ture good, and they are served with a full-bodied red sauce, lemon, and horseradish. We could only wish they were more thoroughly chilled. The best cooked oysters in town are to be had at the Old Vienna, 801 Rio Grande, where the chef himself may ceremoni­ously bring a steaming platter of oysters Bienville or Rockefeller to your table.

Corpus Christi. Corpus Christi Bay does not produce a marketable quantity of oysters, so restaurants get most of theirs elsewhere. The Black Diamond Oyster Bar, an unpretentious place at 5712 Gollihar, has the best in town.

Dallas. Dallasites repair to the Oys­ter House at 108 N. Akard for New Orleans oysters flown in fresh daily and shucked on the premises. Equally fresh New Orleans oysters, plus a great Rockefeller rendition, are available at the Oporto Oyster Bar and Seafood Restaurant, 2929 N. Henderson.

El Paso. Louisiana oysters dominate the scene here. You can get them on the half shell at The Wharf, 909 N. Mesa, where the decor and prices ($6.95 a dozen) are very uptown. We recom­mend you stick to steak in El Paso.

Fort Worth. All fresh oysters served in Fort Worth come from the same wholesaler, so it’s a matter of choosing your favorite restaurant. As Andy Warhol says, you go out to atmosphere these days anyway, not to eat.

Houston. Captain Benny’s Half Shell, 7409 Main, serves Long Island Sound oysters in the hot months, Mata­gorda Bay oysters the rest of the year. The former are salty, like the type from Chesapeake Bay; the latter are reputed­ly more tasty than the ubiquitous Galveston Bay oysters. San Jacinto Inn, near the San Jacinto monument, has acres of oysters on the half shell, and Brennan’s, 3300 Smith, serves forth very civilized versions of oysters Rockefeller and Bienville.

San Antonio. The dish Oysters Festival at The Kangaroo Court, 512 River Walk, includes a sampling of the tasty mollusks in a variety of guises (Rockefeller and so forth) and with a view of the river that can’t be beat.