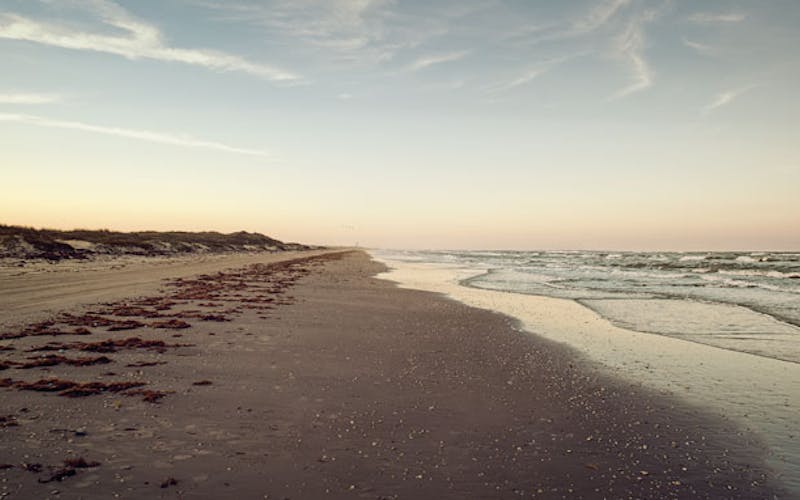 A sandy eight-mile beach on a narrow spit of arid land between the Rio Grande delta and the salt flats of the lower Laguna Madre, Boca Chica is the alpha and omega of Texas—the place where a once mighty river spills into the mightier Gulf, where the U.S. ends and Mexico begins, and where the high-rises of South Padre Island give way to an untamed, undeveloped coast. Protected by both state and federal authorities as part of the Lower Rio Grande Valley National Wildlife Refuge, this gloriously empty stretch of shore calls to anyone wanting to give civilization the slip.

That’s exactly what drew me as far east as I could go on Texas Highway 4. Just past the U.S. Border Patrol checkpoint, I was greeted by an old fuel tank with a spray-painted scrawl: “Boca Chica Village Welcomes You.” The depopulated village was as ghostly as the Civil War markers I’d seen along the road, and I continued driving past the windswept grasslands and tidal inlets until the pavement ended at a break in the dunes. Except for the brown pelicans skimming the breakers and the red knots hunting the tide line for a meal, the beach was desolate. I turned south onto the sand, following a multitude of tire tracks about three miles to the “small mouth” of the Rio Grande.

When I visited Boca Chica back in 2001, the river was a mere trickle. A few months later, it halted at a sandbar that had formed at its mouth and made national headlines. But lately things have improved. “In 2010 Falcon Dam was at capacity, and Mexico had major tropical storms,” said Bryan Winton, the manager at the Rio Grande Valley refuge. “With that dam release, we saw significant flooding. We have had no sizable rainfall since then, but we have farmers that need freshwater, so the river is still flowing.”

The mouth of the river makes a fine place for a short hike. I got out of my car and explored the shell-specked sand, relieved to see a thirty-foot-wide inlet, its dark green water flashing occasional whitecaps, that offered a glimpse upstream. Patches of prickly pear and yucca hunched behind the dunes, and across the way, a lighthouse stood sentinel over the sands of Matamoros. I caught sight of a juvenile green turtle lying dead in a mat of sargassum weed and was filled with dismay, but I reminded myself that the five species of sea turtle known to breed in Texas would soon begin nesting nearby. Another end, another beginning.

To get there: Boca Chica is always open. Drive 23 miles east on Texas Highway 4 from Brownsville; the road dead-ends at the beach. There are no services, so you’ll need to bring your own food, water, and surfboard. Camping is not allowed.