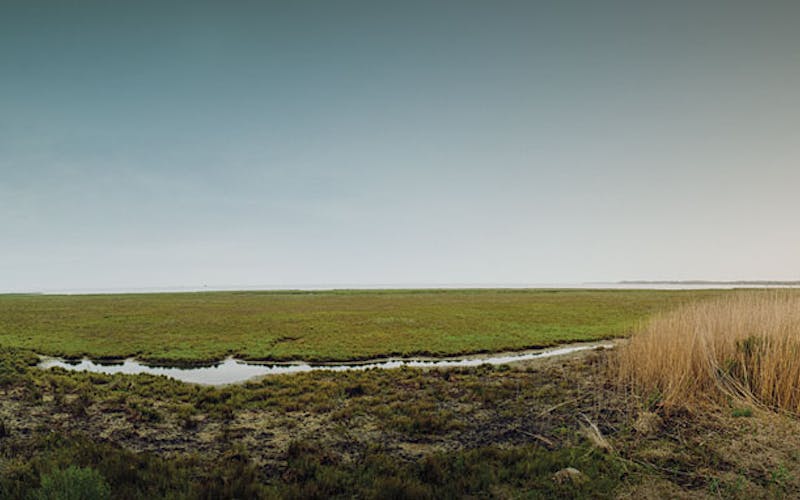 The view from a trail at Aransas National Wildlife Refuge.
Justin Carrasquillo

The 115,931-acre wildlife refuge in Aransas is best known as a stronghold for the endangered whooping crane, the tallest bird native to North America, which frequents the area from late November to April and attracts charter boats full of gawking visitors out of Rockport and Port Aransas. But the sanctuary is an oasis for all sorts of other wildlife too—more than four hundred species of birds; a multitude of butterflies; mammals such as the badger, bobcat, and black-tailed jackrabbit; thirty-odd species of snake—and though access is restricted, you can escape into its dense woods and quiet swamps by taking a sixteen-mile self-guided drive and several short hikes.

So hike I did, setting out first on the mellow trail to Dagger Point, a rare hill that offers broad views of San Antonio Bay. As I climbed, bird songs filled the surrounding forest of evergreen red bay, mature live oak, and hearty blackjack oak. Sparrows, cardinals, and yellow-rumped warblers bopped through the underbrush. Soon I’d arrived at a natural terrace, a mere 25 feet above sea level, where the empty horizon—no buildings, no power lines, no drilling platforms—left me weak in the knees, with what I could only guess was a case of coastal vertigo. I didn’t see any cranes, but the vista made me want to whoop it up anyway.

Of course, I couldn’t leave without seeing the famous birds, so I hopped aboard Captain Tommy Moore’s Skimmer, a shallow-bottomed, 37-person cruiser that’s part of the Rockport Birding and Kayak Adventures fleet. (The Skimmer runs as often as twice a day during crane season; in the summer, Moore offers dolphin-watching and sunset cruises.) The crew cautioned us to lower our voices as we navigated the barrier islands along Blackjack Peninsula and the southwest end of Matagorda Island. Soon the cranes came into view, and as we got close, I marveled at their striking height (they can grow to be five feet tall), spectacular white plumage, and red crowns. We watched as pairs, and the occasional trio, hunted blue crab and other morsels in the brackish marshes, moving with the grace of ballerinas. Since receiving federal protection in 1967, the number of wild cranes has rebounded from less than twenty to nearly three hundred, a symbol of hope for conservationists.

“People complain that you can’t drive all over the refuge,” noted Jay Tarkington, our skipper on the Skimmer that day. “But this is one of the few places where the coast is still untouched. I remind them that this is a preserve for the wildlife. When you live in Texas, it’s easy to forget that these wide-open spaces are something not everyone has.” Amen.