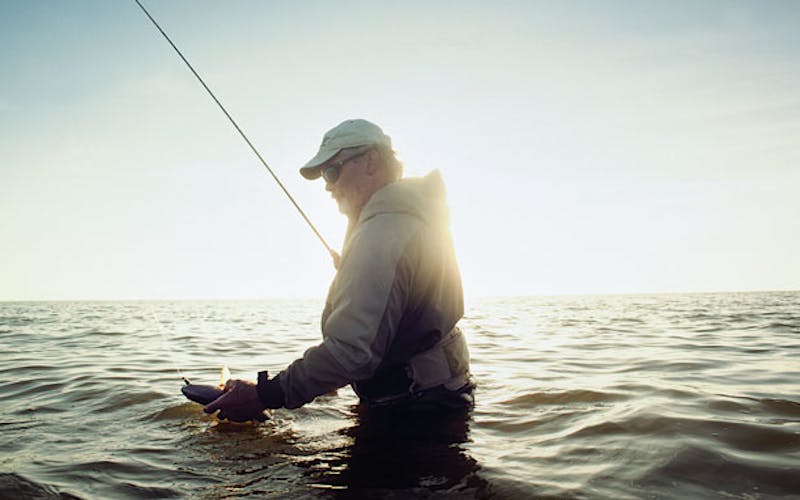 Baffin Bay, which bridges Kleberg and Kenedy counties, looks in aerial photos like the monstrous claw print of a fish eagle: from the heart of this one-hundred-or-so-square-mile expanse, the waters of Laguna Salada, Cayo del Grullo, and Alazan Bay extend out like talons. At sea level, Baffin Bay is even more striking, reaching across sea grass and mudflats to the far confines of the horizon. Its shores skirt private land, including the Kenedy and King ranches, which means that the coastline here is nearly untouched, making it an astonishing haven for wildlife, from endangered piping plovers and threatened reddish egrets to javelinas and coyotes.

Beneath the bay’s placid surface lie serpulid reefs (rock formations left behind by prehistoric worms), which can wreck your prop and leave you stranded, so it’s best to venture out with an expert. I found myself standing one hazy dawn on the prow of a custom Ibis shallow-water boat driven by Sally Black, one of the top hunting and fishing guides in South Texas. Captain Sally and her husband, Aubrey, run Baffin Bay Rod and Gun, and they spend more than two hundred days on these waters each year, steering clients to trophy trout, which grow to epic proportions here. The two call Baffin Bay “the last best place,” and as we cruised up the shores of Kenedy Ranch, the scene before us amounted to nothing less than a Texas safari: Rio Grande tom turkeys strutted about with fanned tail feathers, whitetail bucks shook their antlers in mock mating displays, and a few free-roaming nilgai browsed the coastal plain (these white-throated antelope were first imported as game on King Ranch and now number in the tens of thousands). Beyond the woody brush, on a low ridge, a forest of 260-foot windmills towered above the oaks and the mesquite, their blades churning in the breeze.

There’s no such thing as half a day on Baffin Bay; we covered at least eighty miles over eight hours, cruising past the Intracoastal Waterway and the floating cabins to the upper Laguna Madre, checking out the bay-side beaches of Padre Island. In addition to chasing trophy trout and sight-casting for redfish and black drum, the Blacks arrange duck-hunting expeditions and specialized cast-and-blast trips. Though I’d brought a rod with me, I wasn’t looking for blood sport that day and never boated a fish. Breathing the clean salt air was enough.

To get there: Kaufer-Hubert Memorial Park, 11 miles south of Kingsville on Interstate 77, near the village of riviera, has public boat ramps to access Baffin Bay; you can also reach the bay by launching at Bird Island Basin, on Padre Island National Seashore, and crossing the upper Laguna Madre. There are a few guides out of Corpus Christi, but the local Riviera guides offer the best rates, including Baffin Bay Rod and Gun (baffinbayrodandgun.com, 361-557-0090 or 361-205-0624), Cast ’n Stay (castnstay.com, 361-297-5636), and Baffin Bay Adventures (baffinbayadventures.com, 361-688-1750).