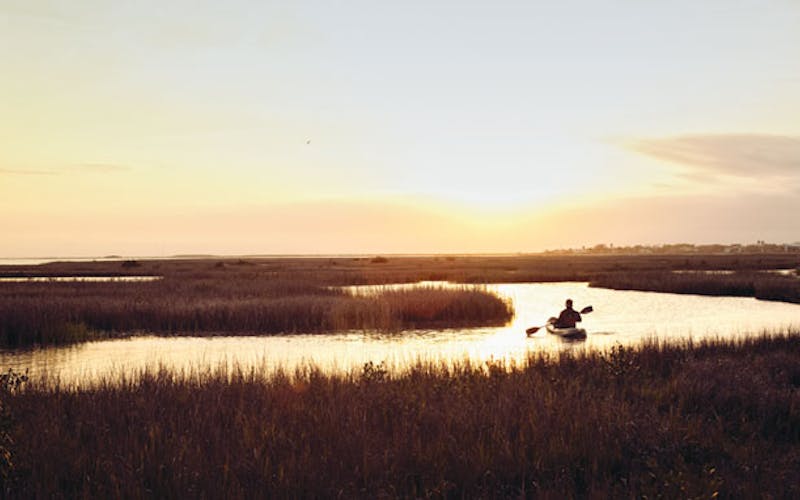 As I launched my kayak into the water near the ruins of Indianola’s old city hall, I couldn’t escape the irony that the approximately three-mile “beginner loop” on Powderhorn Lake was named for Robert de La Salle, the French explorer who managed to navigate the Mississippi from the upper Midwest to the Gulf of Mexico, in 1682, but was then shipwrecked in Matagorda Bay two years later and killed shortly thereafter. I’d already noticed an art deco–style granite statue commemorating La Salle nearby, which seemed fitting since the once historic port—now a settlement of beach houses, fish camps, and a rustic marina—is known for having experienced disaster itself through a series of hurricanes, storms, fires, and floods.

But as I dipped my paddle, my anxieties about the past were swept away. A breeze stirred the spartina, and I saw a bottlenose dolphin surface close by. On warm-weather weekends, Indianola fills with crowds eager to fish and drink—and drink and fish—but on this day it was empty. Not that crowds would have mattered: the easy trail, it turned out, can be extended to almost a dozen miles without overwhelming even the novice paddler. After crossing a pair of shallow oyster reefs, I discovered a trove of potential fishing holes and a flock of snow geese. Indianola and La Salle may have faced their share of tragedy, but I’d consider washing ashore at Powderhorn Lake a happy accident.

To get there: Indianola is about 15 miles from Port Lavaca. Head south on Texas Highway 238 to Texas Highway 316, which turns into South Ocean Drive and takes you to the marina. The paddling kiosk with trail information is opposite the La Salle Monument, about a mile north of town.