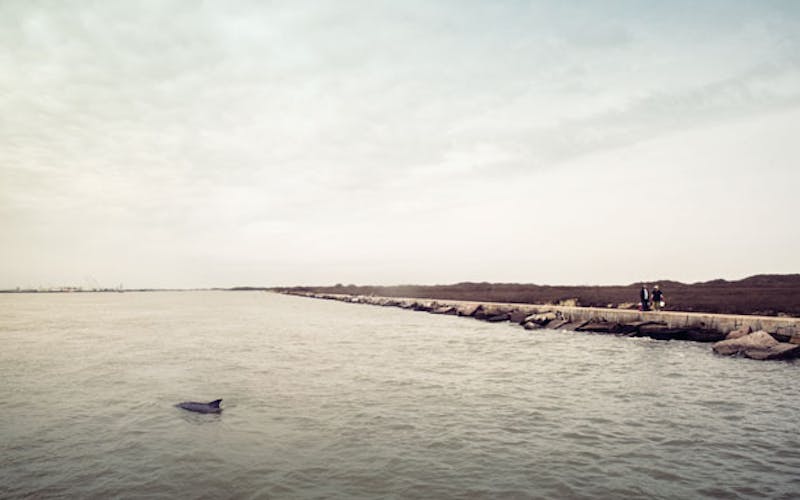 Fish the Gulf enough and sooner or later you’ll have a Hemingway moment. Mine came on the shores of San Jose Island, popularly known as St. Jo, a 21-mile privately owned island across the ship canal from Port Aransas that is open to beachcombers, anglers, and campers. As the sun began its descent, terns dive-bombing bait fish along the boulders of the island’s jetty enticed me to take a chance. Casting a small lure, I felt a big bump and eagerly set the hook. My reel screamed as the behemoth headed out to sea. Not knowing whether it was a shark, a king mackerel, or what, I found my line unspooling at an alarming rate—and with it everything in my brain but the desire to land the fish. I lacked a suitable net, and my rod was going to snap like kindling if I hoisted the giant with it, so I stepped into the slippery wash and was summarily drenched by a wave. Finally, after much work, I was able to lift an enormous bull redfish—about four feet long and more than forty pounds—out of the water.

Heart pounding, alone, I realized this must be how people drown on jetties. With quivering arms, I cradled the fish to remove my hook, then released it in the surf, where it righted itself and swam away. Back on the secluded beach, I set up my tent and opened a beer I’d sequestered in my pack for just this moment. Perhaps I would sleep as deeply as the old man Santiago.

To get there: San Jose is just north of Port Aransas and accessible only by boat; a passenger ferry known as the Jetty Boat leaves hourly beginning at 7 a.m. from Fisherman’s Wharf in Port Aransas (jettyboat.net, 361-749-5448). The ferry ride is $12. There are no services on the island.