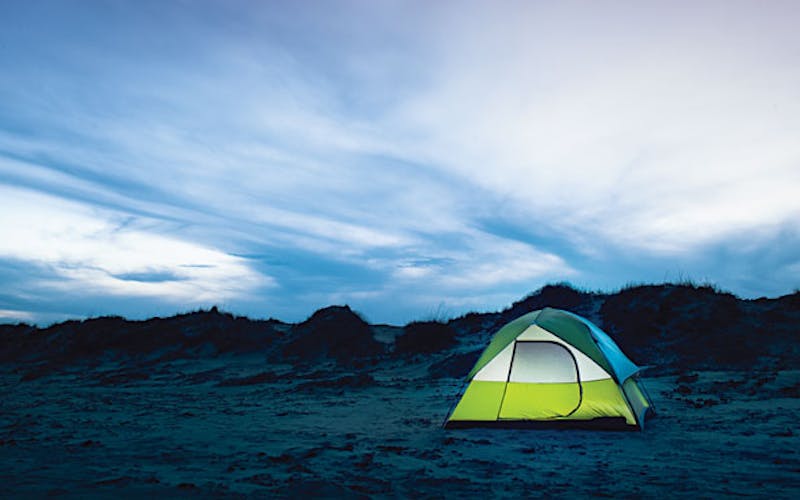 If the general lack of 24-karat ocean beaches in Texas makes you despair, then Padre Island National Seashore will restore hope. Flanked by the Gulf to the east and Laguna Madre to the west, Padre Island is the longest undeveloped barrier island not only in Texas but in the whole world. And unlike South Padre Island just below it, with its glut of trinket shops, towering resorts, and shot bars, these sands offer a seclusion rivaled only by the backcountry in Big Bend.

But you have to know where to go. The North and Malaquite beaches are popular with shell-seekers, birders, and surf anglers, while Bird Island Basin, on the bay side, is one of the nation’s top windsurfing spots (you can rent windsurfing gear and kayaks and take lessons right on the beach at Worldwinds). To get away from it all, you can camp on the island’s empty southern beaches, as I did. But first, arriving at night, I stopped at the comfortable campground at Malaquite Beach. Named after a long-forgotten Coahuiltecan tribe, the beach is now famous for its sea turtle hatchling program; between June and August, hundreds of baby turtles are released to much fanfare in front of the Malaquite Visitor Center. The eggs were still being incubated during my visit, so after a restful night accompanied by the sound of the breakers, I broke camp and immediately steered south on the park’s only road, away from the people and the pavement.

I’d planned to drive the fifteen miles to Yarborough Pass, on the upper Laguna Madre, but most of Padre Island is accessible only by four-wheel-drive vehicle, and I didn’t have one. So I simply drove until I could see no sign of anyone—and then drove a mile farther. After I set up my tent on South Beach, about six miles from the end of the road, the night brought unexpectedly high winds. The advantage of these gusts was that the clouds cleared to reveal the stars. I gazed up at the seven sisters of the Pleiades and Orion unsheathing his sword. The disadvantage? Sand—not just around my tent but also inside it, forcing me to close the flaps.

The cool morning revealed a beach decorated with the translucent, sail-like bubbles of Portuguese man-of-wars that had washed ashore. Fantastic to look at, and often mistaken for jellyfish, a man-of-war is actually a colony of distinct organisms, and those that form the tentacles pack a nasty sting. I sipped my coffee and kept my hands to myself.

To get there: Padre Island National Seashore is always open. From Corpus Christi, take Texas Highway 358 across the JFK Causeway until it becomes Park Road 22. Continue about 10 miles to park headquarters (361-949-8068). Entrance fee is $10, good for 7 days; additional day-use fee for Bird Island Basin is $5. Camping at Malaquite Beach costs $8 a night; the sea turtle hatchling hotline is 361-949-7163. Primitive camping (free) is allowed on North Beach, Yarborough Pass, South Beach, and anywhere south of there. All sites have a 14-day limit.