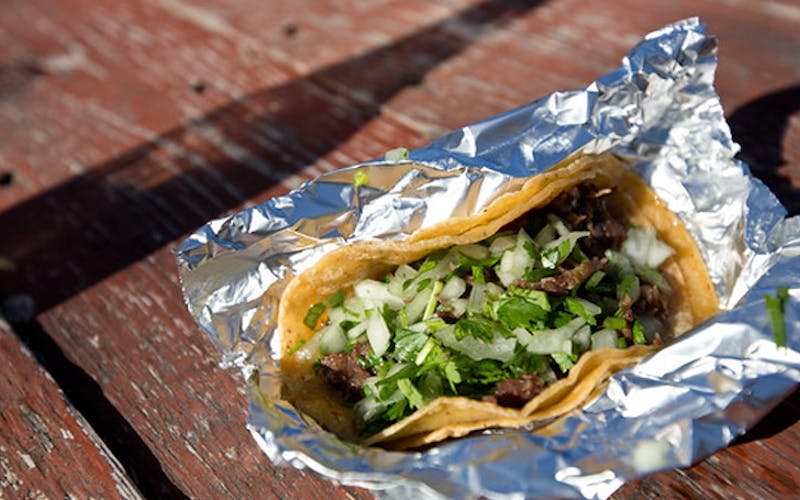 Many of Austin’s best trailers look as though they’re held together merely by the kitchen’s good intentions. Las Trancas marks the exception. It’s a gleaming, oversized beacon of spotless white on Cesar Chavez, with air-conditioning and a fancy drink cooler built into the back corner. The trailer works in the Mexico City street taco style—most tacos are $1.50, but portions are small, so order at least two. On a recent Sunday, Spanish was the only language flowing from the guests at the two picnic tables, and business was buzzing. After consulting the menu and the kitchen, we stuck mostly to the standard items here: carne asada, pastor, and pollo. When we added a cabeza—beef cheek—at the end, the order was met with a long, soulful nod from the man at the counter, as though we’d given the correct password. The small but dense beef cheek taco was served shredded and braised on a pair of compact homemade corn tortillas. A light sprinkle of cilantro and finely diced raw onion sat atop the tiny gut bomb. The taco tasted like amplified barbacoa: a touch greasy but also earthy and bold. A dash of tomatillo salsa and a squeeze of lime proved essential in balancing and brightening the weighty beef. Top Chef fans, take note: Paul Qui is a regular here and often recommends the trailer to visitors.