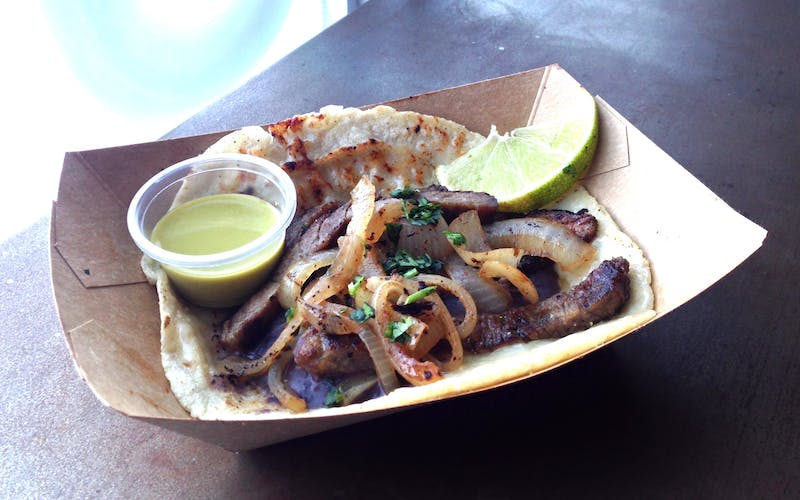 Any Burnet Road taco crawl demands a stop at Taco Flats, if only to pay homage to the long-gone scruffy original bar named Taco Flats that once graced North Lamar. Open since October 2014, with the permission of Taco Flats former co-owner Linda Steele, the new TF is a small neighborhood sports bar that sells cocktails, craft beers, wine on tap, and what owner Simon Madera calls gourmet tacos. The term translates to Mexican ideas adapted for the Austin market (e.g., two tacos are named El Hippie and the Austinite, and you can opt for the taco to be served on a thin slice of jicama instead of a tortilla). Most of the dozen tacos on the menu are familiar and tasty enough—pastor, pollo asado, carnitas. But one stands above the rest, and that is the Pirata—the Pirate. It’s utter simplicity, with beef fajitas with refried black beans, but the meat is amply seasoned and tender, the black beans are garlicky perfection, and whether you choose a corn or flour tortilla it will be house-made. With grilled onions and cilantro as a garnish, it’s the largest and most expensive taco on the menu ($5.50) but well worth the investment. (Allegedly it comes with jack cheese, but ours had none and didn’t need it. Nor did it need any extras, which was good, because there is only one salsa—a smooth jalapeño–green tomato.) The room, with its long pine communal tables, colorful horizontal paneling, and raw wood accents, is agreeable, but you’d better like sports, because there are at least half a dozen flat-screens, and the game is on!