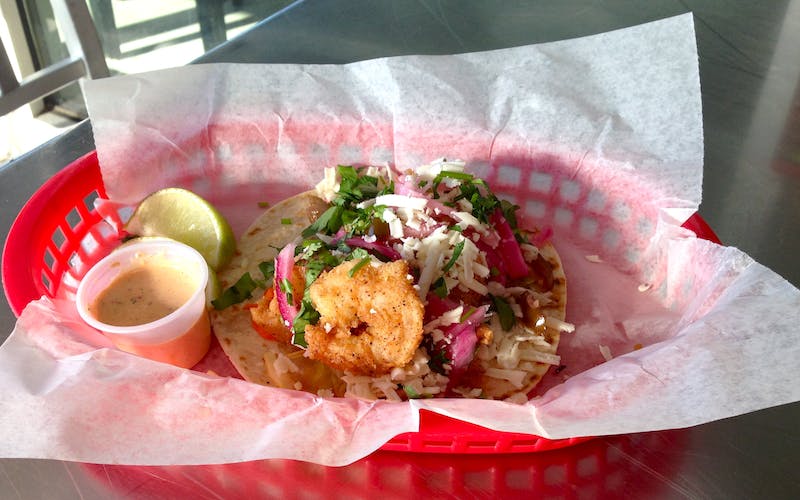 Another day, another Torchy’s. Back in 2006, Torchy’s was a single trailer. But with crazy expansion now resulting in nearly thirty outlets, the Texas chain’s amped-up, highly Americanized tacos have spread to the Dallas, Fort Worth, and Houston urban areas, as well as to smaller cities like Lubbock, Amarillo, College Station, and Waco. The company is even planning a move on San Antonio. (Good luck with that. San Antonioans have their own ideas about “foreign” tacos and especially chains that don’t use house-made tortillas.) The Burnet Road location in Austin, open since fall 2010, sums up the usual praise and gripes: the flavors generally rock, but the assembly is often slap-dash. In particular it drives a lot of people crazy that they overfill the tacos. (One solution to avoid a collapse is to order extra tortillas and divide the filling.) Another gripe: The corn tortillas are a shreddy mess and the flour ones are ordinary and commercial. That said, of the six breakfast and fourteen regular tacos, the Baja Shrimp is a favorite. The small—yet not tiny—shrimp—are very fresh, well seasoned, and hand-breaded. There’s cabbage slaw, topped with pickled jalapeños and red onions, a sprinkling of queso fresco, cilantro, and a lime wedge on the side. A pureed chipotle sauce comes along too. The ultimate effect is dynamite.