No. 4 Texas Wine in the Champion Wine Garden 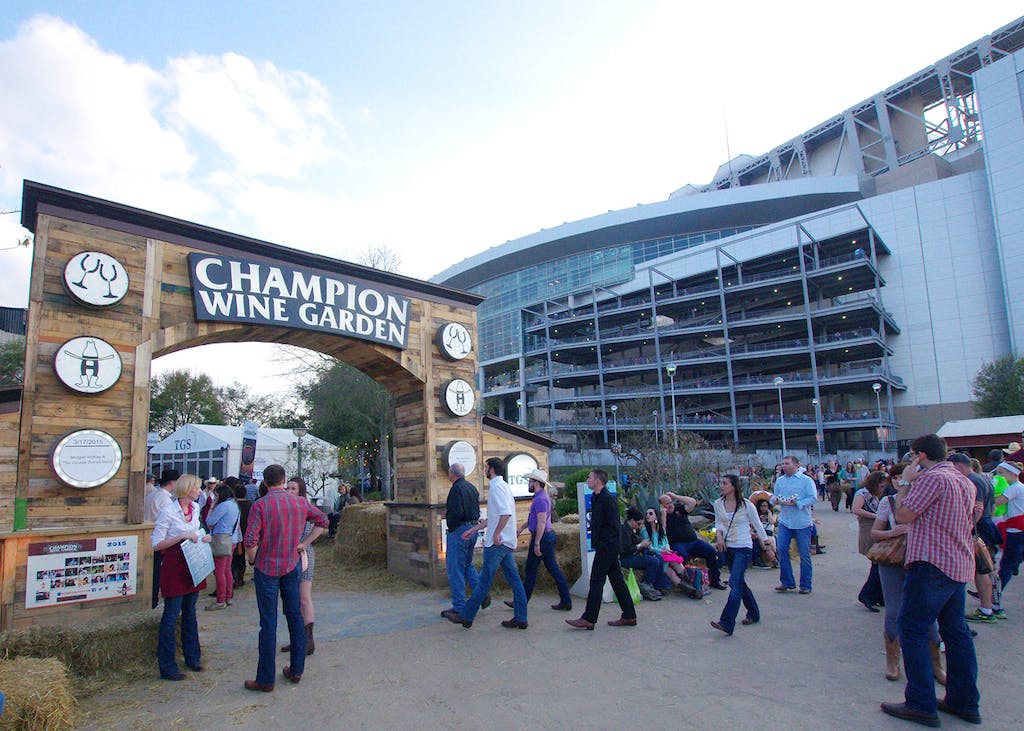 If you’re looking for somewhere to relax during the Houston Livestock Show and Rodeo™, look no further than the Champion Wine Garden located in Carruth Plaza. Nestled between NRG Astrodome and NRG Stadium, Carruth Plaza is a tribute to the Show and Texas’ Western heritage.

The plaza’s namesake, Allen H. “Buddy” Carruth, is best known around the Houston community for his philanthropic work with The Wortham Foundation and long-time dedication to the Show, including serving as past president and chairman of the board. Thanks to a grant from The Wortham Foundation, Carruth Plaza has evolved into a tranquil oasis offering Show visitors a place to recharge throughout the three-week agricultural fair and exposition.

A diverse assortment of Texas native plants, including cactus, yucca and Live Oak trees, along with eight, large-scale bronze statues — many sculpted by Houston artists — are placed around a soothing stream, allowing for maximum relaxation. During the Show, this Western art sculpture garden is home to live music, dancing and champion wines from the Rodeo Uncorked! International Wine Competition.

The 2017 Rodeo Uncorked! International Wine Competition boasted 2,850 entries from nearly 20 different countries and an additional 105 entries from the featured region, Tuscany. Texas wineries were well represented in the competition with 351 entries. One wine stood out from the rest and took home the title of Top Texas Wine — Perdenales Cellars Tempranillo, Texas High Plains, 2014. Kiepersol Vineyards & Winery, the Top Texas Winery, is located on the outskirts of Tyler, Texas.

Houstonians will have the opportunity to sample the winning Texas wines, along with the remaining Rodeo Uncorked! International Wine Competition champions, daily during the Show in the Champion Wine Garden. Bottles and glasses will be sold starting at 4 p.m. Monday – Friday, 11 a.m. on Saturday, and noon on Sunday, March 7–26.

Everything’s bigger in Texas, including wine production. On Thursday, March 9, the Show will celebrate Texas’ rich contribution to wine production in the United States. Texas is currently ranked fifth in the nation among America’s wine-producing states, with more than $1.88 billion contributed to the overall economic value of Texas.

What better way to celebrate Texas Wine Appreciation Day than with a glass of Texas wine? Red or white, the Champion Wine Garden has an elite selection of Texas wines to choose from. Wine tastings also are available for guests who wish to sample several wines, at an unbeatable value. The Champion Wine Garden is the perfect spot for relaxation and is located just steps away from the RᴏᴅᴇᴏHᴏᴜsᴛᴏɴ® action.

Admission is free with the purchase of an NRG Park grounds pass or RᴏᴅᴇᴏHᴏᴜsᴛᴏɴ ticket; must be 21 years of age or older to purchase wine. For more information on the Champion Wine Garden, and how to schedule wine tastings and activities in Carruth Plaza, visit rodeohouston.com.