Aaron Franklin on how to smoke the perfect brisket. 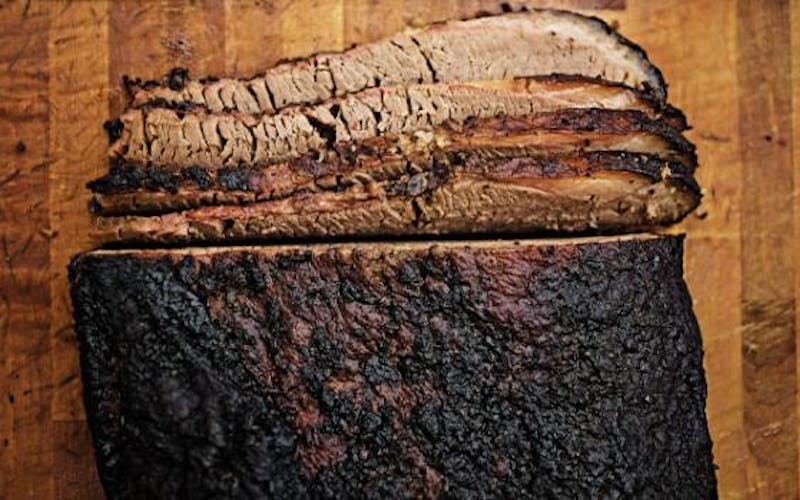 Why do we love brisket above all other barbecued meats? Is it because of its resonant beefy flavor, its exterior as shiny as black patent leather, its rivulets of fat moistening every mouthful and staining the eater’s shirt? Yes. The very nature of brisket is to be delicious. Yet there’s more to it than that. We love brisket because cooking it is a spiritual path, a quest that, as a wise man once said, begins with a single log. The steps toward enlightenment are threefold. The seeker of Brisket Truth must first embrace mental discipline, immersing himself in the craft of tending the fire and minding the meat. Second, the seeker must practice physical discipline, to be capable of wielding and slicing a twelve-pound brisket after having consumed a six-pack of Shiner Bock. Finally, the seeker must exhibit spiritual discipline, neither napping beside the smoker, nor wandering inside to catch the game on TV, nor sneaking off to update his Facebook page. The person who does these things is granted true knowledge of the brisket’s essence. He who honors this ritual is prepared for life.

How to Make It

You’ve driven to Lockhart for back-to-back meals at Smitty’s and Kreuz. You’ve talked your co-workers into two-hour meat-only lunches. You’ve written exasperated letters to a certain magazine about its barbecue coverage. It’s time now to put your passion into real practice. And who better to teach you how to smoke a brisket than Aaron Franklin? The 33-year-old Austin pitmaster started learning his chops as a kid—his parents briefly owned a place in Bryan—and later honed his technique by throwing many backyard barbecue parties, working for a year at the highly regarded Austin spot run by John Mueller (eventually buying his pit), and visiting the legendary joints of Central Texas. His sixteen-month-old Franklin Barbecue is the current sensation of the Texas barbecue world, inspiring road trips, feverish blog posts, and a blurb in Food & Wine magazine.

To cook a worthy brisket at home, Franklin says, “You want an offset smoker—that’s the style with a firebox off to one end.” (If you’re buying your first one, Pitts & Spits, Oklahoma Joe’s, and New Braunfels Smokers are all good manufacturers; count on paying at least $300.) His preferred woods are oak or hickory because “they taste best and burn clean.” Purchase a ten- to twelve-pound brisket—it will feed about a dozen people—that is well-marbled on the interior. Trim the exterior fat to between a fourth and a half an inch and rub the outside generously with kosher salt and coarse black pepper. While the meat is coming to room temperature, put some kindling and paper sprinkled with vegetable oil in the firebox. Once they’re burning steadily, add logs and let the temperature rise to between 225 and 250 degrees (an oven thermometer placed at grate level—very important—works fine). Hoist the brisket onto the grill, with the thicker end toward the fire and the fat cap facing up. Fill a foil loaf pan with water and put it as close as possible to the firebox. Then find a comfortable chair and read War and Peace. During the eight or more hours it will take the meat to cook—allowing 45 to 60 minutes a pound—watch the fire closely. Check the temperature every 20 minutes and adjust the vent, flap, and door to keep the heat even. Replenish the water as needed, do not poke the brisket with a fork, and, Franklin admonishes, “Do not turn it.” When an instant-read thermometer registers 195 to 203 degrees, the brisket is done. It’s best to take it off the heat a little sooner, though, because it will continue to cook. Let it rest for 20 to 30 minutes. Then slice it—fat side up, against the grain—and serve to people who deserve it.